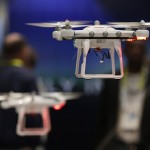 The last year has seen considerable improvement in the use of AI in drone technology, such as in the development of air traffic control systems.

There have also been considerable advances in the use of AI in the piloting of the drones themselves.  For instance, I wrote about a Swiss team that have developed a drone that can operate independently.

They have prototyped a drone that can construct it’s own 3D map of an unfamiliar environment with minimal input from a human operator.  It can then use this map to plot its own route around the environment.

The MIT based Skydio team are also developing similar technology to add a layer of autonomy to drone flight.

Their drone is capable of navigating for itself, just as with the MIT device, but also has the potential of following a human subject remotely, such as in the video at the foot of this post, when the drone follows people as they run and cycle.

Bringing the Technology to Market

A British startup is attempting to bring this kind of technology to the market.  The company, called Accelerated Dynamics, has developed software that allows for more intelligent control of drones, often removing the need for an operator altogether.

“Drone technology has limitless applications in numerous industries, but operating drones is expensive due to the requirement of a skilled human pilot. It seems strange that in an age of driverless cars and AR that drones are being manually operated when in fact they can be collaborating with other machines on the ground, underwater, in the air to achieve things that are beyond human capacity or extremely dangerous for a human to undertake,” co-founder Mantas Gribulis said to me recently.

“Accelerated Dynamics solves this with software that enables decision making capability not only for a single drone but for the whole fleet. Drone technology has been limited to military use but it is so much broader than that. Our software will enable humanitarian relief, border control and security services to do their jobs more effectively,” he continues.

The aim of the system is to allow drones to be piloted by non-specialists, thus hopefully lowering the costs involved with using the technology considerably.

They are already piloting their product with a security company that is hoping to use the system to better monitor properties, but there are also applications in areas such as humanitarian relief and conservation.

It’s an interesting approach, and you can see it in action via the demonstration video below.