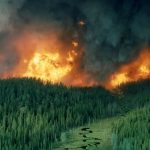 with climate change raising temperatures, wildfires have been a growing concern for many countries around the world. a new ai-based program, developed by researchers from the university of alberta, aims to utilize historical meteorological data to predict where and when forest fires might take place.

the software uses artificial neural networks to sift through the data and then predict where extreme weather events are likely to create the kind of conditions conducive to a forest fire breaking out. the system is trained on historical data, before then, making probabilistic predictions, which are in turn approved (or not) by expert researchers. if the predictions are not approved, the system modifies its approach and tries again.

of course, it can do this very quickly and is a good example of something that computers are inherently well equipped to perform as they can process vast quantities of data much faster than humans can. it is able to analyze a richer dataset than traditional forecasting systems. whereas existing systems usually rely on precipitation, temperature, wind, and humidity data, the new system also incorporates pressure fields. it's an approach the team believes gives the system a more realistic perspective on potential fire-risk conditions.

should high-risk conditions be identified, we might see drones playing a bigger role in tackling the ensuing fire. researchers at the university of nebraska have developed a drone to help safely manage the growing number of wildfires unfolding around the world.

"unmanned aerial devices have the potential to carry out key resource management strategies and could help us deal with something as big as the international increase in severe wildfires," the team says.

the team believes that the new drones could eventually take the place of manned aircraft and hotshot firefighting teams that are currently used in wildfire fighting scenarios.

both projects are good examples of how new technologies are helping to tackle a challenge that has huge human and financial implications.