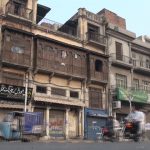 the last year has seen a number of interesting projects that monitor the vibrations of physical structures for signs of wear and tear. projects have been undertaken to use this approach to monitor machinery , rail crossings and the tracks themselves.

so it’s interesting to see researchers from mit proposing a similar approach to monitoring the health of buildings. they suggest that the movement of traffic next to buildings send ambient vibrations through the length of the building, which can be used to monitor the stability of the structure.

“the broader implication is, after an event like an earthquake, we would see immediately the changes of these features, and if and where there is damage in the system,” the authors say. “this provides continuous monitoring and a database that would be like a health book for the building, as a function of time, much like a person’s changing blood pressure with age.”

the team developed a computational model that was tested on the green building on the mit campus. the building had been equipped with an array of 36 accelerometers that were capable of capturing the vibrations on each of the 21 floors of the building.

the building was modeled in a computer simulation that was used to introduce various vibrations, such as that produced by a truck driving past, to examine how the building responded.  the key to the success of the model is the accurate representation of the building itself, and the researchers went through several iterations to get this as accurate as possible.

“we look at the foundation level and see what motions a truck, for instance, caused there, and then how that vibration travels upward and horizontally, in speed and direction, ” the authors say.

as the model was put through its paces, they were able to gauge how the green building had responded to the traffic trundling past over the 50 years of its construction.

“the building is safe, but it is subject to quite a bit of vibration, particularly in the upper floors,” the team explain. “the building, which is built on soft soil, is long in one direction and narrow in the other with stiff concrete walls on each end. therefore, it manifests torsional movements and rocking, especially on windy days.”

sending the model to work

the next stage is to further verify the model via a number of lab-based experiments that will utilize models of buildings that will be equipped with accelerometers and subjected to various vibrations.

they will also be testing the model out on a large, steel structure about the size of a cellphone tower.  these will help to further refine the model, before hopefully the model will be put to work monitoring the safety of buildings in cities around the world.

“i would envision that, in the future, such a monitoring system will be instrumented on all our buildings, city-wide,” the authors conclude. “outfitted with sensors and central processing algorithms, those buildings will become intelligent, and will feel their own health in real time and possibly be resilient to extreme events.”