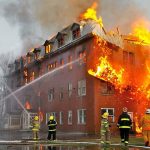 Fighting fires is one of the most terrifying professions imaginable, but I’ve written previously about ways in which technology might be able to help keep the men and women of the fire services safe as they enter burning buildings.

The Jet Propulsion Lab developed a system called AUDREY, which stands for Assistant for Understanding Data through Reasoning, Extraction, and sYnthesis, in conjunction with the Department of Homeland Security.

AUDREY is capable of tracking the team of firefighters as they enter a building, all the time sending them data that is personalized to their location in the facility. It is even capable of giving them recommendations on where and what to do next.

“As a firefighter moves through an environment, AUDREY could send alerts through a mobile device or head-mounted display,” the team said.

This approach is being taken to market by American start-up Qwake Technologies, which has developed an augmented reality system that they believe could help firefighters exit a burning building five times faster than would normally be the case.

The company has developed a technology, known as C-Thru, to provide firefighters with real-time navigation via an augmented reality display that is shown in the firefighters’ line of sight. They believe that the provision of this crucial information can significantly improve their ability to get the job done quickly and safely.

The system is designed to allow firefighters to see through smoke and utilizes machine vision algorithms that work with auxiliary sensors and wireless data to provide detailed situational awareness to the firefighter. The AR display provides them with thermal imaging to give them all the information needed to stay as safe as possible.

“It’s a next-generation augmented reality vision platform purpose-built to save lives,” the company said. “By providing firefighters with the ability to see through zero visibility conditions, we seek to re-define the future of fire and rescue through computer vision and augmented reality.”

It’s a nice example of how technology can be used to keep workers safe.