Chatbots and AI are rapidly developing and powering a new wave of customer engagement. It's not too late to pull ahead of the crowd, and Progress can help.

In my last post, we covered some of the background behind the rise of chatbots, their capabilities and the methodology for putting one to work for you. Today, we'll dive a little deeper and delve into the actual development of a bot.

Let's start with some examples. As a part of our exercise with the Microsoft Bot Framework, here are couple of bots we built: 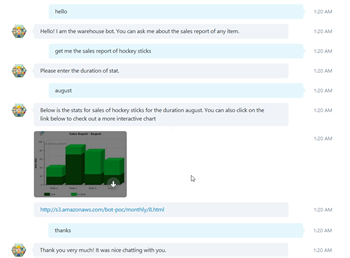 The first is a warehouse bot. It is capable of answering questions related to warehouses and stocks.

For example, you can ask for a sales report or the status of a stock in the warehouse and then configure it to notify you about depleting stock items if required.

The bot here demonstrates its capabilities to serve rich media content like Kendo UI charts and graphs, images, HTML, and more. The bot can be integrated into various channels like Skype, Outlook, SMS and many others.

Note that although rich media content is allowed, some channels might not support it — for example, SMS can’t serve the images. 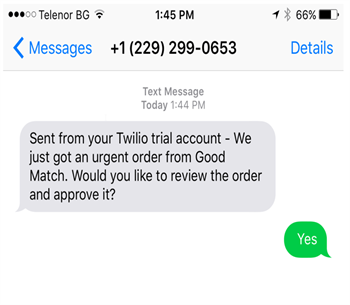 Another is the proactive notification bot. It notifies the relevant users about a new order being placed and acts upon it based on the response from the required user. What you see here is an SMS conversation initiated by the bot.

Again, the channel of communication can be SMS, Skype, Slack, Outlook, or another channel. This is to demonstrate that it is not always necessary for the conversation to be started by a user. Sometimes, when the bot feels it's necessary, it can start its own conversation.

Bots give you the power to establish meaningful, natural language communication among your applications, and the beauty of it all lies in the simplicity of the system. The system can be understood through just a few components.

Components Needed to Create Your Bot

This application does need training, and it requires definitions of the intents and entities for given sample utterances. For example, you can have intents for Greeting, Farewell, ProcessOrder, and many more. The more you train, the better LUIS understands. Here is a sample training screenshot: 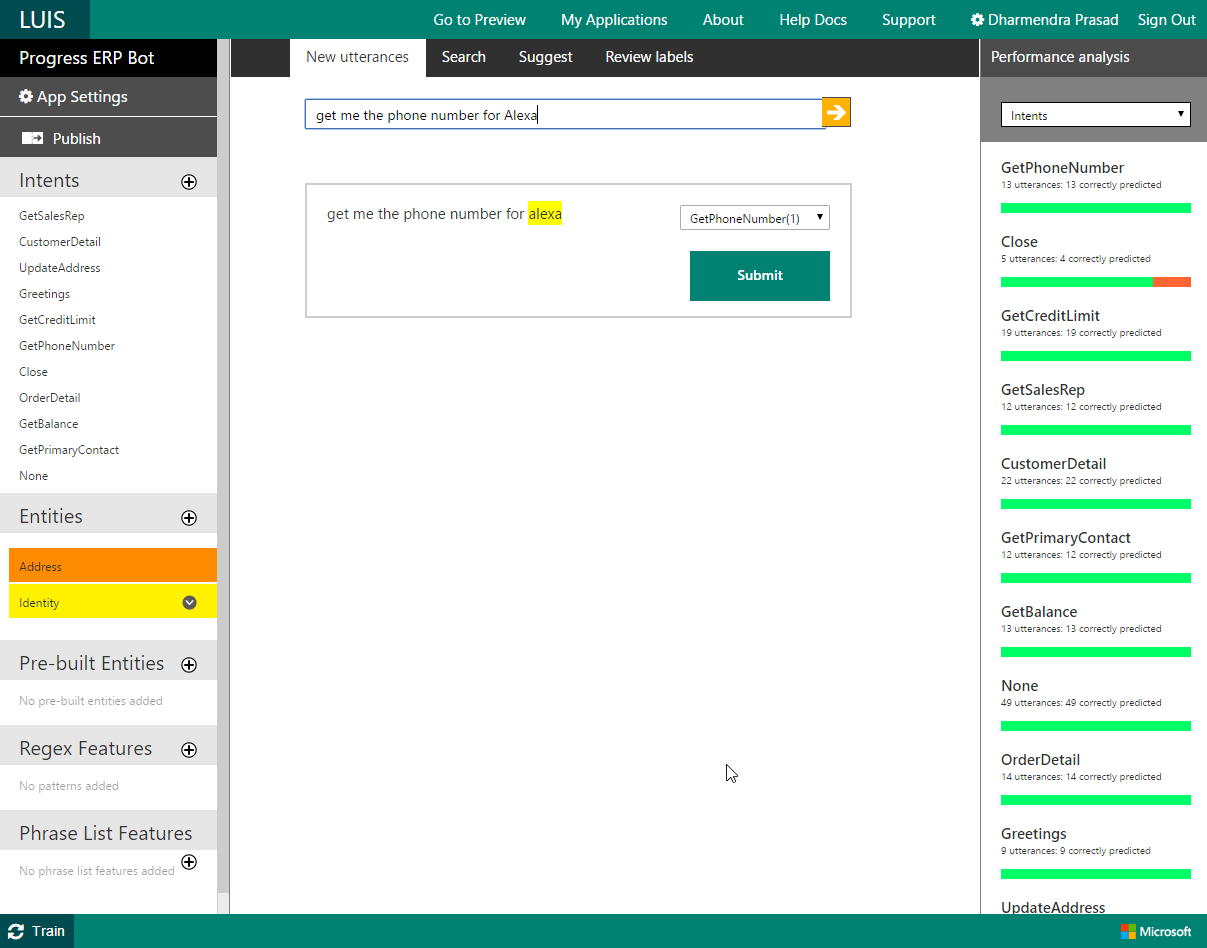 Architecture of the Progress OpenEdge Chatbot

Let's put these bot components together.

Below is an architectural representation of all the components and their interactions. The arrows show how data flows from the software client at the user end to the bot, and vice-versa. The purple box is the user client, like a phone, Outlook or Skype. The blue box is the Azure cloud, which hosts the natural language engine LUIS and bot framework. The green box contains the Progress specific pieces (the OpenEdge application). This exposes the REST endpoint and serves as the data store and actual bot application, which contain the business logic/intent handlers. 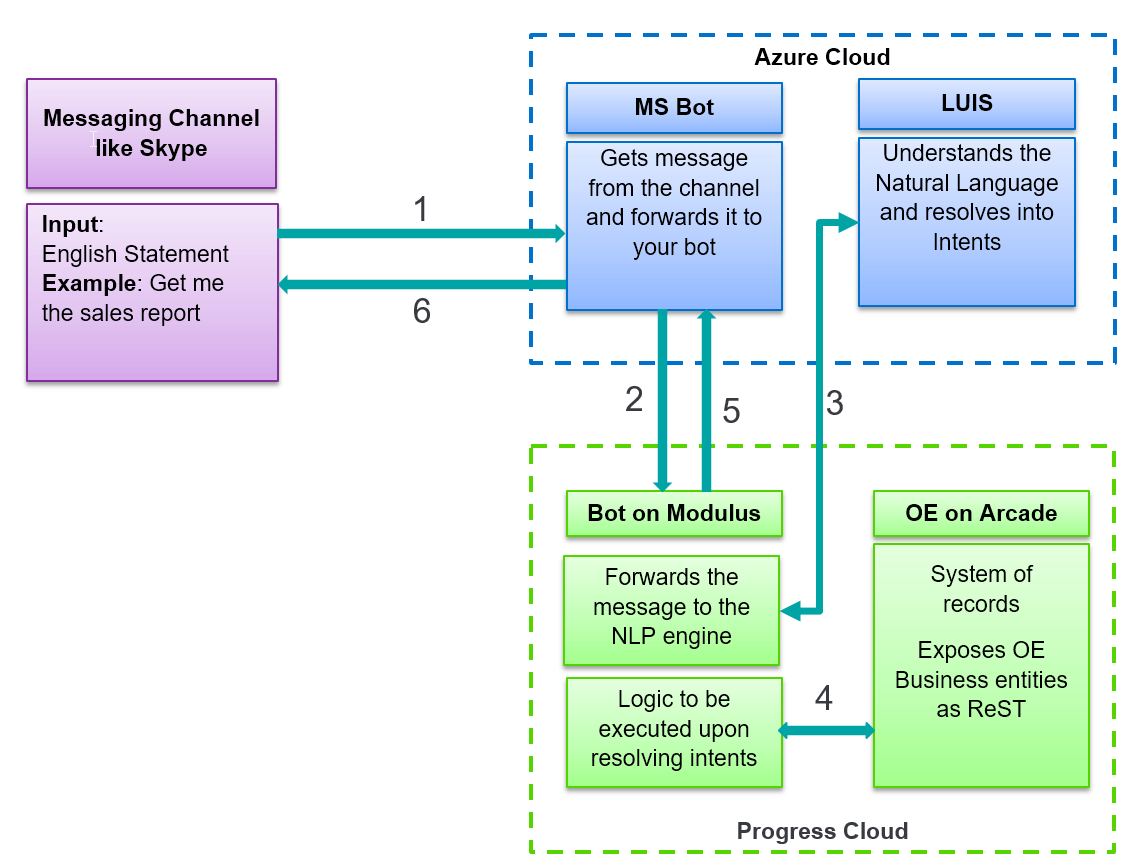 If a user types an English sentence on Skype addressing our bot, the message is sent to the bot framework, which knows the public URL of our bot deployed on Modulus. The bot knows the URL for LUIS and asks it to resolve the message. LUIS returns a structured JSON where it breaks down the message into intents and entities, and ranks the intents with scores as shown below:

Once the bot knows about the intent and entities of the message, an action can be performed. The action can be as complex as establishing a nested conversation with multiple rounds of question and answers, or as trivial as invoking a REST endpoint and serving processed results. 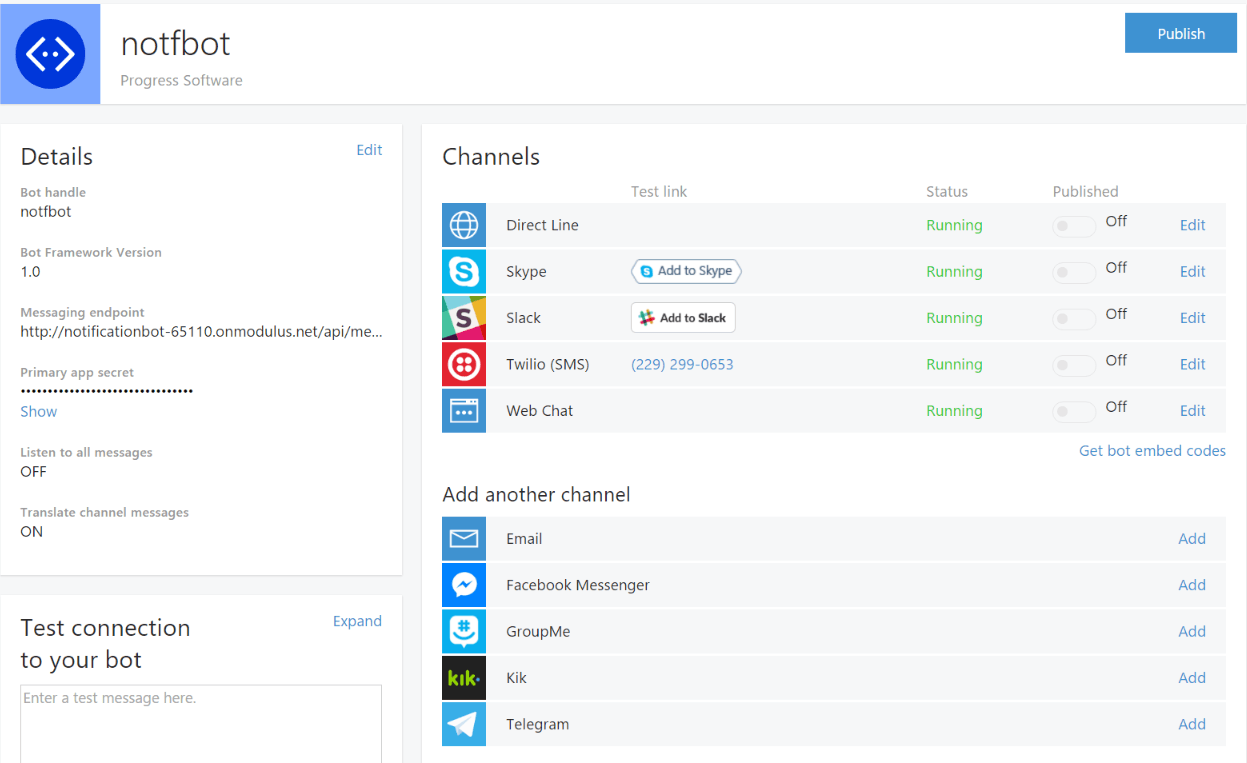 The bot framework portal pictured above shows the messaging endpoint is the public URL of the bot hosted on Modulus. Enabling a bot is as easy as clicking on the ‘Add’ link in the ‘Add another channel’ section.

The bot is running on the channels marked with a ‘Running’ status. Each channel has a specific set of instructions for enabling a bot on the channel. Once you add a bot, you will get a bot URL which can be directly sent to user, who can then add the bot to their local clients (Skype, Slack etc.). In the case of an SMS bot, you'd get a phone number . With Slack or Skype, it would appear in the bot registry as well.

Thoughts on the Development Experience

The framework, as well as many other aspects of the development, are in beta mode, so you can expect some changes to arise. However, you can participate in their roadmap and request some really interesting features for free.

Initially, I hit a few bumps (as I am sure everyone will), but the community was really active and helpful. I would suggest paying extra attention to the LUIS training. Defining clear intents is key, and getting enough sample utterances is equally important (around 20-30 per Intent is a fairly good number).

If possible, I would recommend getting subject matter experts to write sample utterances for you. There are infinite variations of a question, and there can be many responses to the same question, so templating the responses is a good idea.

It is also important to define thresholds for intent resolution. For example, LUIS resolves the utterances and assigns a score for each intent. The intent with the highest score is chosen. However, it is possible that the highest score is too small to be considered for an action. In such cases, you can define minimum thresholds and let the intents resolve to ‘None’ if it doesn’t suit you.

One of the powerful features of LUIS is active learning: it can critique its own work and ask you to relabel things if they don’t seem right to you.

Where Should I Look for Help?

The documentation for Microsoft Bot Framework is illustrative and nearly complete. If you want to look at the code samples we created to prove the idea, you can find them on GitHub. You can also find all relevant links on the GitHub ReadMe page.

If you want to start interacting with the bot, try adding the notification bot to your Skype using this link.

Alternatively, you can also e-mail me directly and I'd be happy to help.

This exercise was mostly focused on the easy integration of OpenEdge applications to the bot framework. However, I believe that the flexibility of the bot framework opens up a whole new avenue to integrate them with any of our products. I can imagine a bot welcoming a user who starts up Progress Rollbase, or assisting someone using Progress Corticon to build a conditional form like our bot lawyer example.

It's an exciting technology and we're always thinking of how we can improve our products to help you be more productive. What do you think of chatbots and where would you like to see them? Let us know in the comments.

Published at DZone with permission of Dharmendra Prasad. See the original article here.