With the advent of agile and continuous integration and deployment, continuous testing has become a requirement. There is no alternative to that. The emphasis on shorter release cycles to give the product an edge in the competitive market is crucial.
In the faster release cycles, maintaining the quality of delivery is a real challenge.

Let’s assume you build an accounts screen for a highly secured banking app. Now some of the users might be using Chrome to access the application, some might use Internet Explorer, some might use mobile apps, etc. Now in the mobile app also, some users may have an Android phone and some may have iOS. So while deploying the code on production, developers and testers have to make sure that the feature is compatible with all different OS, browsers, platforms.

In the traditional approach, the developer has to handle the environment-specific compatibility before each deployment. Containers save us from such dependencies. Containers provide a logical packaging in which applications can be abstracted from the environment. It doesn’t matter where it is going to run in a private data center, a public cloud, or a personal laptop. A container is a collection of code, environment configurations, dependencies all bundled together with an execution engine on a virtual machine.

A containerized test environment is often configured as close to production as possible. It gives a safe way to test a scenario in real-world like conditions before it actually goes to the real world. With the containers, you can get a well-maintained test environment without the implications of the development process. Test engineers can spin up the services and dependencies on their own test machines which would be available on production and run their automation suit.
So containers are here to make our lives easy.

An Example of A Container-Based Setup With Docker

Docker provides an API to operate containers in the state of resource isolation called Namespace. It does not launch the OS and thus makes it quite lightweight. For common test scenarios, 10 or more instances can run on a single server simultaneously. Clearly it is more efficient and gives enormous coverage for automation testing.

Let’s take an example of Selenium Grid. A Selenium Grid is used to configure the distributed execution of automation tests. It consists of a hub and many nodes. Each node can have a different execution environment and can be considered as a virtual machine. To set up a grid, we need to download the selenium server jar file and run it on each and every machine where we want to set up the grid. Docker solves this time-consuming task. To setup docker based Selenium Grid, we should follow these steps-

The advantage of this approach is that once set up, it proves to be very efficient in case test cases need to be run on different operating systems and on multiple browsers. In those cases, we can set up Selenium Grid with Docker.

Orchestration: One Step Ahead of Containerization

Automating the containers, how about this idea? So here comes Kubernetes which automates containers. This process is called Orchestration.
Let’s understand first, what Kubernetes is, and how it works.

Let’s have a look at Kubernetes architecture for a typical application: 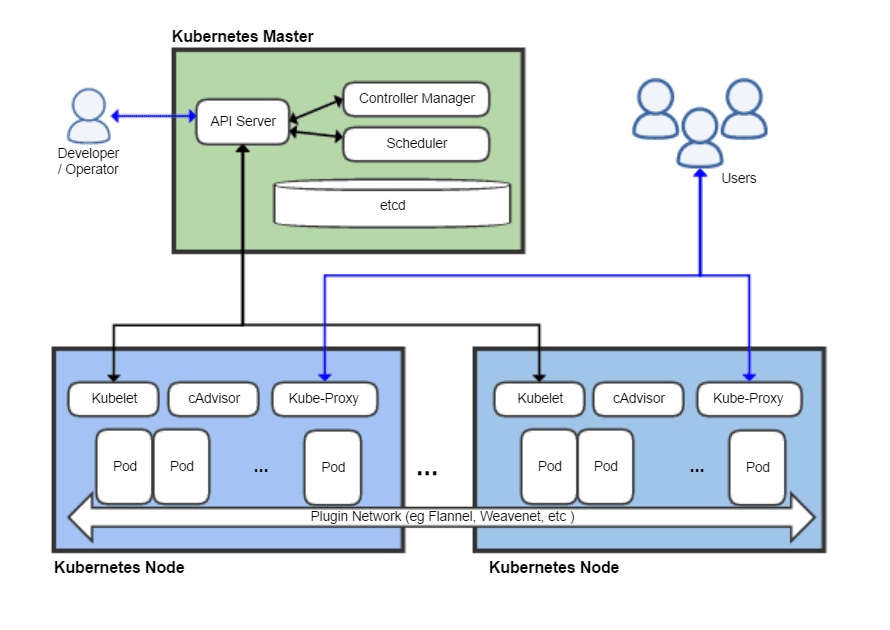 The containers are called as ‘Pod’ in Kubernetes terms. So a single Kubernetes node can have multiple containers. As we know that development, testing, and deployment are integrated, it is essential to be ready to adopt that in testing as well. Lets us examine the advantages of using containers and Kubernetes clusters in automation testing-

Moving from traditional automation solutions to a fully automated and lightweight solution using containers and Kubernetes can be really efficient if there are a large number of test cases. Also, it makes room for integrating it with the DevOps pipeline and moving testing to shift left.

So this can be proved to be a well thought off approach for enabling continuous testing in an agile environment. To know more, visit https://cloudqa.io/ or email us at .

Published at DZone with permission of Sumant Mehta . See the original article here.