When does the business need it? is far more important than When will the developers have it ready?

Business needs should drive schedules and engineers need to create solutions which fit within business schedules. That does not mean cutting corners. It does not mean shipping with bugs or technical debt. It's the art of the possible and it's what engineers have always done.

One of the tenets of #NoProjects is that work should be guided by business benefit, better still value delivered.

That very quickly means that one needs to start talking about opportunity cost of delay. As I’ve said before, I don’t think “cost of delay” is the best name for this idea, I’d rather it was called something like “benefit foregone through delay” but cost of delay is the name we have.

Once one starts discussing business value and how potential revenue changes over time it very quickly becomes clear that business need and value should drive the development schedule, not developer estimates.

How long will X take to build?

We need to be saying:

Given that there is M money to capture, in timeframe T, what can we build for that much money in that much time and have a respectable profit left?

Time and money are inherently linked. Everyone gets that more time creates more costs but fewer people get that more time probably means less revenue.

To put this more succinctly:

How much of X can we build in time Y and how much of the total potential value M will that capture?

Let me do an example analysis to show how a cost of delay analysis — with value estimates — can be used to substitute effort estimates. So here goes, I'm putting on my economist hat... Let's set up the scenario.

Imagine it's Christmas 2016. At one of your family gatherings, you see Uncle George who works for a successful start-up. George says the back-end he has been working on is great and has a nice REST API. The start-up wants to grow an ecosystem and the company is about to open the API up to third party apps. The startup will pay a small "finders fee" from 1 February for the first few months to each of these third parties for each customer they bring in.

Back in the office on 2 January you make some calls and find everything Uncle George said is true. In fact, the start-up is falling over itself for help — they are desperate for apps.

You have an opportunity. And you have at least a four-week head start on any competitor.

Some quick "what if" calculations tell you there is €10,000 a week to be made. But you also know that competitors will come into the market the finders fee will decline. As you have a 4-week head start, you probably have 4 weeks from the start of February before your revenue starts to fall off.

After more analysis, you conclude competitors will steal increasing chunks of your revenue and you think it will decline €1,000 a week after February. Thus you can draw the following graph: 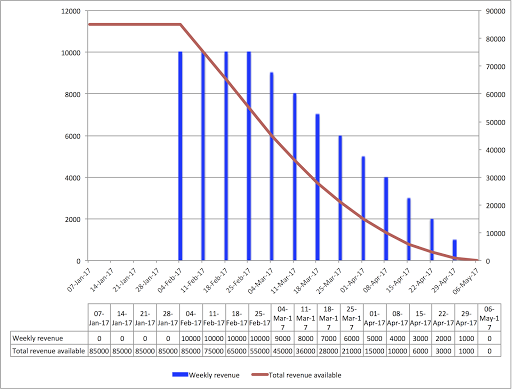 The blue bars show the weekly revenue. The red line shows the total lifetime revenue — the lifetime being from the start of February to early May. What happens after May is uncertain so to play it safe you have assumed no revenue at all.

The red line is important.

It doesn't matter whether you release your product tomorrow or 31 January, there is no extra revenue to be made during January. As long as you have a product in the market on 1 February, you can start to capture some value. If you have a fully functional product then you can capture €10,000 a week.

Yes, the delivery date is important, earlier is better, but so is the amount of product. Since revenue declines from March onwards delivering something smaller sooner may well make more total revenue than delivering more later. Less (functionality) may well mean more (revenue).

As you can see, releasing a product anytime before the end of January will result in €85,000 of revenue in total. After this the later the product is released the less revenue if will make. Your deadline is not a binary event, it is an elastic range of options which each produce a different outcome.

This analysis does not use any effort estimates; it does use value estimates. So let's now consider effort.

In the first instance, armed with this analysis, you go to you development team and instead of saying:

How long will it take to build this?

Given this analysis, what can we build in the next four weeks which can capture some of this value?

It is not a question of:

Can you build X?

What can you build in this time for this much money?

Let's suppose you and the team quickly envisage a product — a product that can be rolled out in stages, say 10% per week. Even the first 10% will be useful. Let's assume a perfect correlation between the percentage of product built and the revenue captured and let's add this to the model. 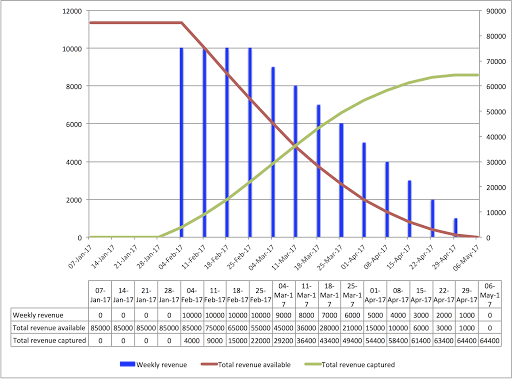 Notice in this model it is impossible to capture all the €85,000 potential revenue because the product cannot be ready in full on 1 February. If you wait until the product is 100% complete before releasing it will be mid-March and you will only make €28,000 in total. This contrasts with the €64,400 you could make by launching with reduced functionality earlier, i.e. launching a smaller incomplete product earlier allows the capture of €36,400 more.

As I said before, I could relax some of my assumptions and enhance the model but I’m keeping this simple.

You can also play what if games, for example, what if you halted development at the half way point?

After all the product only has an anticipated lifespan of three months. Once March arrives the product revenues are falling, why would continue to invest?