Docker has been a lifesaver for Eclipse Che. We originally made the choice to use Docker as the engine for workspaces starting in 2013, but its power has extended beyond offering a convenient runtime for developers.

We’ve applied Docker to our installation and product using a variety of container patterns. The one we get the most benefit from has been Docker’s cross-platform portability. Earlier this year, we rewrote our Che launch and management capabilities using Docker. We saw that Docker provided a common syntax that ran (mostly) the same on every operating system that Che needed to run on and we wondered if we could solve historical complexity problems we had with installation and operation of Che, by giving users a universal syntax.

Eclipse Che has gone through a few different incarnations. It’s currently in its fourth generation and we are working diligently on the fifth generation due this Fall.

At its core, Che is a server that runs in a Tomcat or equivalent engine. Tomcat is well-tested and there are thousands of developers around the world comfortable with the intricacies of starting, stopping, and configuring Tomcat. As such, our first release of Che provided utilities that were Tomcat wrappers. Developers were still obligated to set certain OS-specific or Tomcat-specific environment properties. We figured that this would be well understood along with the breadth of materials available on Stack Overflow on how to configure Tomcat.

While Tomcat is fast to boot and easy to configure with different logging levels for debugging, we ran into a number of community challenges:

These issues, all minor individually, add up to a collection of issues that cause new product users to pay attention to aspects that distract from the product’s core value proposition. We recognized that we needed to minimize the time between user awareness and product usage.

Che as a Docker Container

In 2014, we advanced further by packaging Che as a Docker container. The Docker container would package Tomcat and Java, configure necessary SSH keys, add the appropriate users, set the internal configuration, and provide utilities to start and stop Tomcat in accordance with our best practices.

This led to a common way to start and stop Tomcat, right? The only thing a user would need to have installed is Docker, so the underlying dependencies would be more consistently applied. We ended up with a new type of syntax:

The syntax is straight-forward, but there are four volume mounts, which can be daunting. The volume mounts are not necessarily symmetrical. Notice the difference between /lib and /lib-copy, which is a special mount that we use to allow Che to send files from inside the image to reside on the underlying host. And there is the necessary :Z syntax for SELinux. While the syntax is universal, this posed some new and interesting problems:

8. Since users are not using Docker, if they are not careful and income --rm, then they can end up with a lot of leftover containers cluttering up the system, and they are not sure which ones they should keep or remove after they have stopped running Che.

This syntax was not sustainable.

Earlier this year, we decided to rewrite the Che CLI and we wanted to solve these basic problems with incompatibilities between different operating systems, different versions of Docker, and different tactics for volume host mounting. Also, this was an opportunity to convert Che into a 12-factor application where there is a single, consistent way for configuring all properties, whether they are system or Che properties.

Docker to the rescue! Why not create a specialized terminating Docker container dedicated to invoking and managing the Che server Docker container with all of its nuances? We could create a container that provides its own Docker CLI, accepts only environment variables as properties to be configured, and then has the internal logic to understand the underlying host operating system, the location of the Docker daemon, and how to launch the Che Docker container, which would be non-terminating.

This basic architecture allowed us to simplify the launching capabilities for any operating system.

And all system configuration would be done with environment variables that a user can pass into the system such as:

How did we do this? 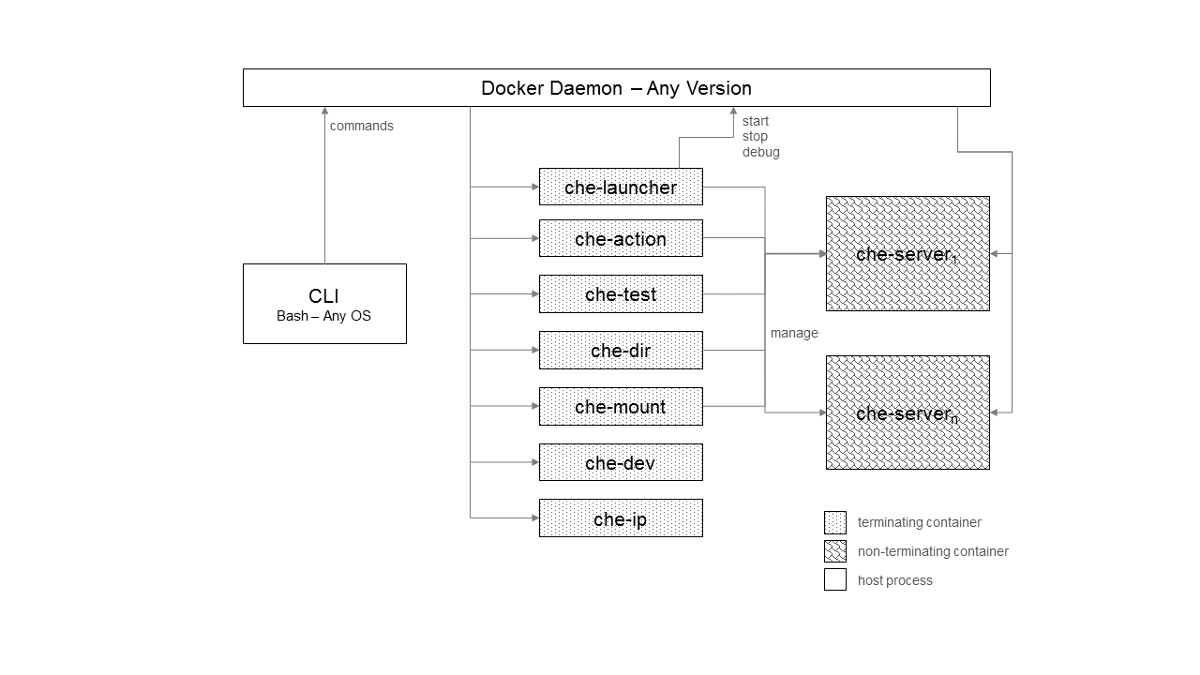 In this case, the $@ is the remaining parameters to be passed to the Docker exec command, and those come from a chained set of method calls that each of which optionally append additional parameters to the docker runsyntax based on the values provided by the user. You can inspect how we do this by reading the chaining here.

Now that we had the basic ability to manage the Che server packaged in a specialized che-launcher, we wanted to further simplify how users can gain access to the launcher with a CLI.

Also, we were going to package up different functionality for Che using different Docker containers. So, in addition to the che-launcher container, we would have specialized containers for performing remote workspace synchronization, compiling Che source code for developers, synchronizing and SSH access for local IDEs with remote Che servers, and performing other system tests such as networking tests or debugging. In essence, we were building an entire library of specialized Docker containers that can perform cross-platform functions that users and project maintainers could use!

We needed a CLI that would consistently run on any OS that could further simplify the access to Docker and provide a consistent experience across the variety of utility containers that we provided.

Bash and Docker to the rescue. Since we required all of our users to have Docker installed for Che to operate, that installation came with requirements that would essentially guarantee that bash would also be installed on all of those systems, even Microsoft Windows.

So we built the Che CLI using a layered bash script, which would operate consistently on different operating systems and be self-updating. The bash script performs basic health checks for Docker, detects the host operating system, loads pre-set environment variables or profiles defined by the user, and then passes along the proper values into the che-launcher (or other utility container) for execution.

We placed the CLI into the root of our source code repository, and then enable people to curl the images to their disk.

Not all people have curl on their computer, so we actually had another version of this that used Docker to install the CLI, of course. You can use Docker to send files that are inside of a container down to the host operating system. Unfortunately, the syntax for this is a bit tricky and it actually made the syntax a bit more unfriendly for users. You do this by mounting two folders inside of the delivery container. One folder has the files that you want to deliver, and the other is the destination of where they will be delivered. Inside of your container, when it starts, the container must copy the files from the first container volume into the destination mount so that they appear on the host system. This is required in order to avoid overwriting files that are already on the host. Unfortunately, this requires the user to do a volume mount that doesn’t make a lot of sense, so instead, we just give a straight CLI download using curl.

Even if users do not have curl on their machine, there is an easy way around that — Docker, of course. You can just have users type docker run --net=host appropriate/curl <curl-command>.

There is some amazing stuff in the CLI — it’s great what bash and Docker offer to users. You can inspect the CLI and how it sets values, grabs the current profile, and provides self-updating syntax by taking a look at two files in our GitHub repository.

Since we have placed the new che-launcher and CLI into production three months ago, the number of tickets related to configuring how Che runs has dropped by 80%. The only dependency is getting Docker installed, and with the advent of Docker for Windows and Docker for Mac, users are increasingly able to get Docker installed quickly and painlessly, giving us a robust cross-OS platform for running and building software.

I’d like to thank Mario Loriedo, an engineer at Red Hat, for his contributions and advancement in the thinking that has allowed for this. He told me:

Docker container patterns are fascinating — way beyond the limits of microservices, open a completely different world of application architecture