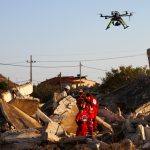 drones are increasingly being used for search and rescue operations. for instance, last year i wrote about a swiss project that uses drones as a more effective way of rescuing hikers. swiss authorities say that roughly 1,000 call outs are made each year for lost or injured hikers.

these call outs can often take a significant amount of time, both to locate the lost individuals, and to then rescue them from the mountainside.

the drones , developed by a team of researchers at the university of zurich, promise to make the process quicker and easier, thus helping more people each year.

the drones come with a deep neural network that allows the device to learn the numerous trails and paths in a mountain range. each drone is fitted with a range of cameras that are capable of detecting man-made paths.

this accuracy, coupled with the speed of the drones, make them an incredibly effective tracker for locating stricken hikers, and therefore a potent aid in search and rescue missions, whether they be in mountain ranges or other similar situations.

historically, robots had an extremely difficult time identifying human voices. being able to give a machine ‘ears’ involved a complex mixture of signal processing, robotics, and artificial intelligence. successful development requires sound source localization technology, so that the device can understand where the sound is coming from, sound source separation technology, so that the machine can understand the direction the sound is coming from, and finally automatic speech recognition technology, so as to accurately distinguish signal from noise.

a team from the tokyo institute of technology have developed a drone capable of doing all three, even in challenging weather conditions. an initial prototype has been designed to assist in the recovery of victims of natural disasters.

the team hopes that their system will function even in the most adverse weather conditions. as the chances of survival reduce dramatically after 72 hours, time is of the essence. they believe that their system surpasses existing efforts because it functions just as well in poor conditions as in optimal ones.

considering that many victims of natural disasters will be buried, in the dark or in other obscured positions, this ability to operate in sub-optimal conditions could prove invaluable.

the team will continue to develop the technology, with plans to improve usability and make the system more robust. they will also perform more testing in simulated disaster conditions.

“one goal is to add a functionality for classifying sound source types, instead of simply detecting them, so that relevant sound sources from victims can be distinguished from irrelevant sources. another goal is to develop the system as a package of intelligent sensors that can be connected to various types of drones,” the team said.