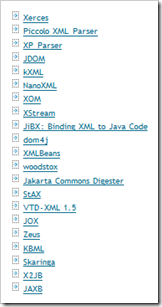 the proliferation of xml for data interchange and configuration file format have resulted in numerous open-source java xml parser libraries (left image). indeed, java includes its own full-fledged xml library obviating the need to download additional xml library. however, the in-built and majority of open-source java xml parsers tend to suffer from few considerable issues like complexity and bloated size, and this tend to be normal rather than exceptional.

this is because the majority of  java xml parsers are designed for enterprise usage and therefore the support for latest xml technologies like xpath, schema are built  into the libraries resulting in increasing sophistication and bloat. moreover, most of these libraries actually reuse additional external libraries which greatly increase its size and complexity and prohibit its widespread usage in development of desktop and mobile applications (majority of open-source projects suffer from poor documentation and support, and combined with their complexity give java a undeserved bad name). in addition, the large library size and overwhelming complexity are just overkill if one just want to use xml in rudimentary way (like configuration file, data download through web 2.0 service eg amazon).

therefore a simple and easy-to-program solution is needed if one want to bundle it with mobile, applet, desktop solution that will be downloaded and deployed.

nanoxml is just the perfect java xml parser solution for those who value ease of use, simplicity and compactness. as its name implies, it is unprecedentedly lightweight and compact in size, taking less than 50kb (after modification) in space while still retaining important functionality ( a far cry from megabyte-size java xml parsers). even though its development becomes inactive since 2003, its current version is still very much useful for processing simple xml stuff.  it may not support the advanced technologies like xpath, schema, however it is definitely capable of holding its own through its rich and easy api for searching, adding, updating and removing xml tag and attributes.

the reasons that i prefer nanoxml over competing solutions are because it is very simple to use, extremely compact, very fast and most importantly, it is much easier to extend its feature due to ‘lesser advanced’ features. its compactness is particularly enticing for application that need to be downloaded over the web. in fact, nanoxml becomes a important component for those current projects i working now. this includes replacing the xml handling mechanism in gwtclassrun currently using string manipulation with nanoxml as having java xml parser will make xml processing more robust and easier to maintain.

despite nanoxml in its current version 2.2.3, is a very useful library, it could definitely be made more flexible. few caveats of nanoxml remain in this version that might deter its usage. currently it ignores all comment in xml. another problem is that adding of tag element can only be added to the last position. these limitations may deter others from considering it as a viable solution.

the modified codes and binary are available for download

rename the file to nanoxml-224.zip because wordpress.com does not allow zip file to be stored in its service.

for documentation and support, please check the nanoxml’s original site .

note that the last official version is version 2.2.3 . since i have modified the code, i unofficially distinguished it by making it version v2.2.4 without official approval from the author (after failure to receive reply from email) 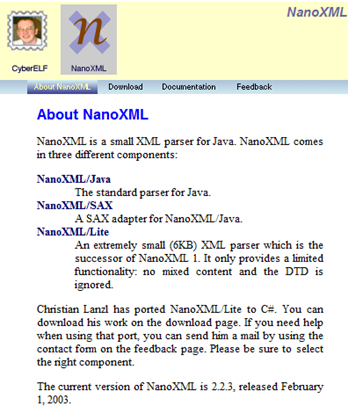 note that the changes is only made for nanoxml-2.2.3.jar file, not the lite or sax version 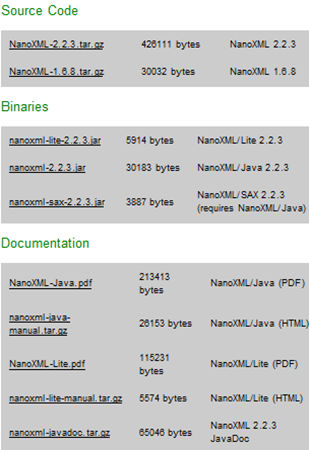 for those who want to learn about nanoxml and the use of ‘enhanced’ features, the following is the example.

after running the code against the testfile, the output should display: