Previously, we looked at how to use GridGain and Kafka using a local installation. Let's now look at an example where we deploy in the Cloud. We will use the GridGain Cloud and the Confluent Cloud environments.

If you'd like to follow along with this example, ensure that you meet the required prerequisites first:

We'll follow steps 1 and 2, as described. At step 3, we'll create the following topic:

Our example will simulate sensor data that are being generated (produced) and subsequently captured (consumed) for further analysis.

Note that there is a cost per hour associated with launching a Confluent Cluster with a monthly billing cycle.

First, we'll need to create a new project in an IDE using the pom.xml file that is provided with the sample Java code from GitHub, as shown in Figure 1. 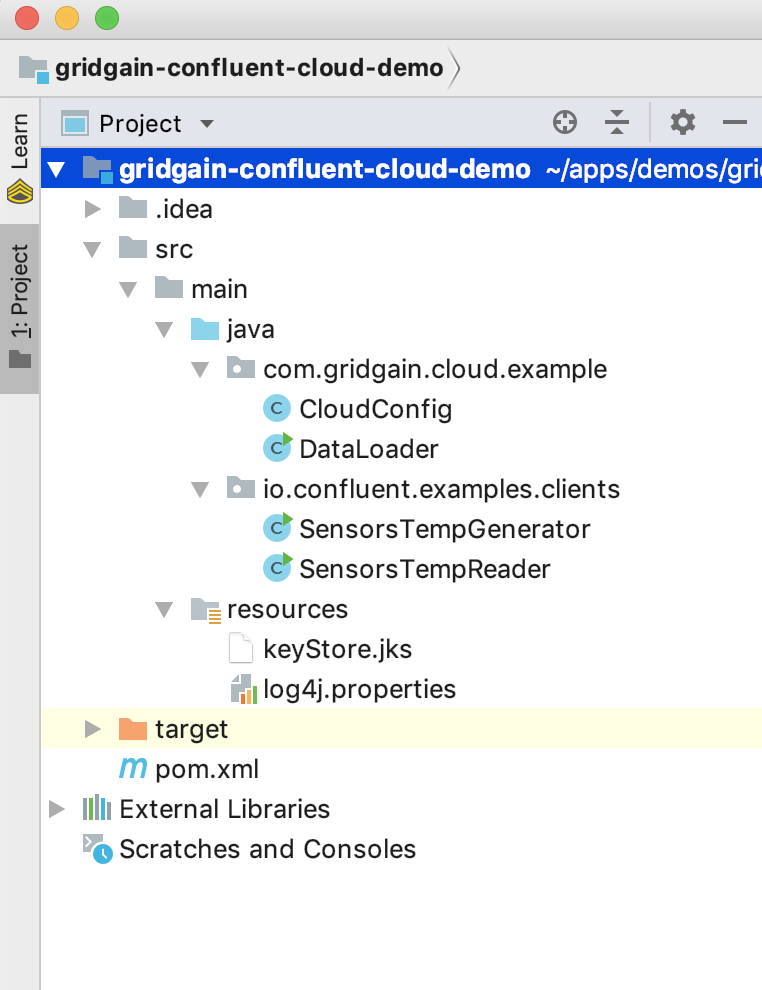 Next, we'll deploy a GridGain Cluster in the GridGain Cloud. The Getting Started guide provides all the necessary instructions. We'll use the free tier.

Once the cluster is running, we can get further information by clicking on the cluster name, as shown in Figure 2. 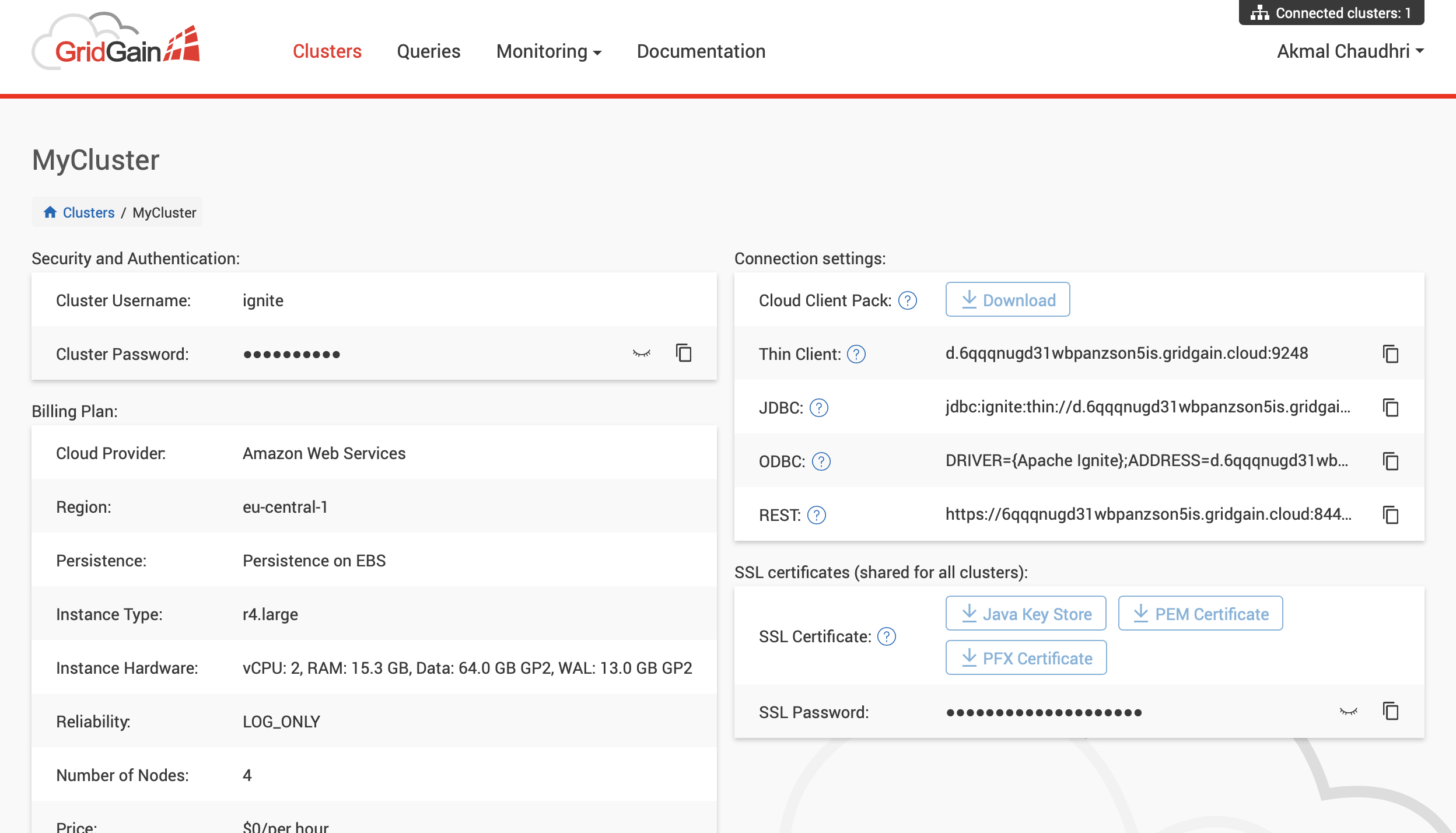 Next, we need to plug these four values into the CloudConfig class in our Java code and save the changes.

Now we'll download the Java Key Store and save the keyStore.jks file in the resources directory in our project.

We'll now create Sensor and Temperature tables in our GridGain cluster by running the DataLoader class. We can check that the tables have been correctly created by using Monitoring > Dashboard from the GridGain Cloud Console, as shown in Figure 3.

From the command line, we'll navigate to the gridgain-confluent-cloud-demo directory and build everything from sources using:

We'll run the producer from the gridgain-confluent-cloud-demo directory, as follows: 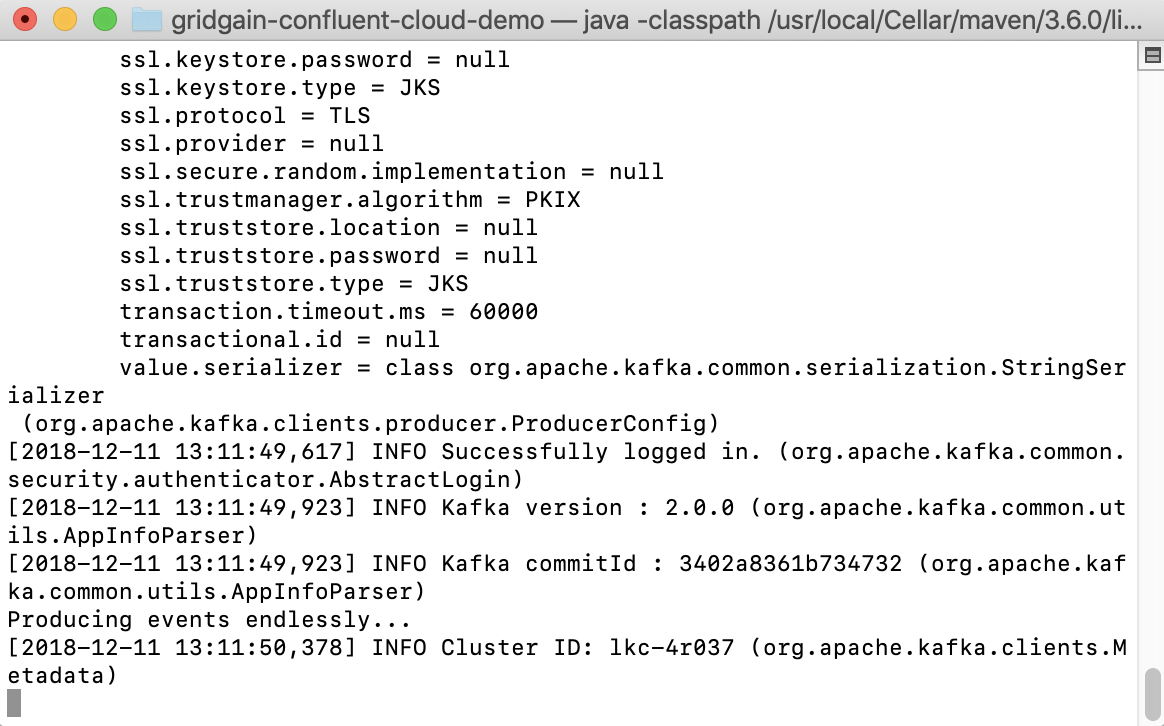 In another terminal window we'll run the consumer from the gridgain-confluent-cloud-demo directory, as follows:

The output should be similar to Figure 5. 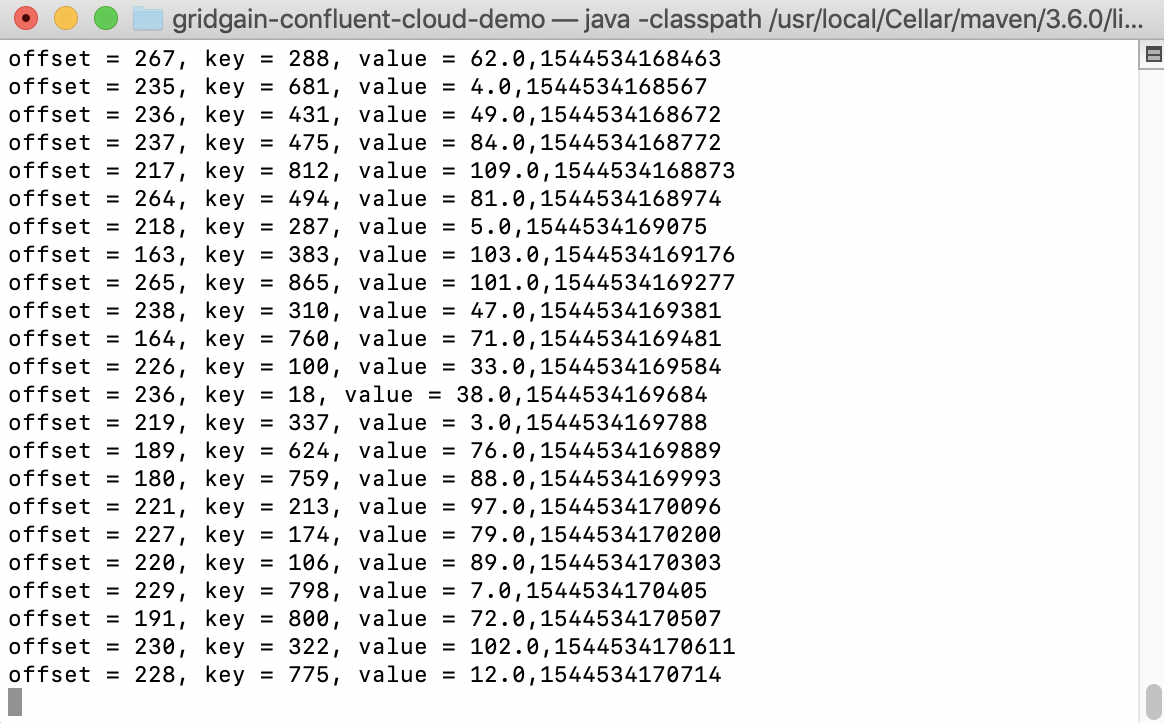 We can check that the Temperature table is receiving data by using Monitoring > Dashboard from the GridGain Cloud Console, as shown in Figure 6.

If we compare Figure 6 with Figure 3, we can see that the Temperature table has grown larger.

Now we can try some SQL queries from the GridGain Console. From the Queries tab, we'll create a new notebook and run the following queries and view the output:

These are examples of the types of queries we may wish to run on the sensor data, using ranges and latitude/longitude, for example.

To stop the example, we can remove the topic from Confluent Cloud:

and delete the existing Temperature table values from GridGain Cloud:

When we are finished with the Cloud environments, we can also delete our clusters on Confluent Cloud and GridGain Cloud.

In this second article, we have seen the ease with which we can use GridGain with Kafka using cloud environments. The sensor data example represents just one possible use-case where we can receive data, store it in GridGain, and then perform analysis on the data using SQL.