After the successful release of JDK 9, we can already look forward and play around with early access releases of JDK 10. The list of JEPs currently targeted for JDK 10 is quite manageable so far. JEP 286 is probably the most exciting one for most Java developers: Local variable type inference (which we’ve blogged about before). You can read the JEP yourself, or just go get the early access release and play around with it.

One of the nice things about this new feature is the fact that we now get access to non-denotable types that were previously rather clumsy to work with. For example, this is now possible: 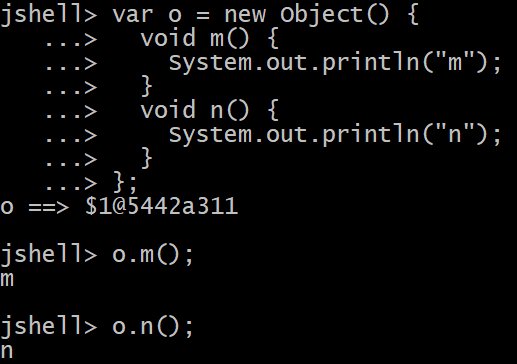 A rarely used feature are methods in anonymous classes that do not override/implement a super type’s method. They are available only in a very narrow scope. Prior to Java 10, we could only call either m() or n() on such a class, using the following syntax:

The language feature wasn’t too useful. Only one method could be called from the “outside” of the anonymous class, as the instance reference will have gone quickly. With Java 10, we can assign the whole expression to a local variable, without losing the anonymous type.

On a side note, Java always had a funky and weird love-hate relationship with structural typing, trying to be a mostly nominally typed language. Yet, as we can see in this example, another new kind of structural type has snuck into the language. Cool!

What Does This Mean for jOOQ?

jOOQ has some cool types. Just look at the API:

Ultimately, depending on how many columns you want to project in your SELECT statement, you’ll get a different Record[N]<T1, T2, ..., T[N]> type, e.g.

What’s nice is the fact that there is record-level type safety, i.e. you know that the record has 3 columns and that they’re all of type String. What’s less nice is that in order to profit from this type safety, you have to actually write down the type, which can get laborious (both when writing and when reading it), e.g. when you select 16 columns or more.

I.e. using the keyword “var” (or “final var”, if you prefer) to create the loop variable. And it will still be type safe. For instance, you cannot call r.value4() on it:

This isn’t a game changer, but for folks coming from Kotlin or Scala, it is a big relief to see that this option is now given to Java developers too.

And this isn’t just useful for results in jOOQ. You can also use it for creating dynamic SQL, e.g.:

So, clearly, this is going to be a really really useful Java release for jOOQ folks.