Microsoft's Azure is what I consider the go-to for most C# developers looking to get their feet wet with cloud development, but it's not the end-all (some may think so) for cloud providers.

In my last post, I mentioned the three big names of cloud providers: Microsoft Azure, Amazon Web Services, and the Google Cloud Platform.

Do the other two offer some .NET goodness to compete with Azure?

In this post, I provide a quick brief on Amazon and Google's offerings to the .NET community.

I know Azure has been around for a while, but lately, when you mention web services, the one company that comes to mind is Amazon Web Services.

Not only do they have a way to create a .NET website, they even have a Visual Studio Extension for AWS.

I'm wondering if a newer version will arrive since Visual Studio 2017 was just released.

Once you get the Visual Studio extension installed, you can start with the Amazon Web Services .NET Quickstart.

Their version of Microsoft's App Services (websites) is Elastic Beanstalk.

Once you've built your website, you can easily upload the site to Amazon's Elastic Beanstalk through Visual Studio.

Ever since I heard Google used C++, Java, Python, and JavaScript, I thought Google was the last company to even glance over at C#.

However, with their cloud platform, I'm pretty sure they wanted to compete and support a number of languages to lure other developers into their cloud offerings as well. 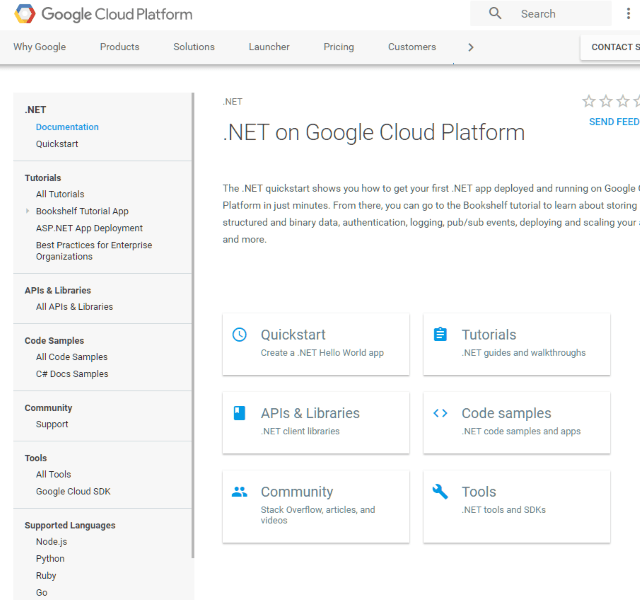 After looking over their .NET documentation, it's definitely well organized and informative. As a sidenote, other languages supported besides .NET include Node.js, Python, Ruby, Go, PHP, and Java.

To get started, I'd recommend:

With Google now supporting the .NET platform, this provides another avenue for developers.

Of course, I will probably be using Microsoft Azure for my cloud services, but it's always good to see what the competition is up to as well.

The purpose of this post was to make .NET developers aware of other cloud-based services to provide an alternative choice.

And personally, I've been looking over the cloud landscape for the past month and didn't even realize these options were available on these platforms.

With the cloud becoming more of a necessity in a developer's career, Microsoft, Amazon, and Google continue to make their cloud offerings better than the competition and try to entice developers over to their services instead.

With .NET becoming more relevant on cloud platforms, this gives developers another opportunity to utilize C# to build not only cross-platform solutions in Windows, Linux, or iOS, but to also provide numerous cloud platforms (cross-cloud?) to host your website where it makes the most sense.