In our workplace, like in many other big firms, government offices, and banks, the internal network is isolated from the outside world. Nothing goes out and nothing goes in. But, how can you conveniently work with open source libraries if you cannot use Maven or npm (and other repositories) to fetch needed libraries?

Nexus, and other similar products can be installed in pairs, to bridge between networks. But as far as I know, that topology can only work in synchronous mode and you cannot add your own asynchronous checks like using sandboxes or anti-virus checks — and that can be a problem. Plus, we wanted to use only the free, open-source version of Nexus (OSS), as we try to rely on open source as much as possible.

So we came up with a solution for that, drawn here: 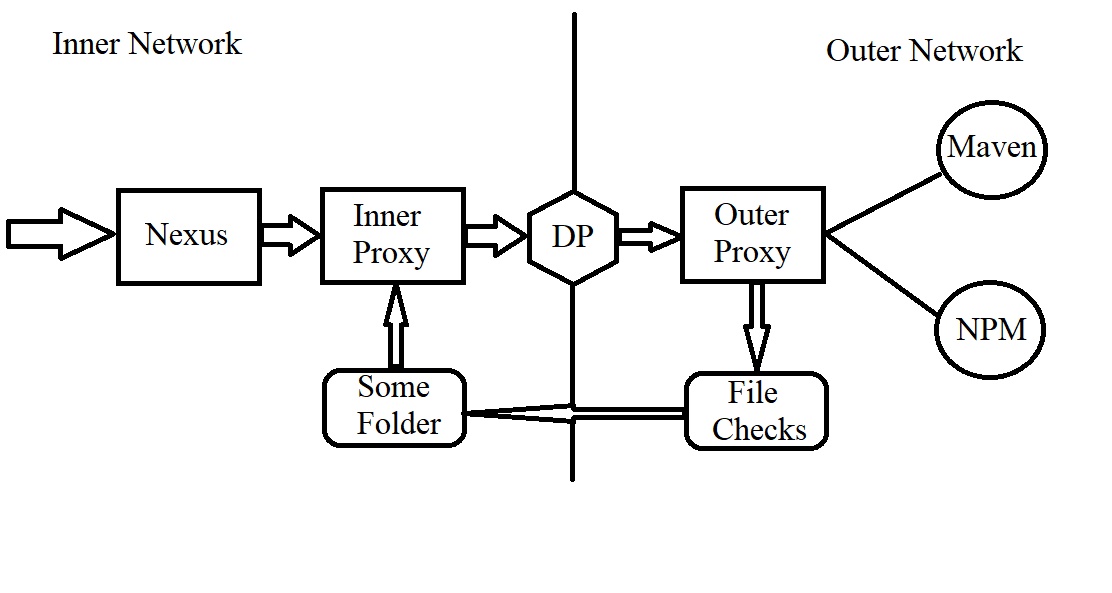 Basically, we act as a proxy to the internal Nexus, receiving its requests (initiated by developers issuing  mvn install or  npm install  commands). Next, we pass the requests to the external network via IBM’s Data Power (which verifies the request, in case someone tries to exploit the endpoint — similar products exist as well). Data Power passes the request to an external proxy, with internet access. This external proxy downloads the required library, along with all its dependencies, and passes it on to the organizational file checking system (sandboxes, antivirus, etc.). If the file is approved, it is copied into the internal network (via a vault or a similar mechanism). There, the internal proxy comes into live again, picks up those libraries and uploads them into Nexus. Then the developer can retry to fetch the libraries and...  voilà! The libraries are there and he can use them in his code.

The inner proxy is a Java Spring Boot application. It has two parts:

The outer proxy is also a Java Spring Boot application. It accepts GET requests for the needed libraries. Then it downloads the libraries and their dependencies from Maven or npm, and places them in a designated folder. The organizational file checking system will take the files from there, check them, and if they are approved they will be moved into the inner network wrapped as a zip file (Listing 3).

That’s it! You are welcome to use a similar solution in your environment and start enjoying the wealth of open source libraries out there…