In the first article in this series, we installed the Node.js Thin Client package for Ignite and tested an example application. In this article, let's look at a particular scenario where Ignite can really help when working with existing data from another source, such as a Relational Database System.

Often in the industry, there are systems that have great business value. These have to be cared for, maintained, and enhanced. Greenfield developments are rare. Apache Ignite can be used with legacy or heritage systems in an organization to add value and provide new possibilities, such as cluster computing with horizontal scalability, significant in-memory performance benefits, and new applications using machine and deep learning. 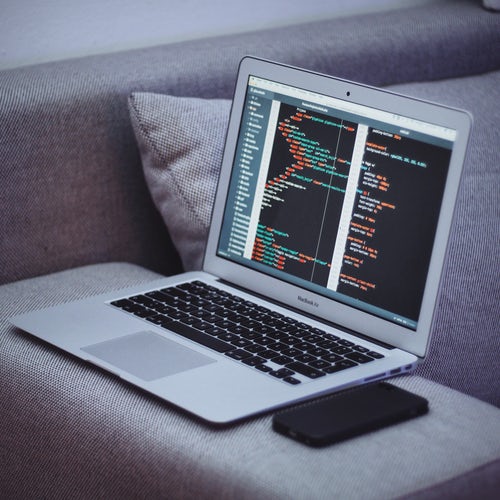 For this article, we'll use MySQL with the World Database already loaded and ready.

The structure of the World Database is three Relational Tables, as follows:

Next, let's ensure that our MySQL Server is up and running and ready to accept connections.

In order to access MySQL Database Schema information, we'll use Web Console. For this article, we'll use the service hosted by GridGain, although Web Console sources can be downloaded, and it can be built locally and run behind a corporate firewall. Please refer to the documentation.

We also need the Web Agent and the option to download. This is available from the Web Console, as shown in Figure 1. 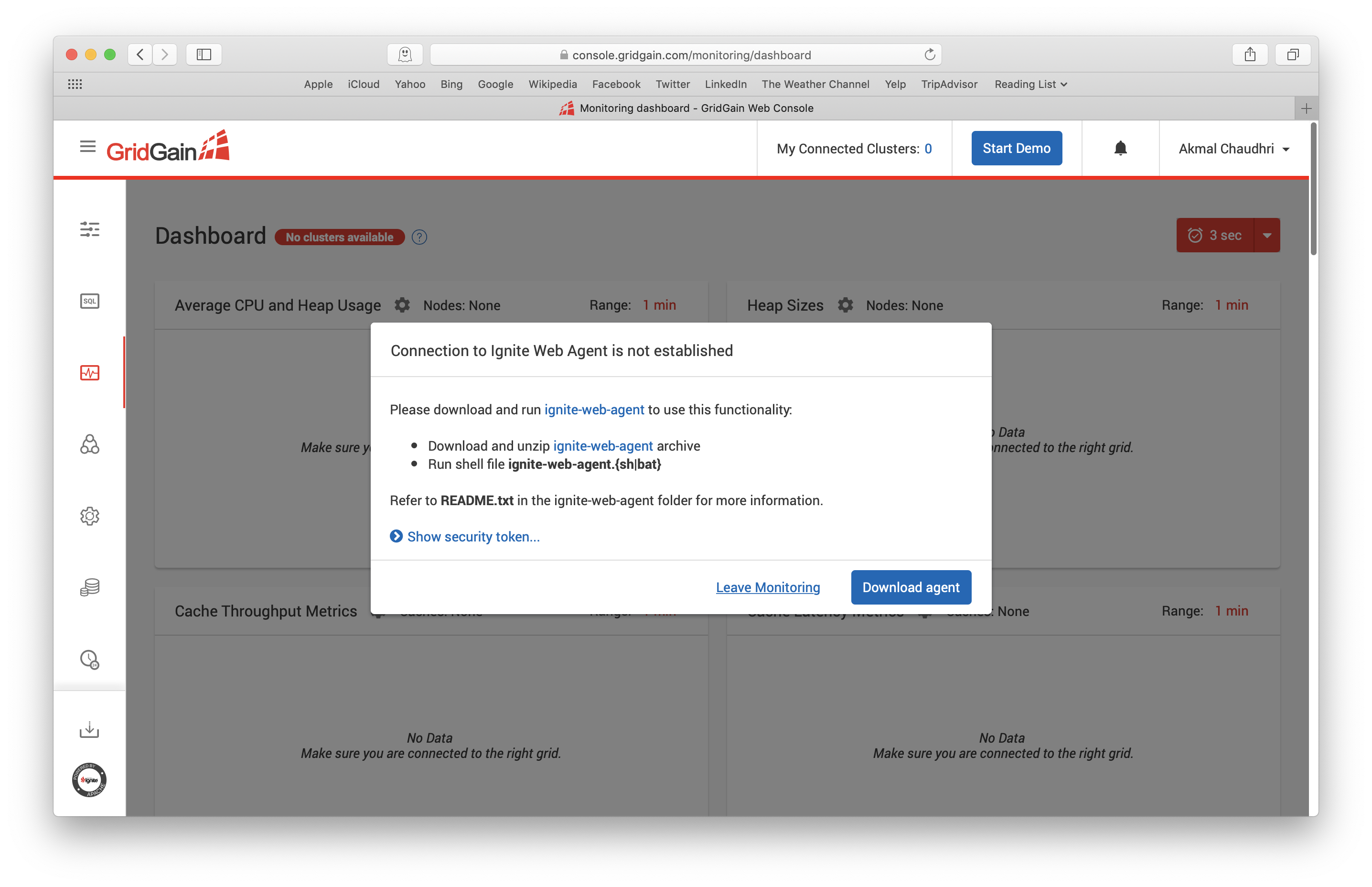 Once the Web Agent zip file has been downloaded, we need to unpack the files, and the directory structure should be similar to Figure 2. 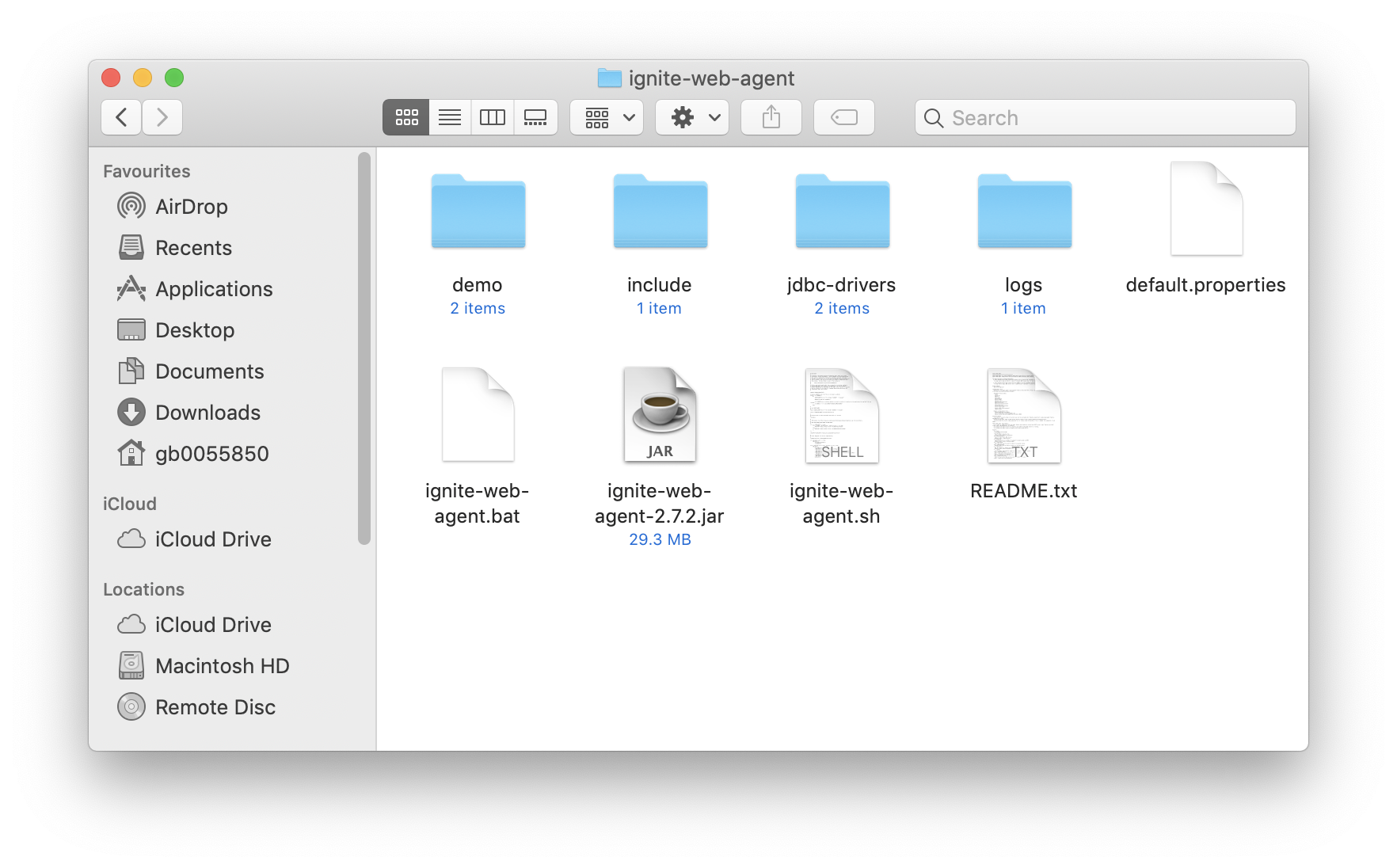 Notice that there is a folder called jdbc-drivers. Since we are going to be working with MySQL, we'll download the MySQL JDBC driver and copy the jar file into this directory as shown in Figure 3. 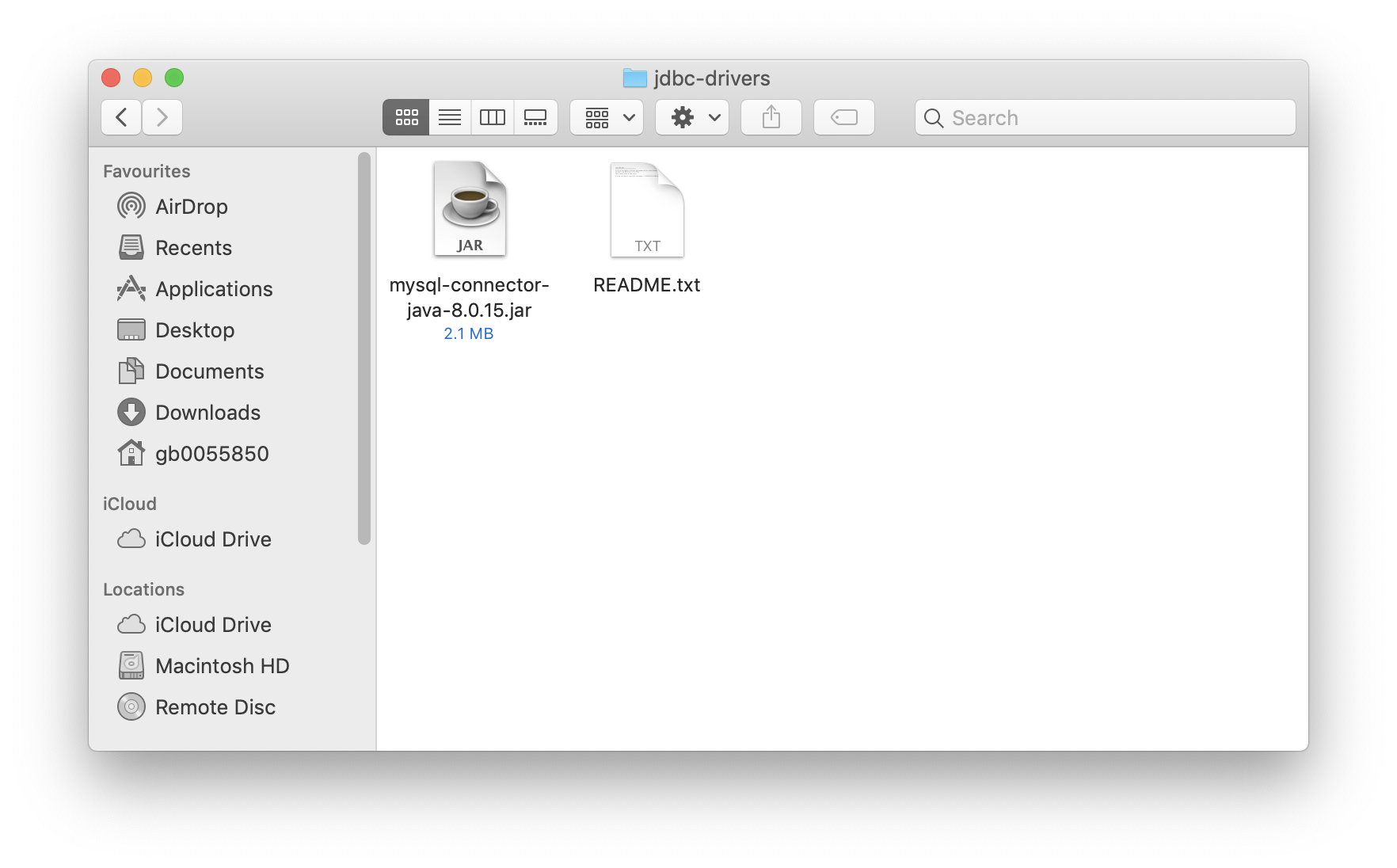 Let's start the Web Agent from a terminal window, as follows: 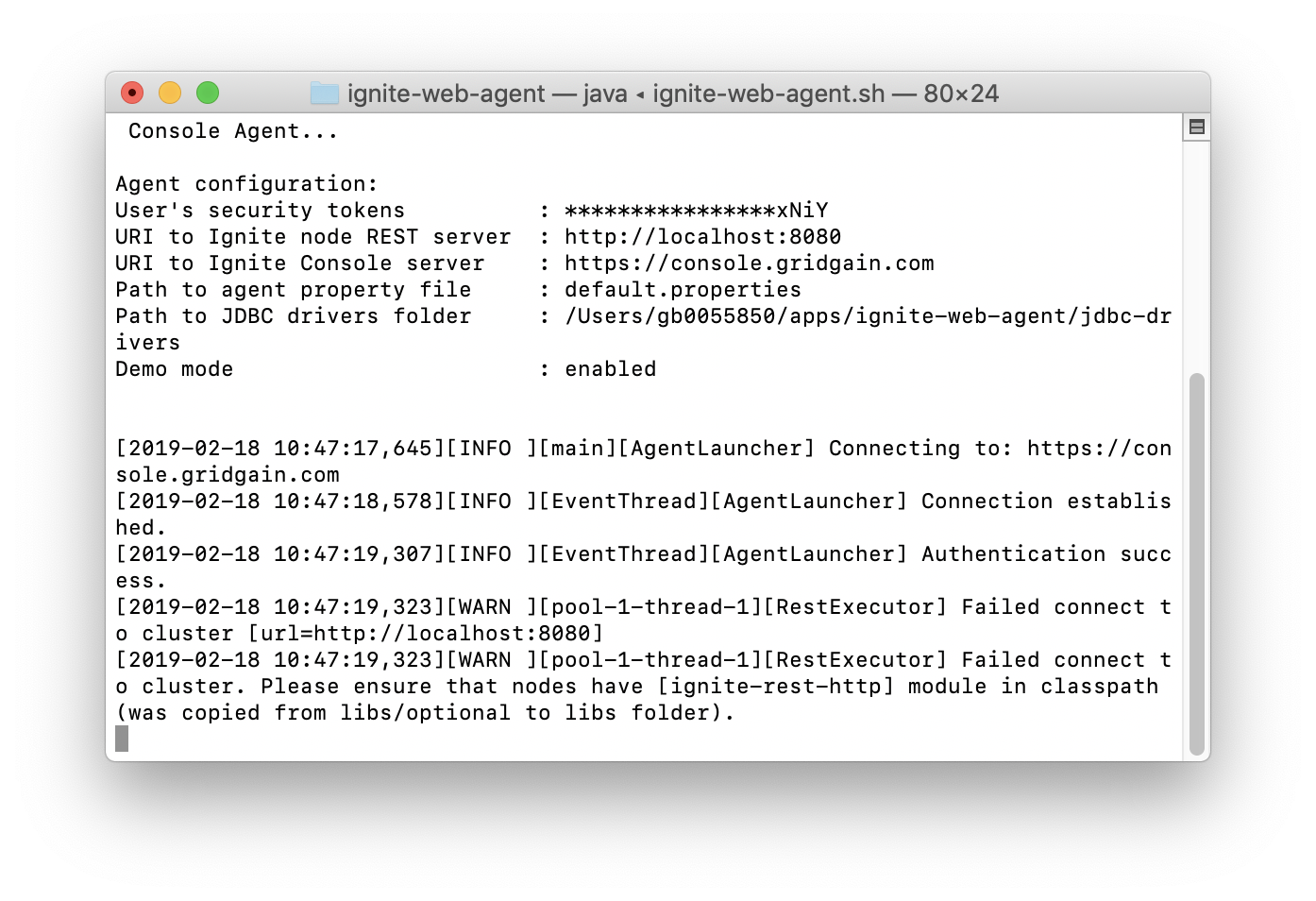 We are now ready to import schema information. From the Configuration page on Web Console, there is an Import from Database button on the top right-hand side, as shown in Figure 5. 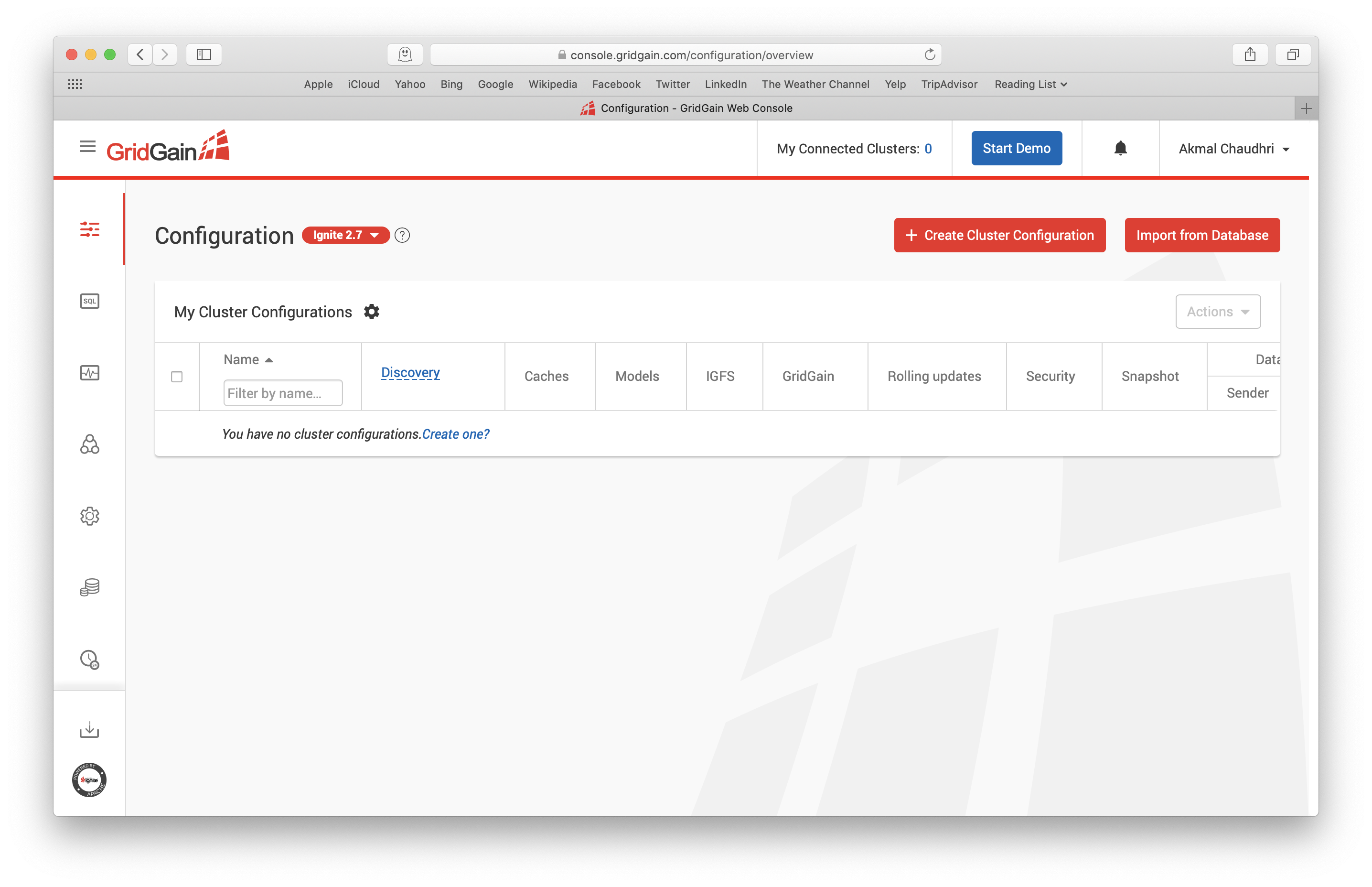 Let's click this button and the output should be similar to Figure 6. 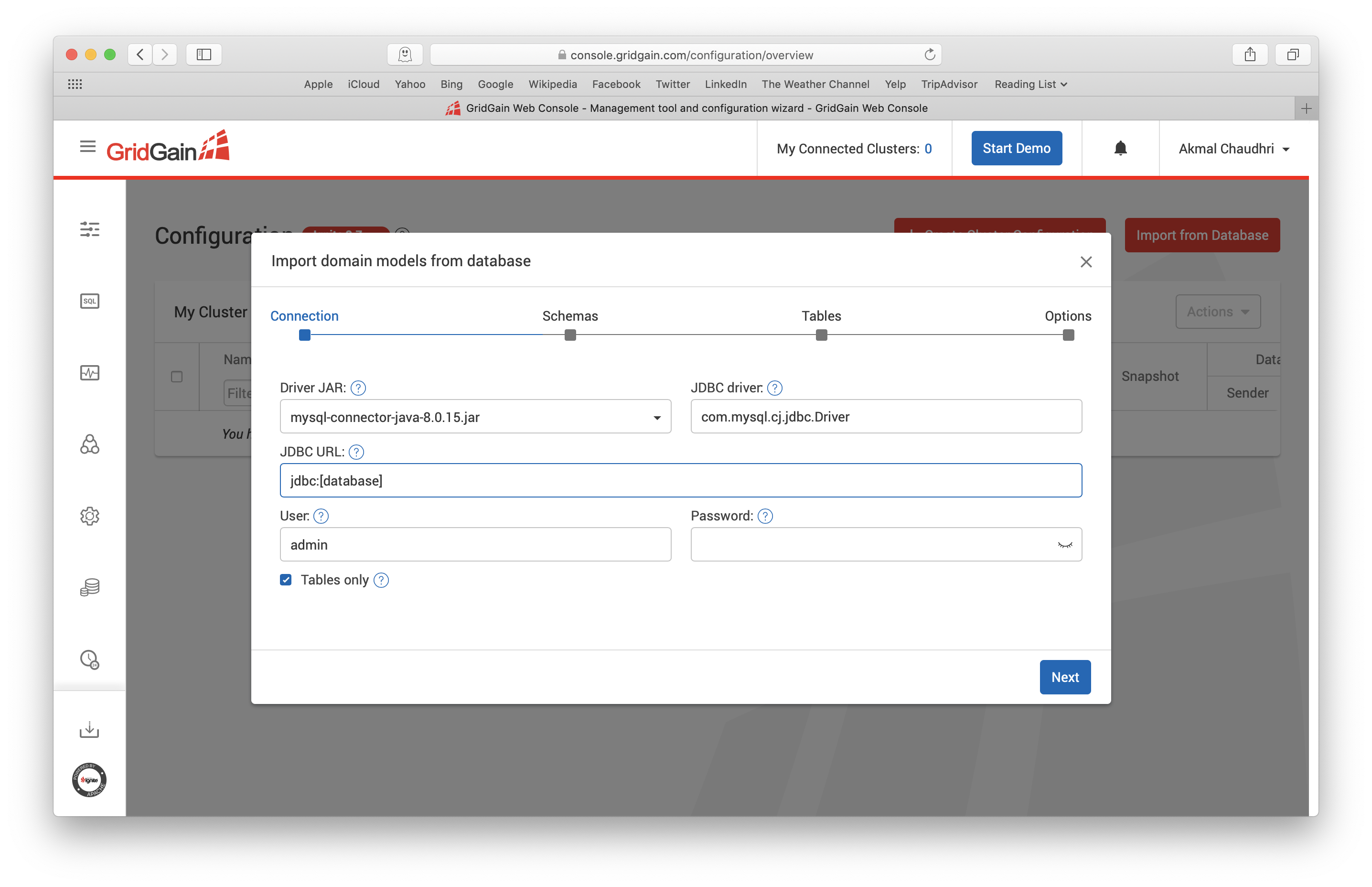 On this screen, we just need to enter the JDBC URL and the User and Password for the MySQL Server. I have entered these details for my environment, as shown in Figure 7. 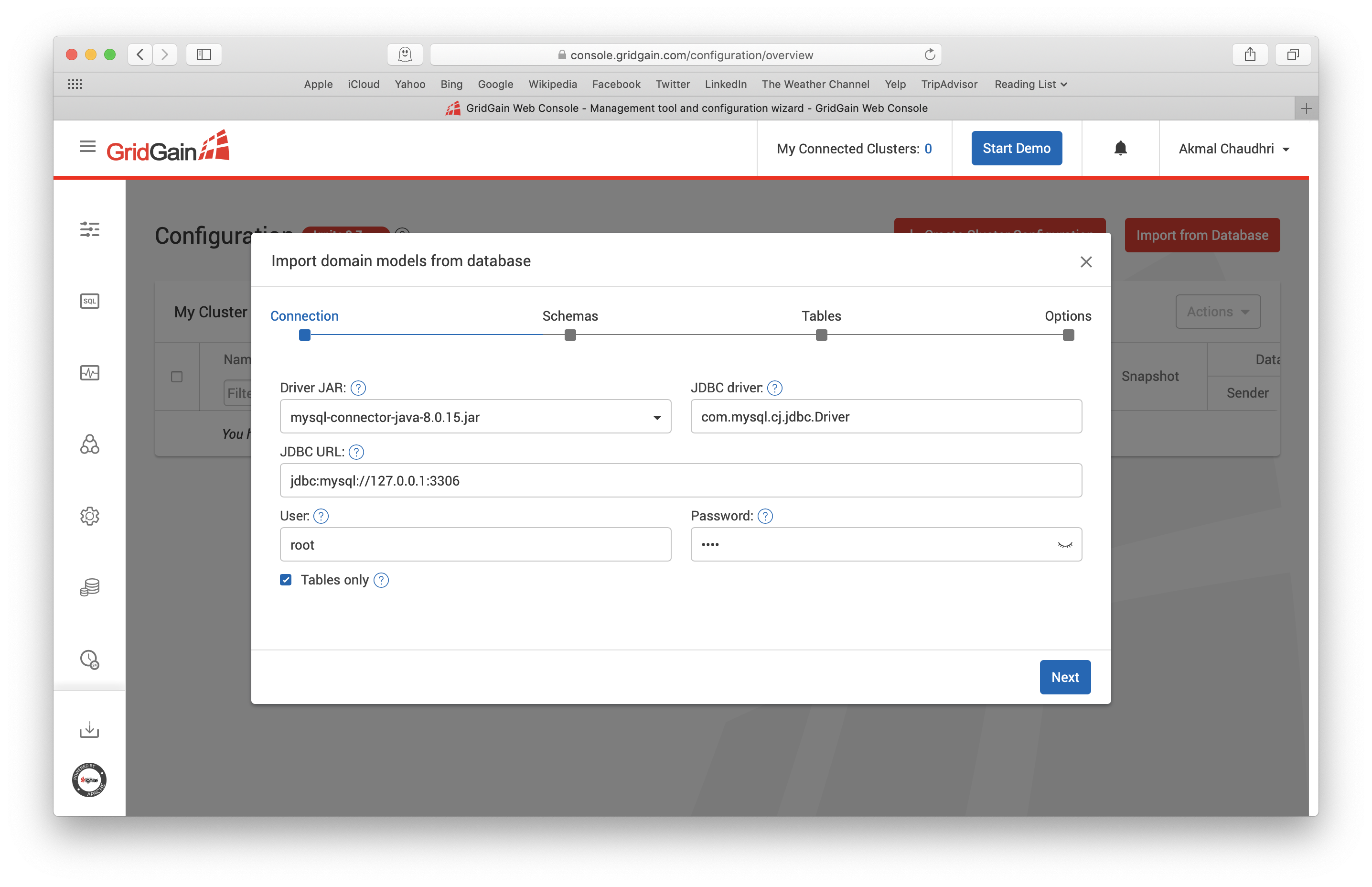 When we are ready, we can click Next. We may now be presented with various database schemas and will de-select all but the World Schema, as shown in Figure 8. 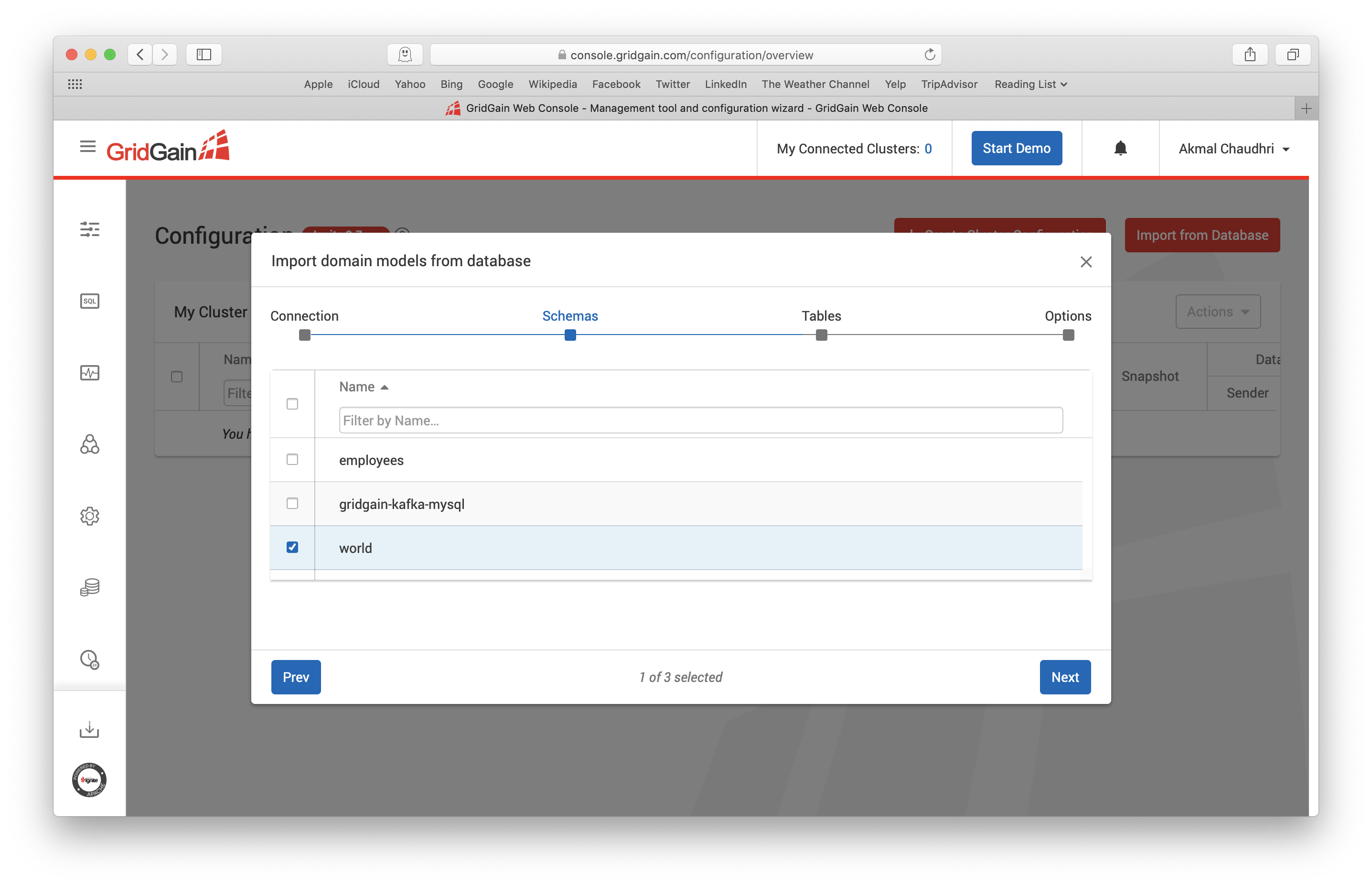 When we are ready, we can click Next. We can now see the three tables, as shown in Figure 9. 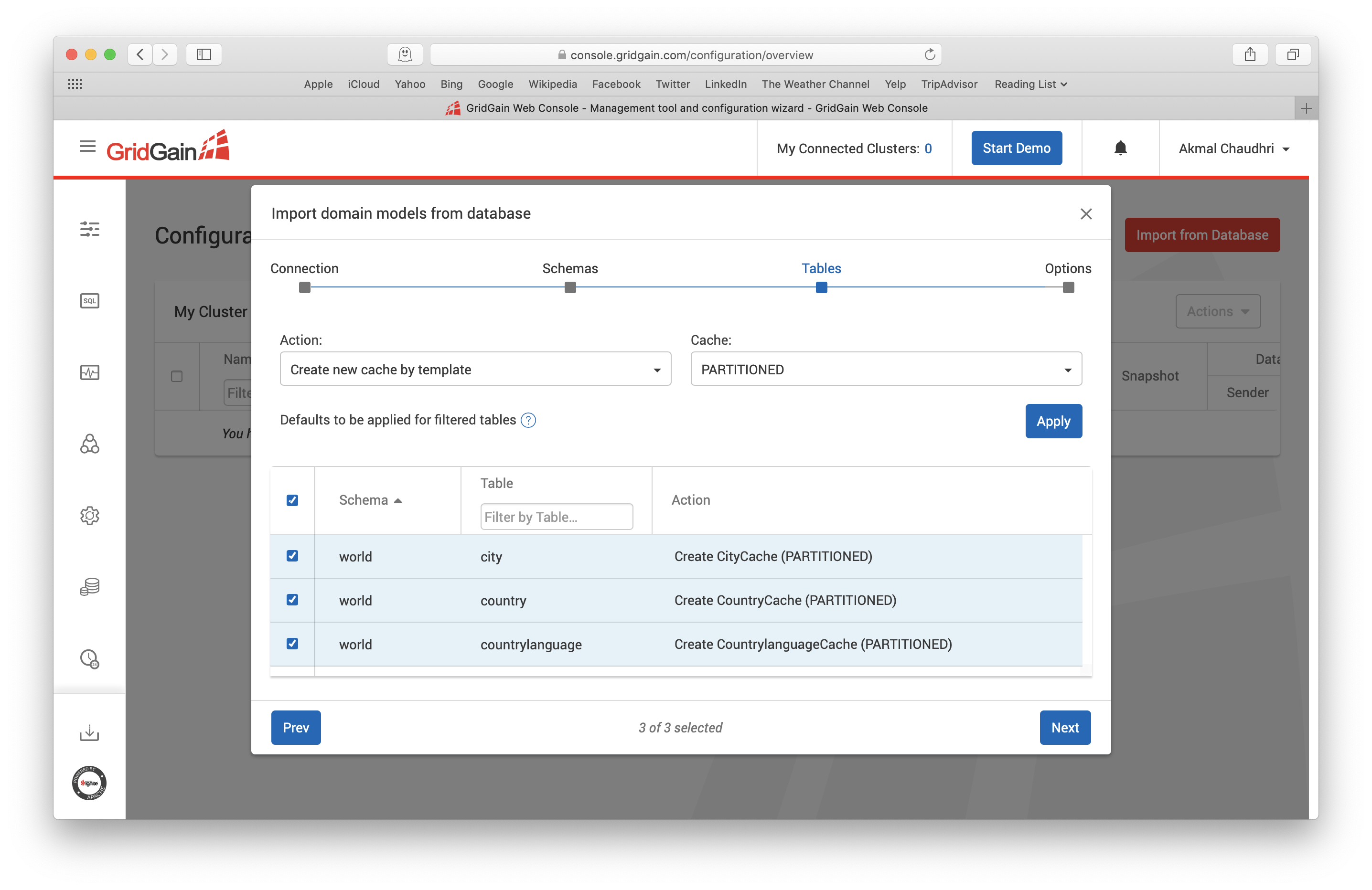 For this article, the defaults on this page are fine, and when we are ready, we can click Next. This now brings us to the screen shown in Figure 10. 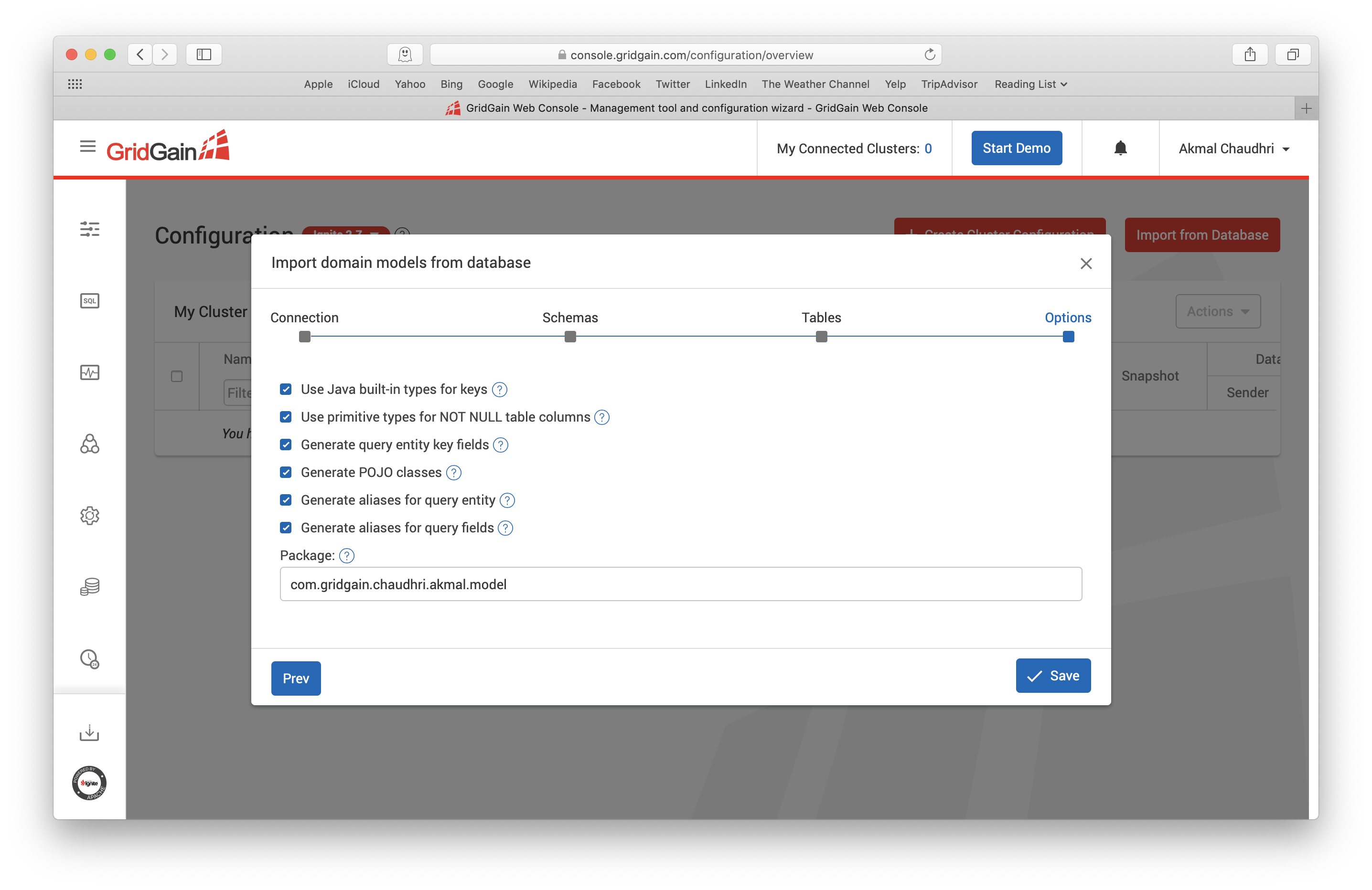 For this article, these options will be fine, and we can click Save.

Next, on the Configuration page, we can see a new configuration listed, called ImportedCluster, as shown in Figure 11. 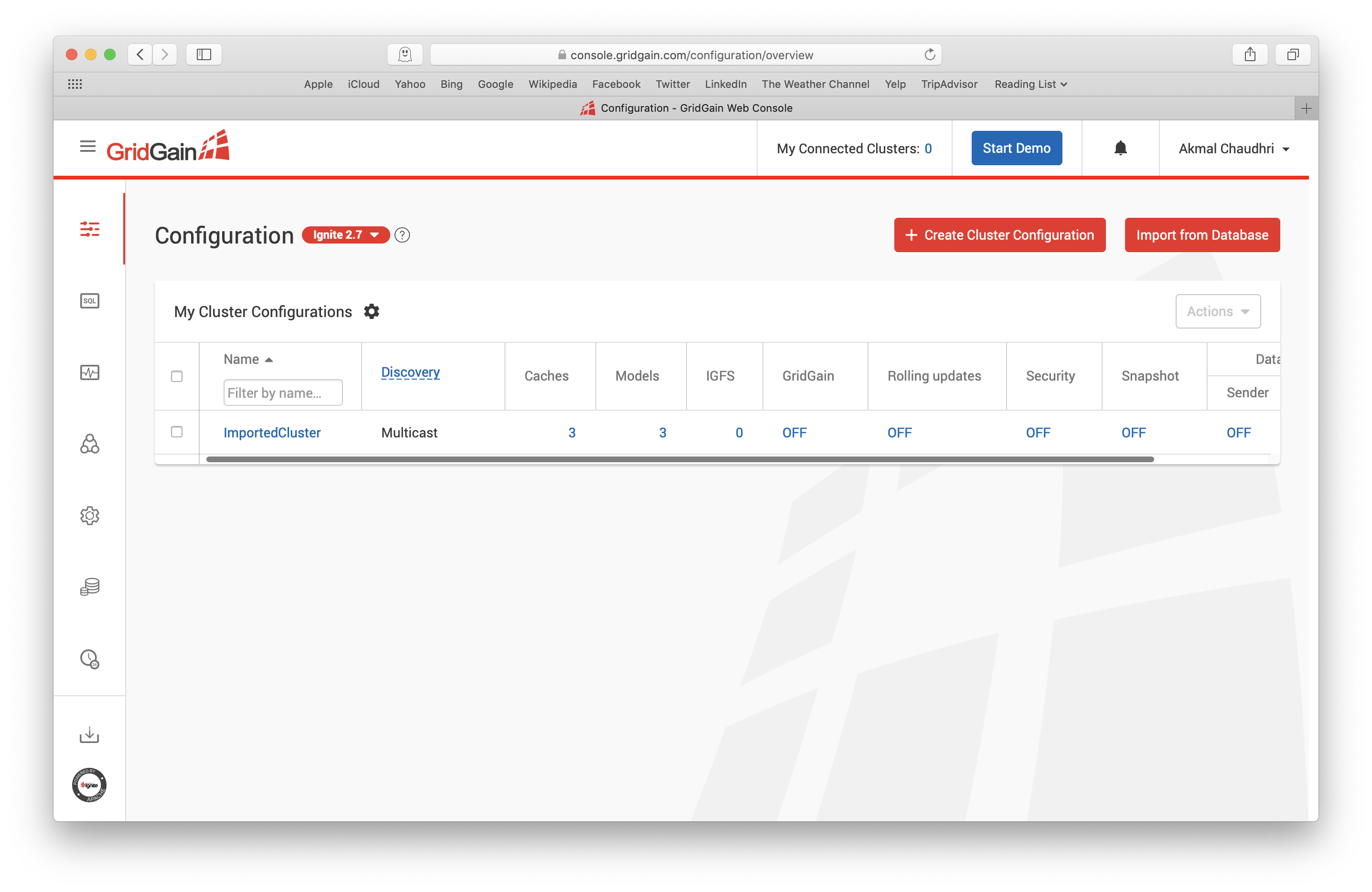 We'll now modify this configuration to suit our needs.

If we click on the ImportedCluster name, we are presented with the screen shown in Figure 12. 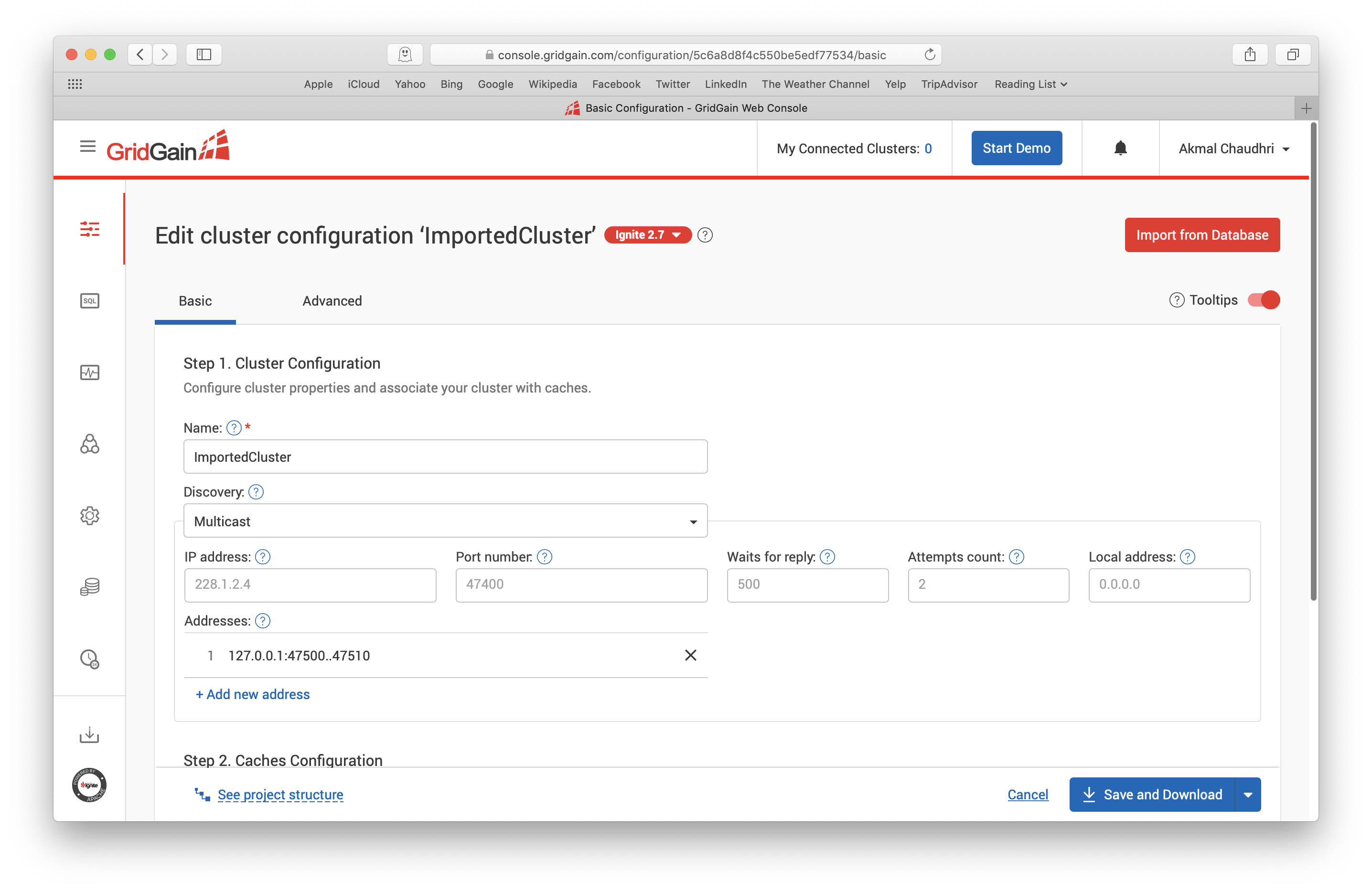 On this screen, we have two tabs: Basic and Advanced.

On the Basic tab, we can change the cluster configuration name (Step 1), and if we scroll-down, the names of the Ignite Storage (Step 2), as well as various other parameters. For our example, we'll keep the defaults on this page.

On the Advanced tab, there are additional sub-tabs — Cluster, SQL Scheme, Caches, IGFS, and GridGain, as shown in Figure 13. Here, we have the opportunity to undertake a great deal of fine tuning, if required. 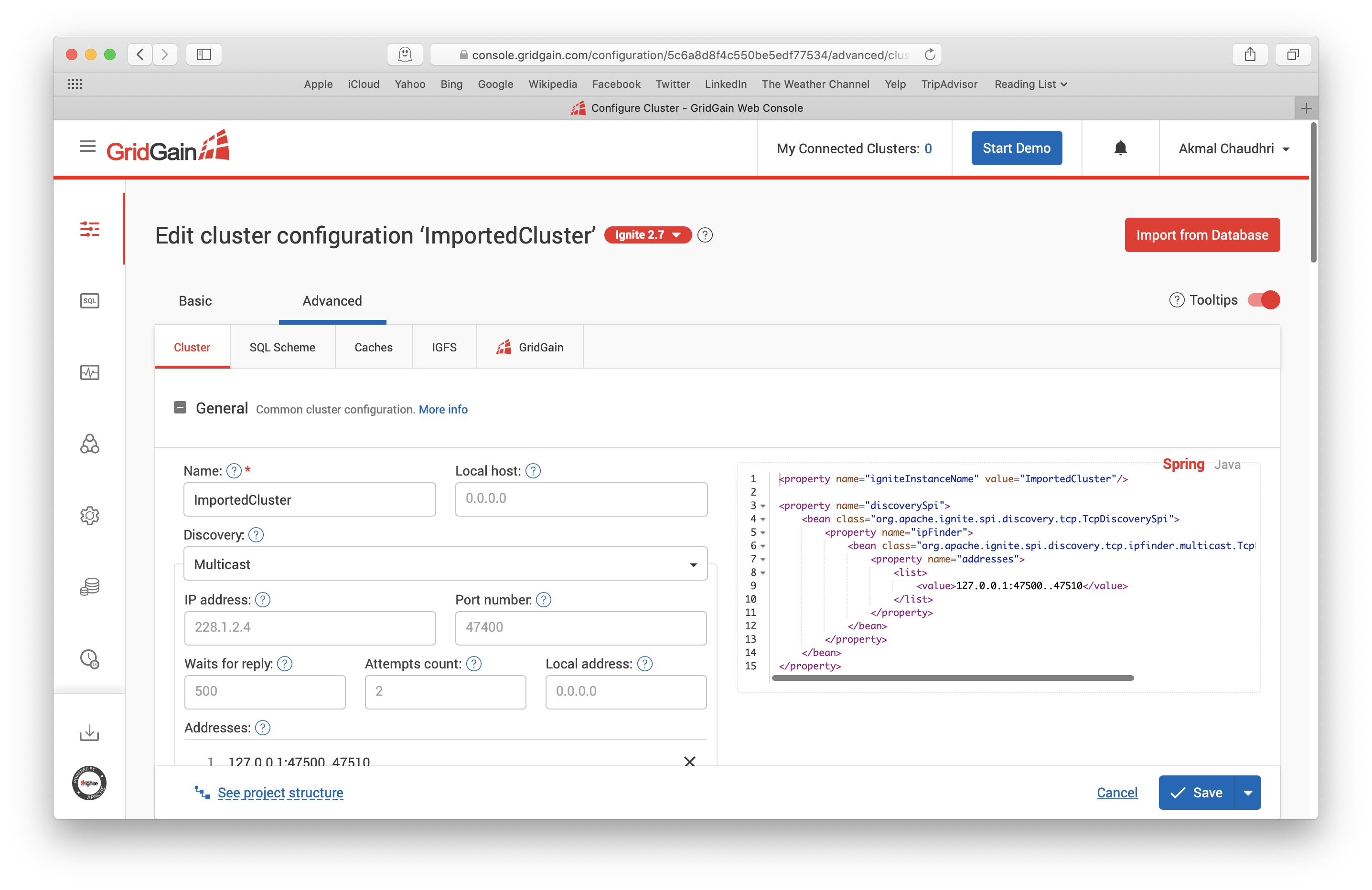 Let's select the SQL Scheme tab. With the first row selected for City, as shown in Figure 14, let's scroll-down and expand the section Domain model for SQL query. 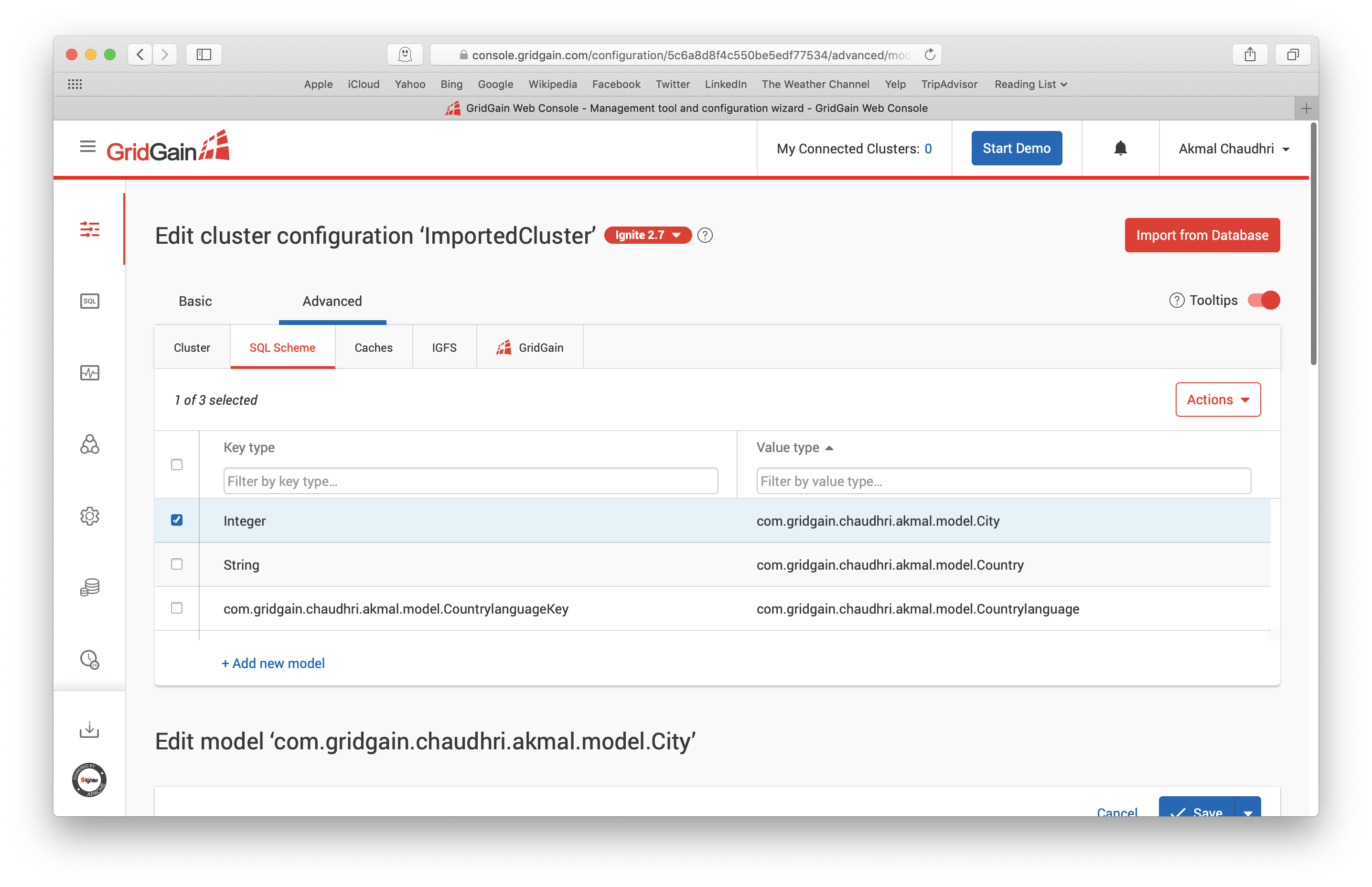 We have an indexes sub-section with the value CountryCode, and if we click on this, we can modify the value as shown in Figure 15. 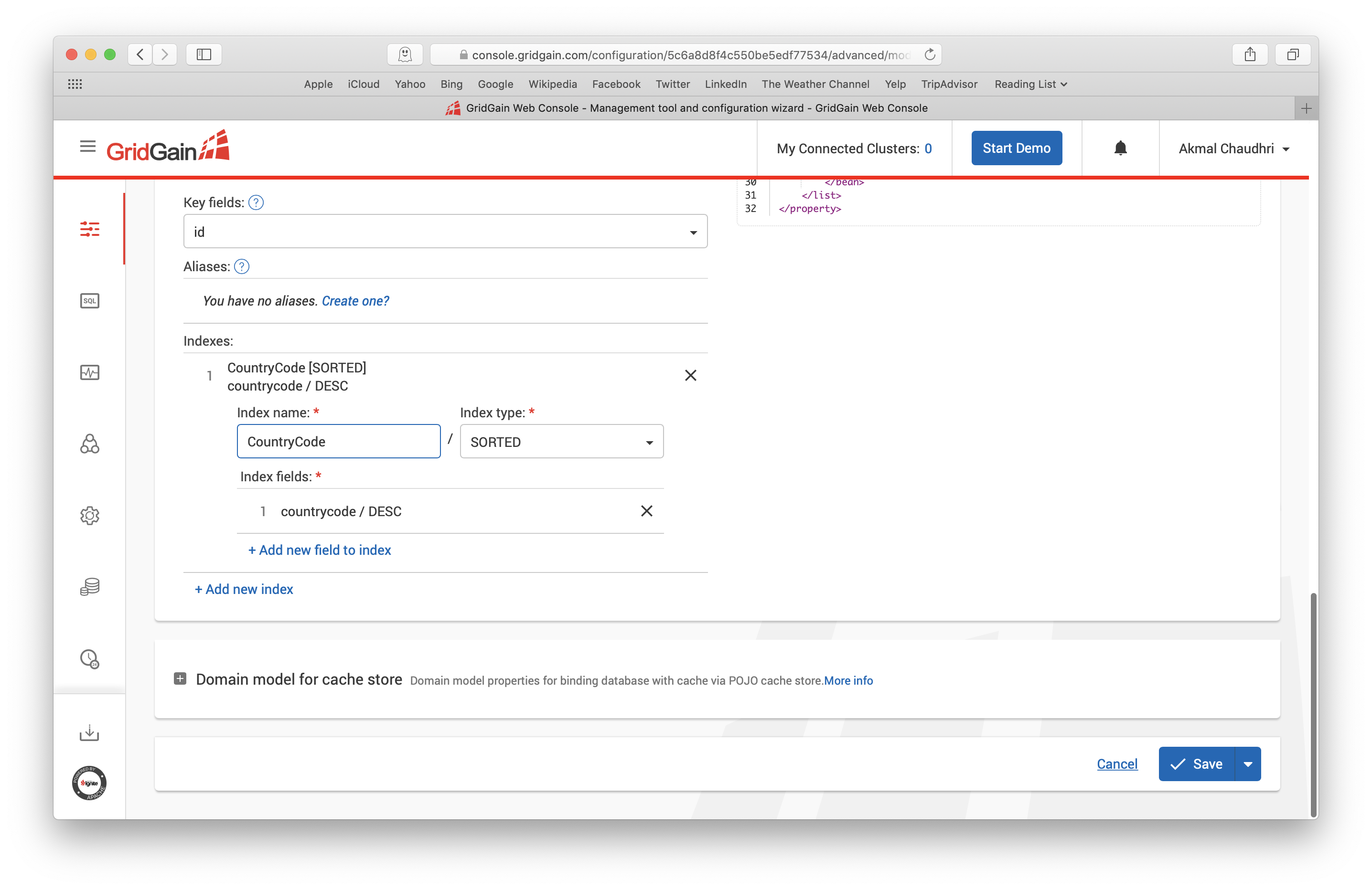 Let's now select the Caches tab. With the first row selected for CityCache, as shown in Figure 16, let's scroll down and expand the section Queries & Indexing. 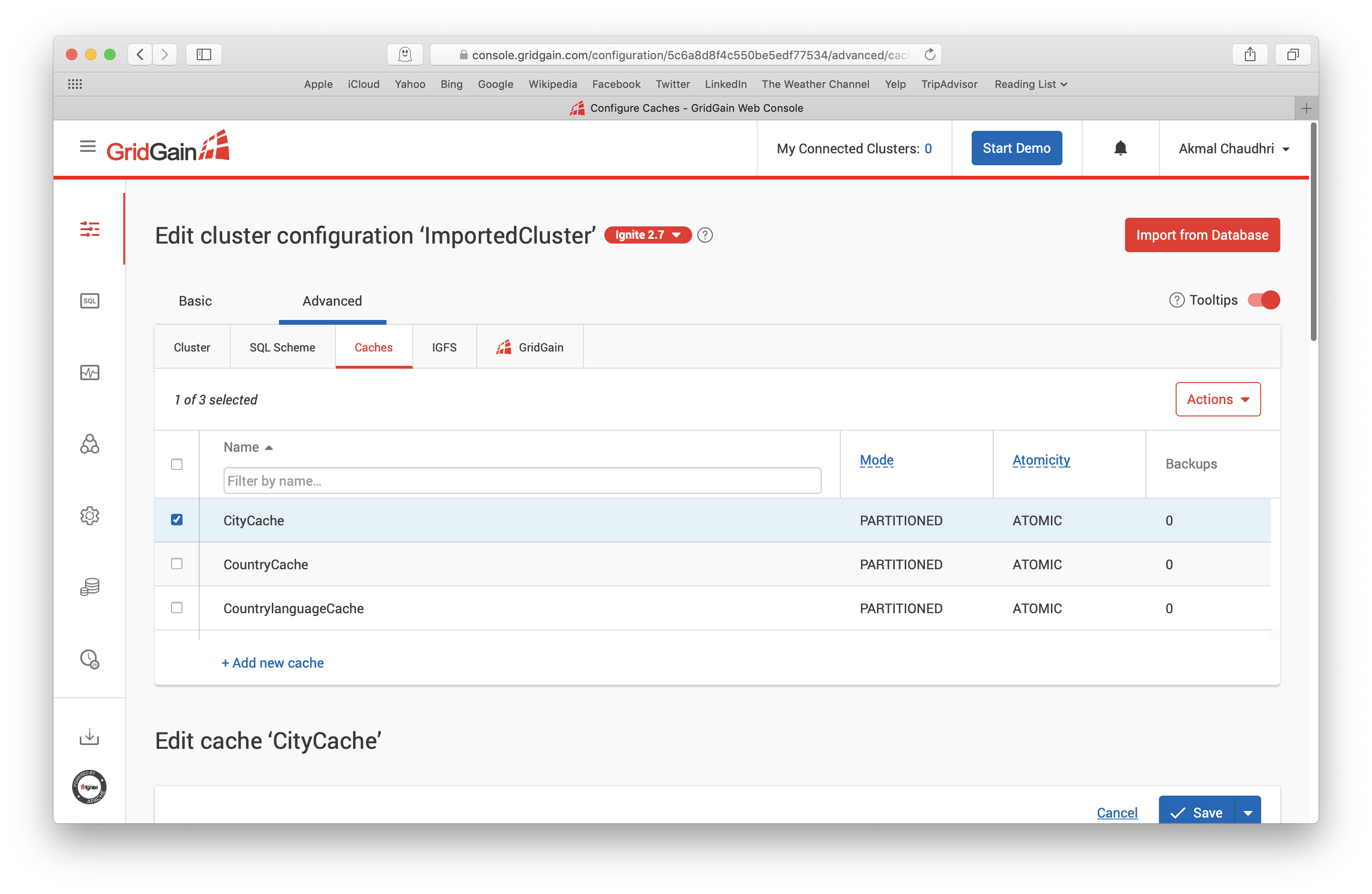 In the Queries & Indexing section, we have a field called SQL schema name that is currently empty. Let's enter the value PUBLIC into this and save our changes. We'll repeat this process for CountryCache and CountrylanguageCache.

Finally, let's return to the Configuration page, select ImportedCluster, and download the project using the Actions drop-down, as shown in Figure 17. 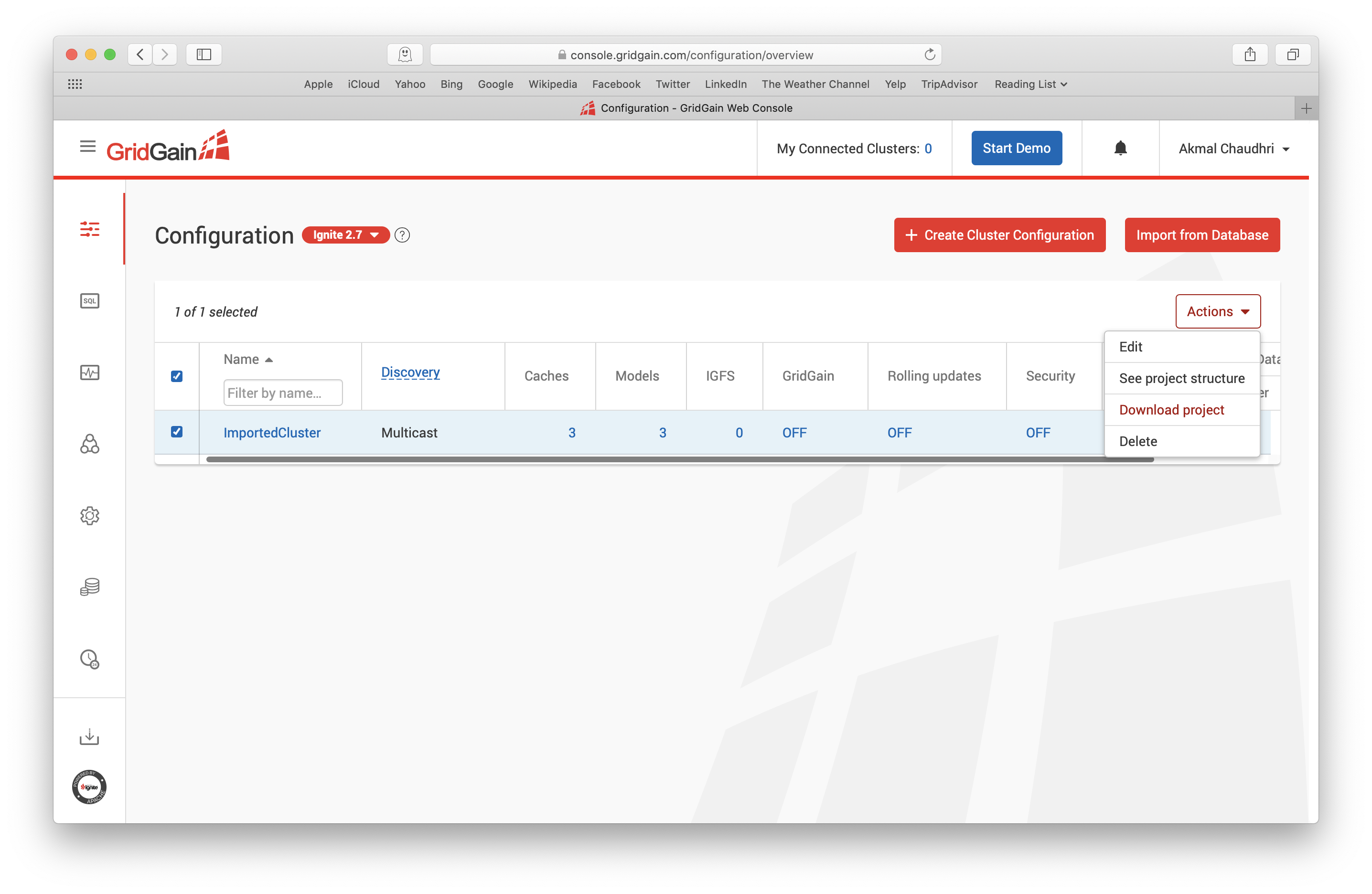 A file called ImportedCluster-project.zip will be saved. We'll unpack this file and create a new project in an IDE by reading-in the pom.xml file, as shown in Figure 18. 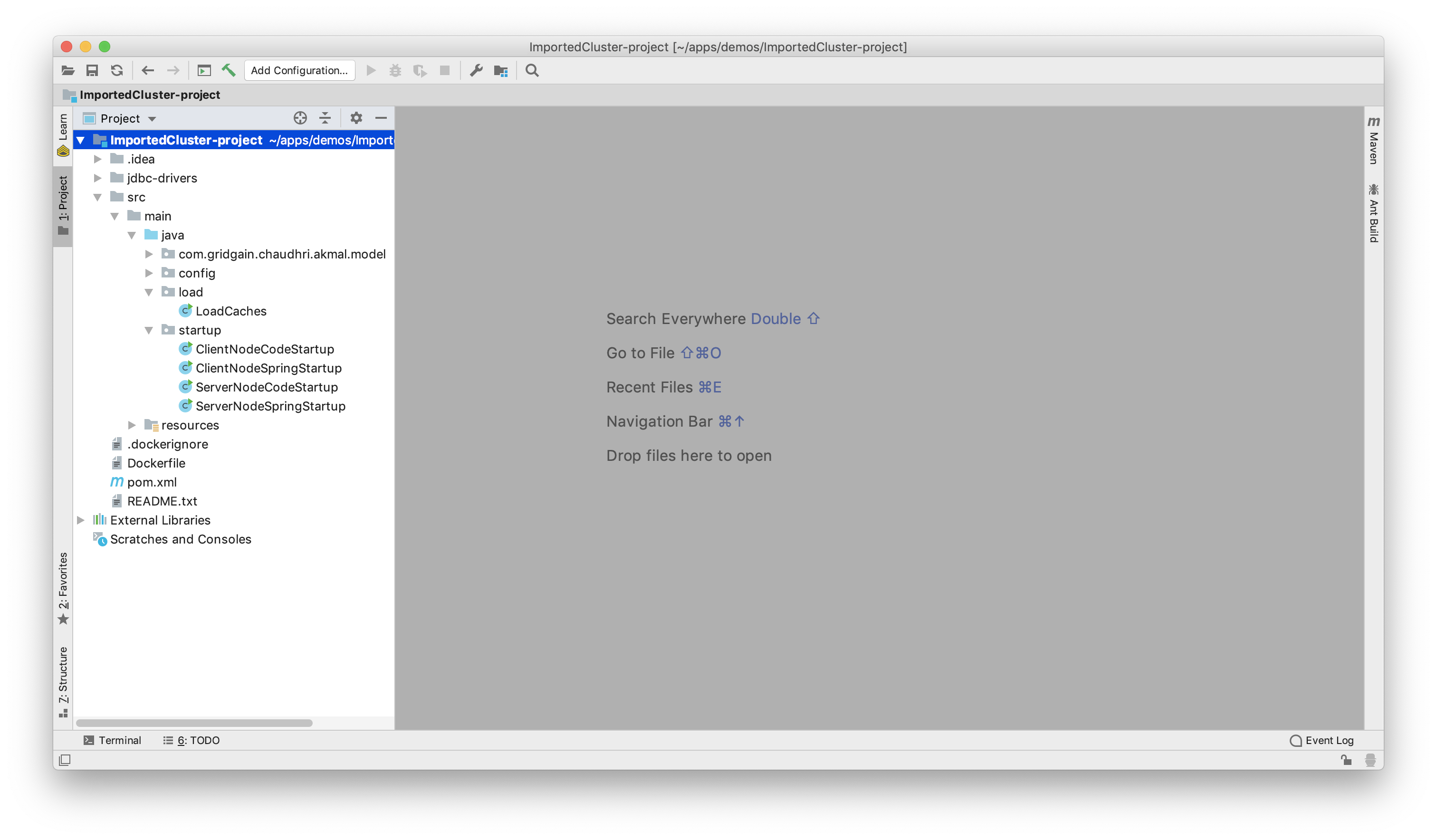 In the pom.xml file, under the dependencies, we should check that there is a dependency for mysql-connector-java. If this is missing, we can add this, as follows:

In our project, under resources, there is a file called secret.properties, as shown in Figure 19. 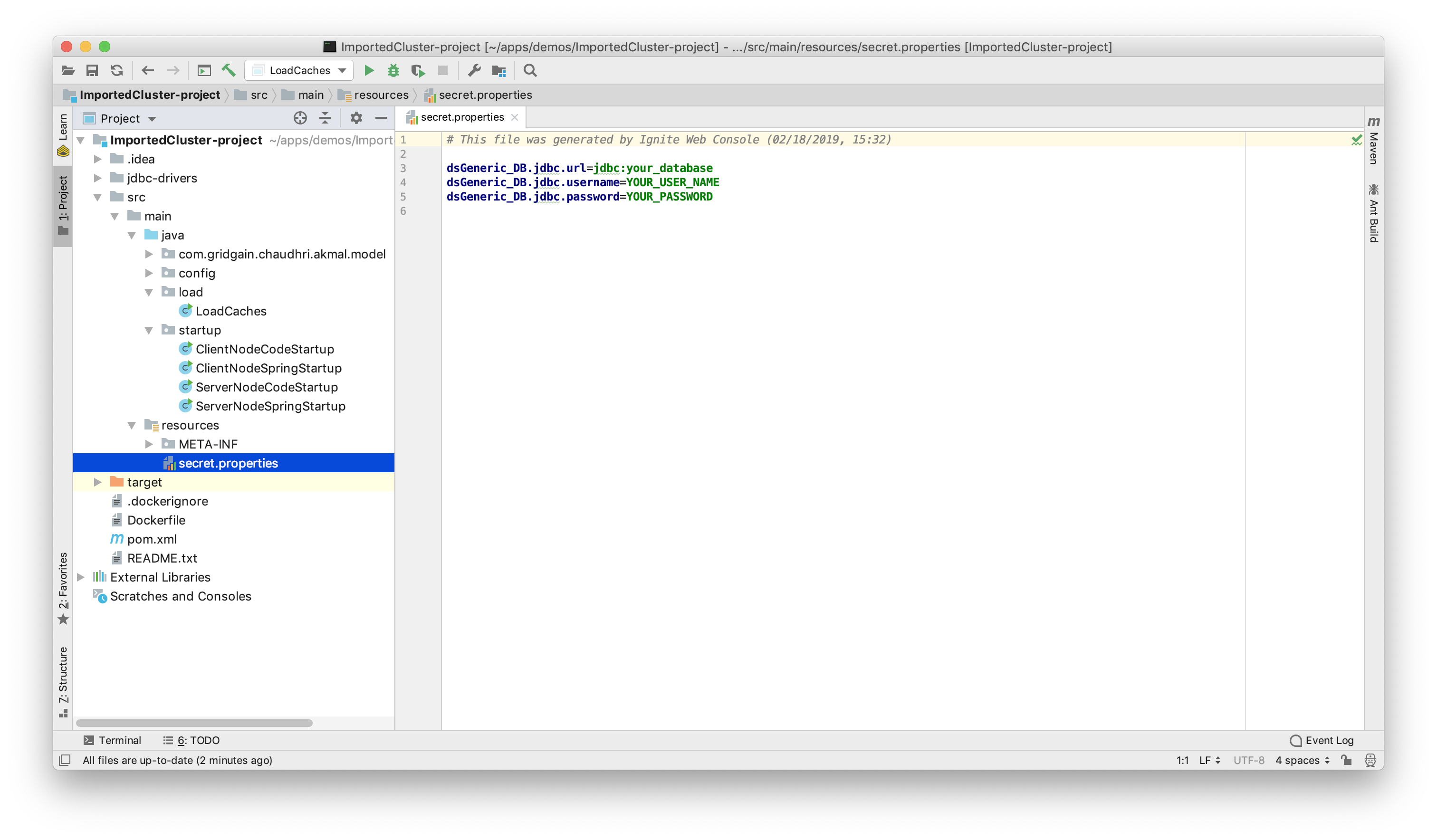 We need to fill-in the values for the JDBC URL, Username, and Password that we used earlier and save the changes.

Once we have rebuilt the project, we can start an Ignite server node, as shown in Figure 20. 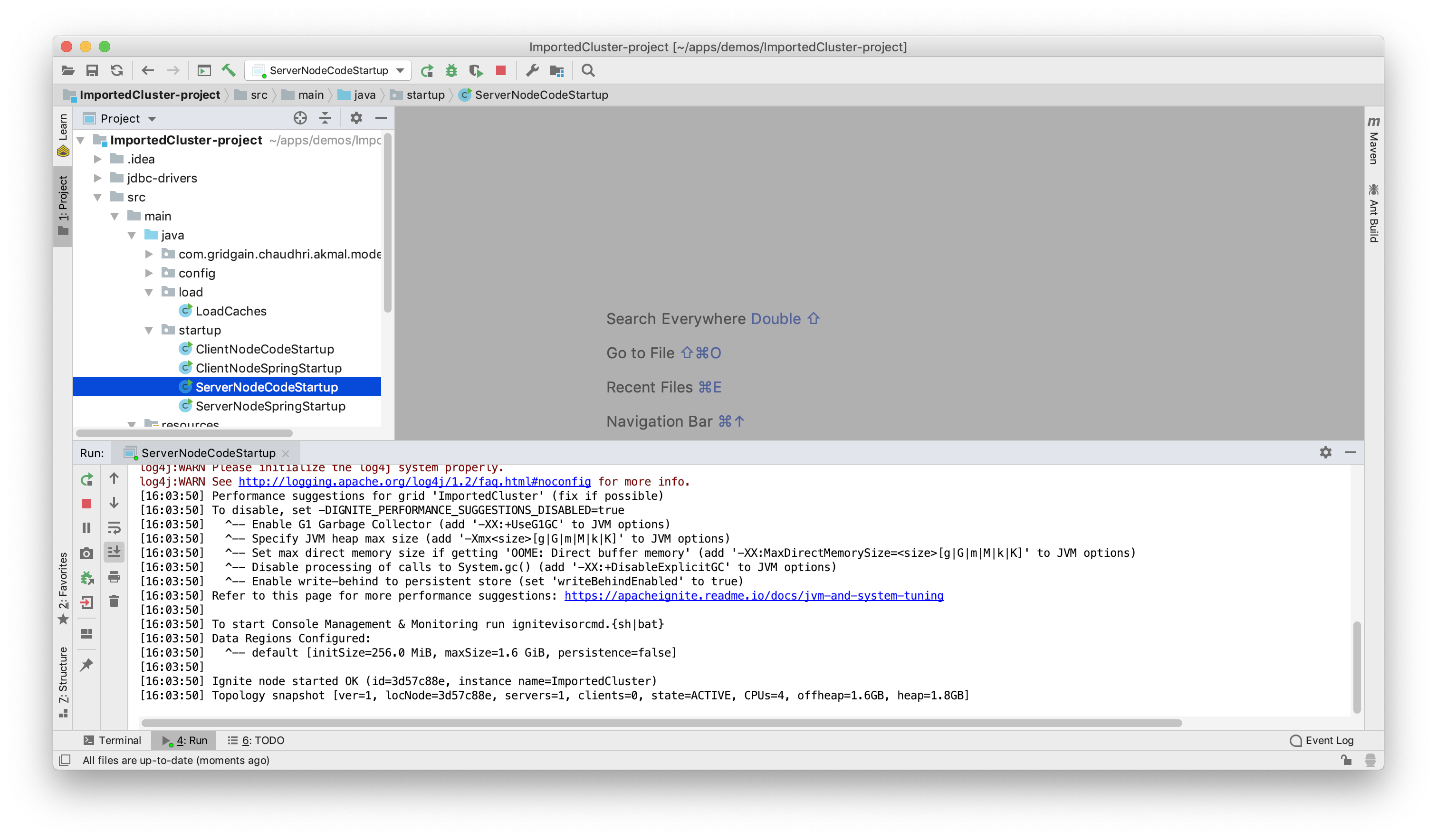 Next, we'll run LoadCaches to populate Ignite Storage from the MySQL Server, as shown in Figure 21. 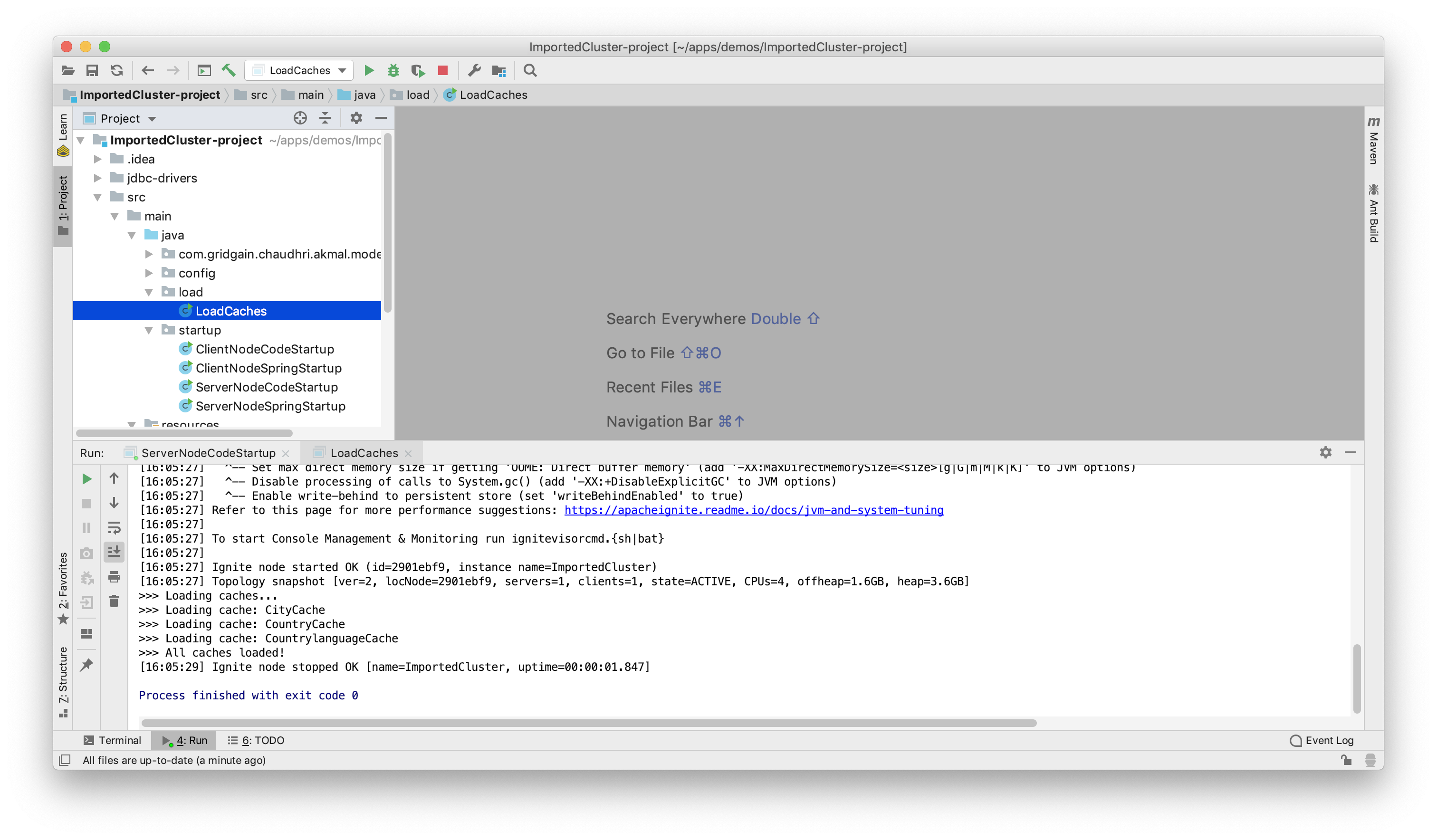 Using Web Console, if we navigate to Monitoring > Dashboard > Caches, we can see that Ignite Storage has been created and the data successfully loaded, as shown in Figure 22. 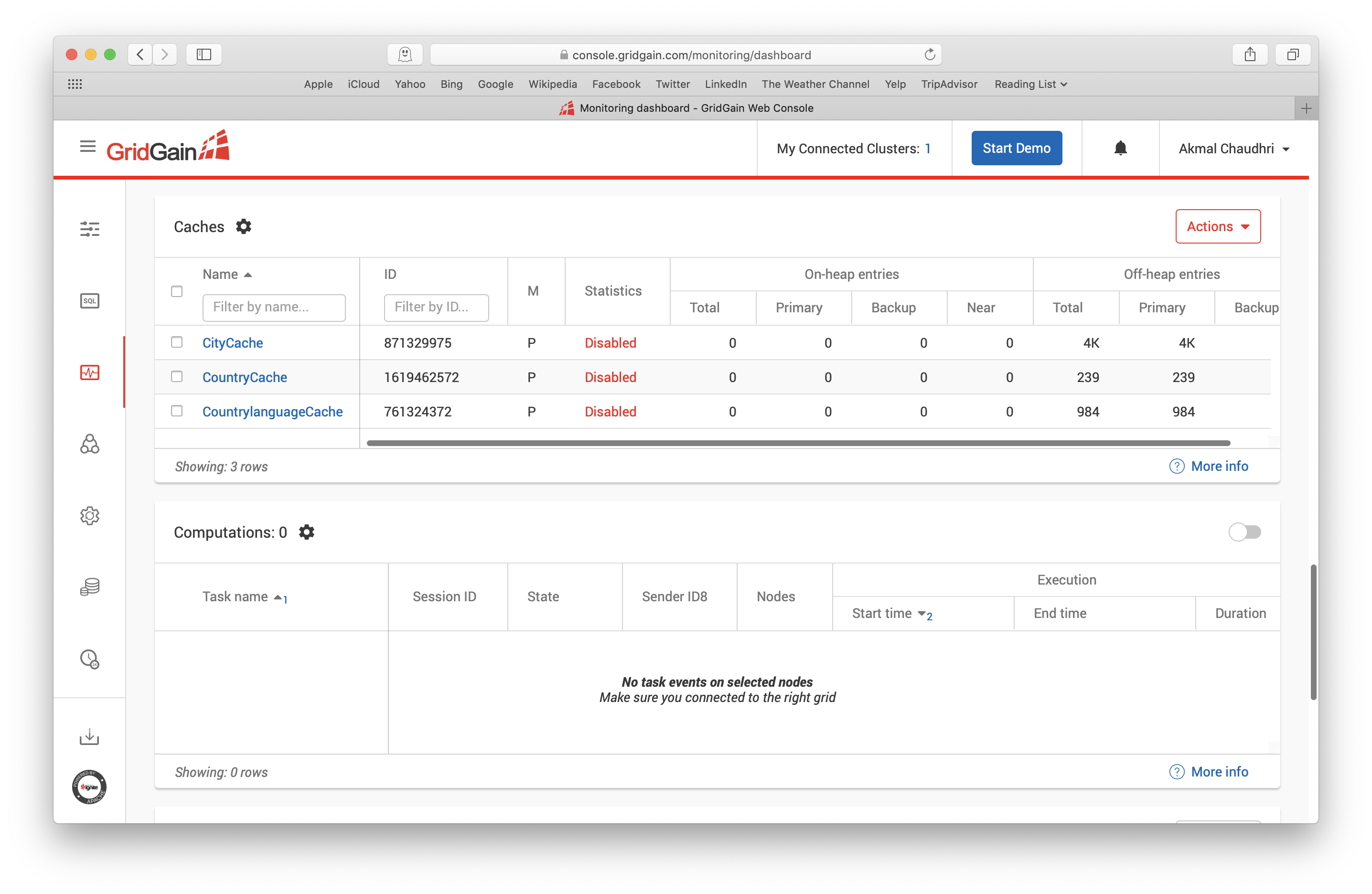 Ignite is now successfully running with storage created and loaded with data from a MySQL Server. So, we could now connect to Ignite with any number of different interfaces. However, let's use the Node.js Thin Client.

The output for Q1 is shown in Figure 23. 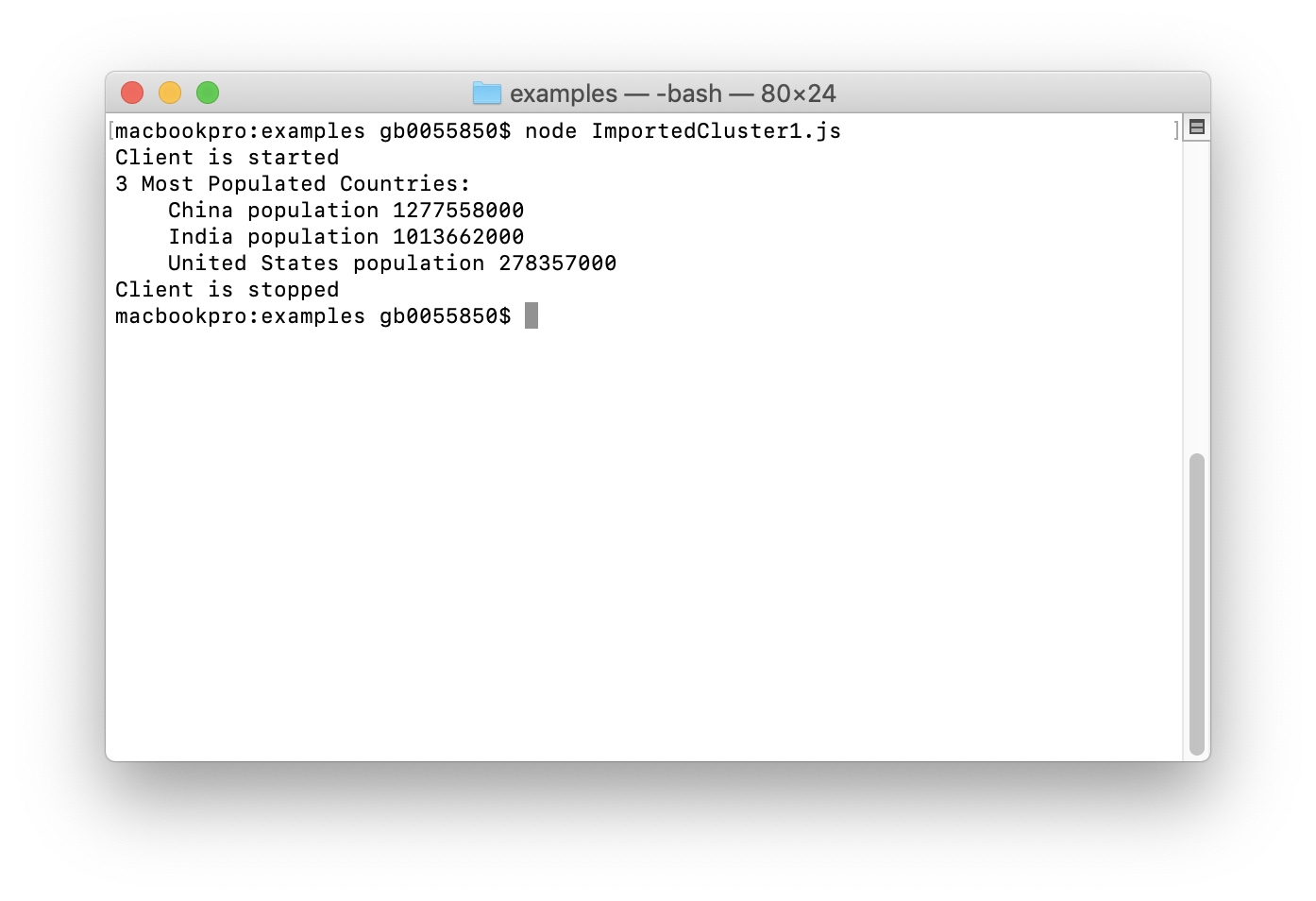 Q2 is a little more complex than Q1 and contains a join across two tables. The output for Q2 is shown in Figure 24. 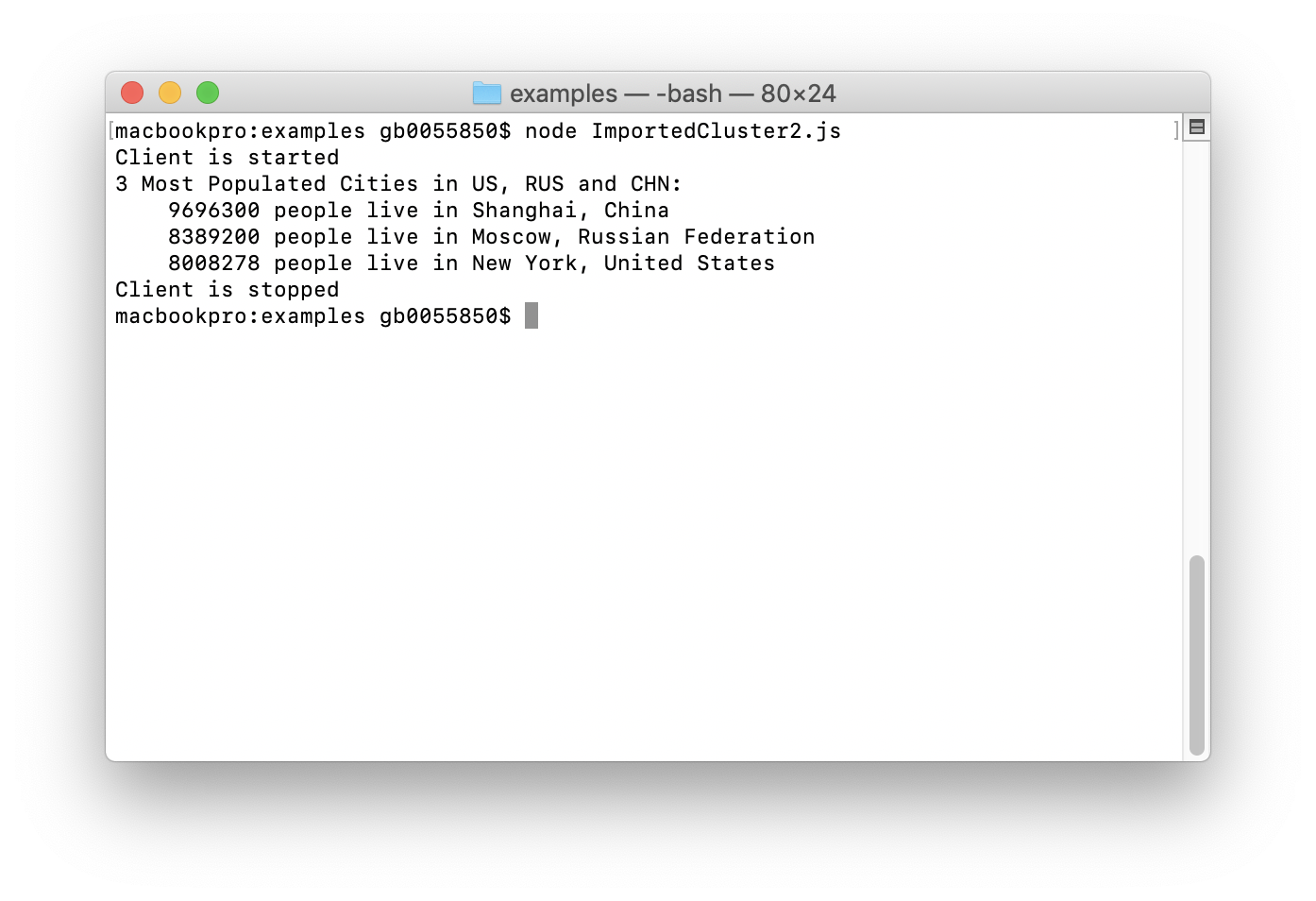 Q3 performs an update operation. After Q3 is run, Ignite's cache is updated and the update is also propagated to the MySQL Server, keeping the two in sync. We can check this by using DBeaver. So, first, we'll locate the row in the Country table where the value is United States, as shown in Figure 25. 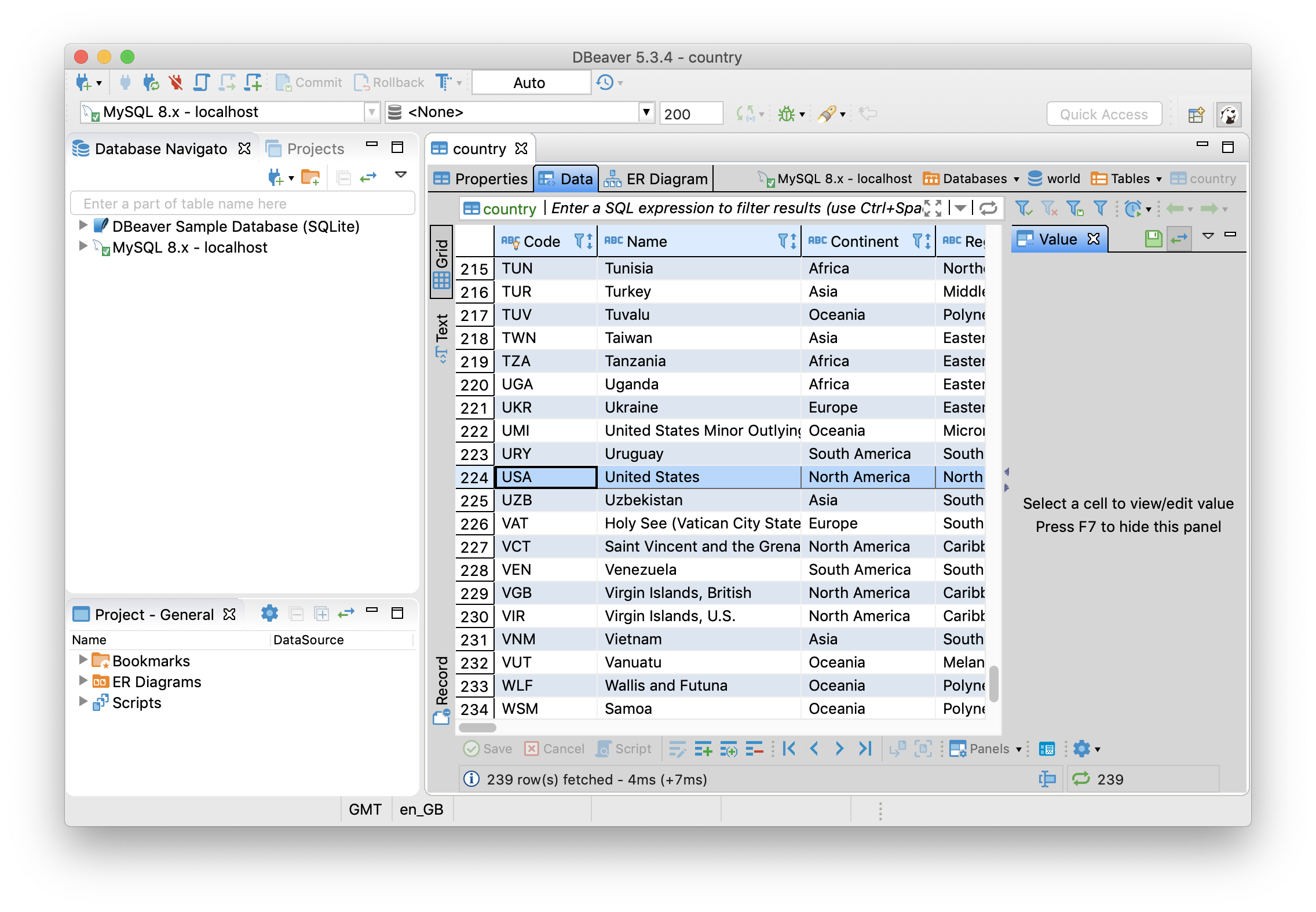 After running Q3 from the terminal, if we refresh DBeaver, we can see that the Name field has been changed to USA, as shown in Figure 26. 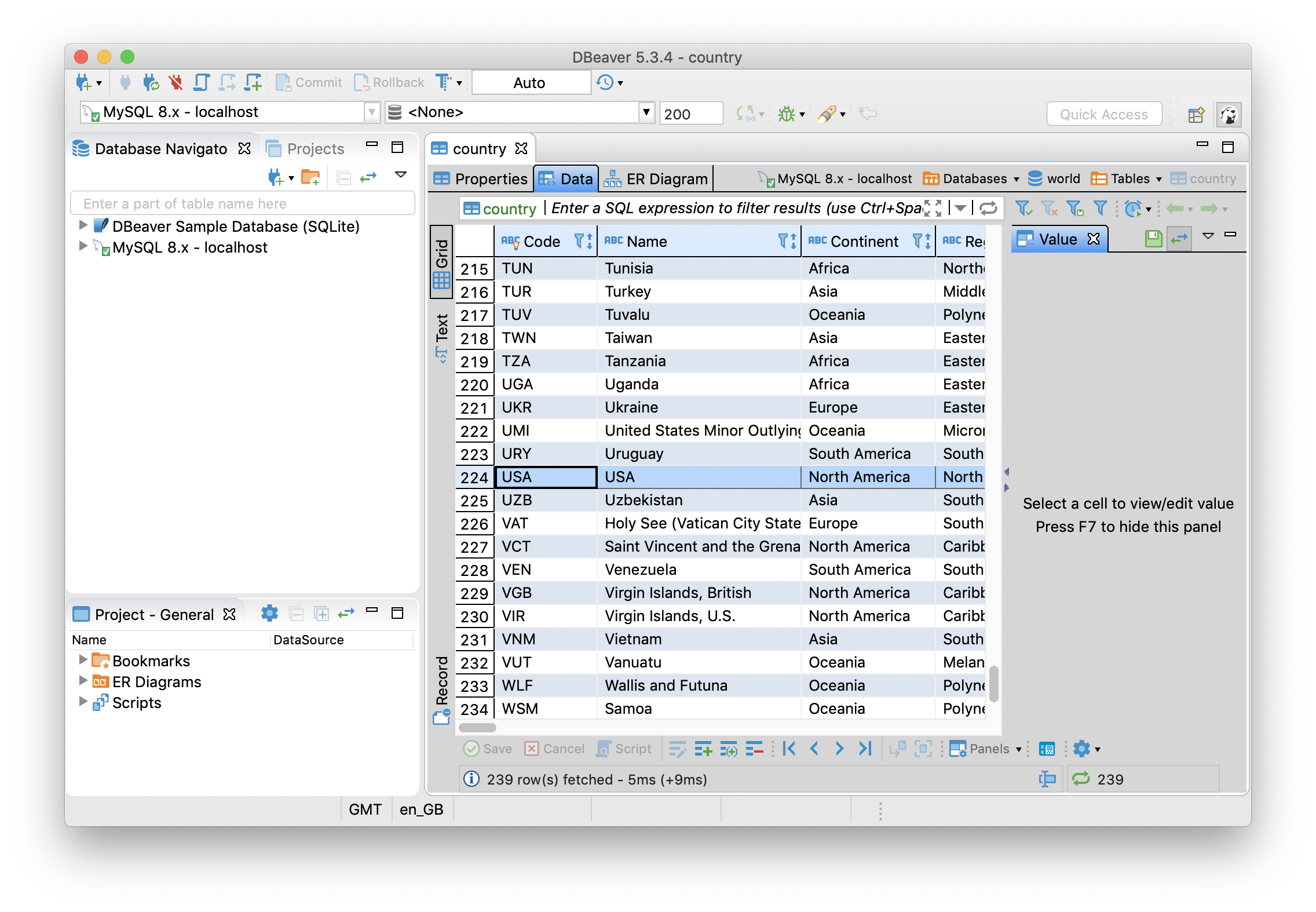 Q4 enables us to restore the original name, and we can verify this by running the query and refreshing DBeaver, as shown in Figure 27. 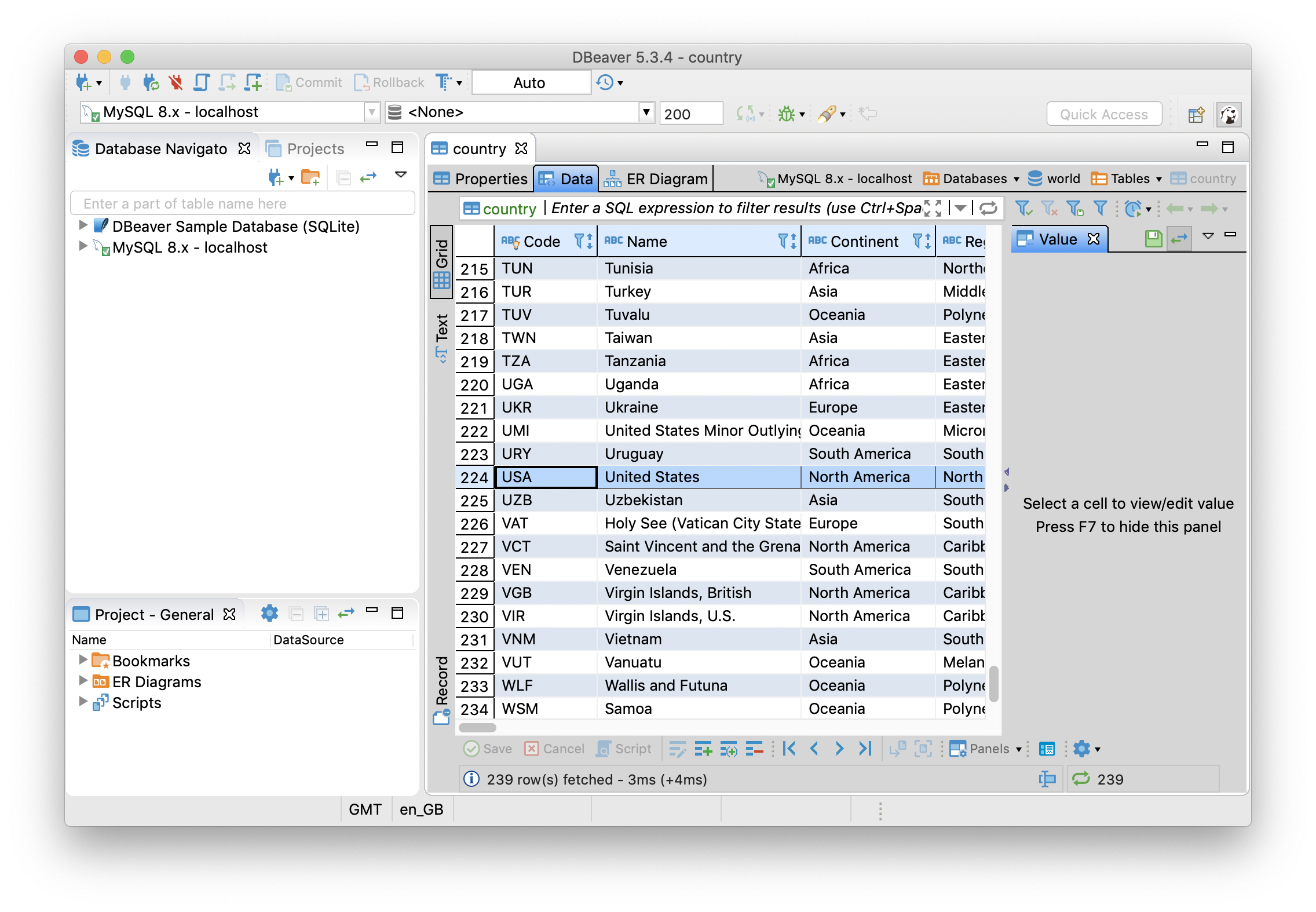 Test the Node.js Thin Client further by modifying and adapting the examples that ship with Ignite. Also, there are many options that Web Console provides that can be used to fine-tune and tweak schema information from an existing database system. The official documentation is a good place to start. The user and dev mailing lists are also great resources if you need further help.

In this article, we saw how to take schema information from an existing running MySQL Database System and created an Ignite project. This Ignite project enabled us to copy data from the MySQL Server into Ignite Storage, and we then performed queries on that data. At scale, Ignite would allow us to use the power of cluster computing to parallelize operations, run in-memory queries at speed, perform analytics, and use machine and deep learning. At the same time, we can preserve the business value we have in an existing legacy or heritage system. In our examples, we used the Node.js Thin Client. Ignite also supports Thin Clients for other programming languages.