programmers tend to use software to solve absolutely all problems. need to take notes? here is an application for taking notes. brainstorming? all sorts of mind mappers are available for you. even though in most cases it makes perfect sense, sometimes i find that a piece of paper and a pen are better tools for the job.

this is the first blog post in a series about using such low-tech tools as paper cards for brainstorming, planning, and designing. i’d like to start by introducing one of the most interesting and, unfortunately, underused tools for brainstorming: crc cards. crc stands for candidate, responsibility, and collaboration.

what are crc cards?

crc cards are index cards on which there are written:

the front side of a card is used to record a candidate’s name, purpose, and stereotype. 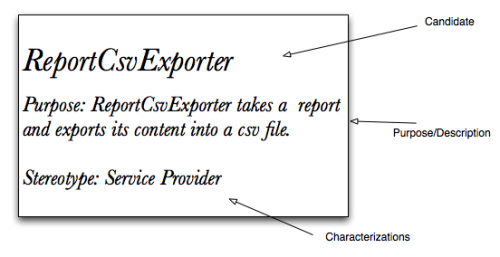 the back side of a card is used for recording a candidate’s responsibilities and collaborators. how to use crc cards?

start by writing down each candidate’s name, and maybe stereotype. next, move the cards around, and think about each candidate for a little bit. then, describe each candidate. often at this point i have a pretty good idea of what my design looks like. if it’s the case, i just stop. after all, crc cards are just a brainstorming tool aiming to flesh out the design of a new feature, or system. the goal is not to formally describe collaboration patterns, but to come up with a few good ones. in some cases, however, i pick three or four the most important candidates and write down their responsibilities and collaborators.

originally, crc stood for class, responsibility, collaboration. but soon most practitioners realized that it’s too early to start thinking in terms of classes, and it’s better to use candidate objects and roles. only after all collaboration patterns have been fleshed out, we can map roles to classes.

why not to draw all the same stuff on a whiteboard? why cards? because you can move them around, discard them, group them by an abstraction layer or a subdomain. you can do it without redrawing the whole picture. i find that the process of moving stuff around is what usually sparkles creative ideas.

the way i use crc cards is described in the book “object design: roles, responsibilities, and collaborations” by rebecca wirfs-brock, alan mckean .