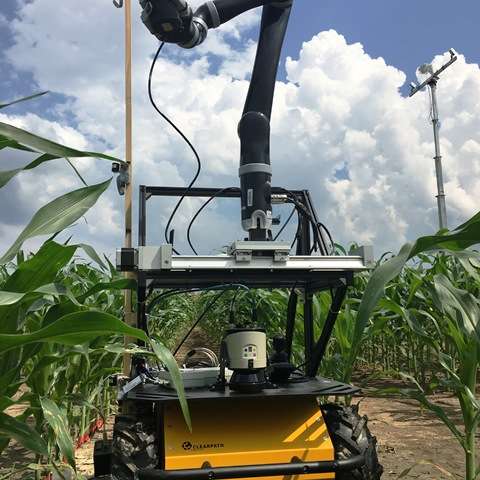 robotics and automation have perhaps been deployed in sexier fields, but agriculture has been undoubtedly one of the more interesting applications, not only of automation but the big data that typically sits alongside it.

a recent study highlights some of the progress being made, with robotics used to help develop drought tolerant corn. the researchers, from the university of missouri, developed a robotic system that they believe will transform the way scientists study crops.

the research team have previously worked to support agricultural research via the development of three-dimensional images of root growth in a laboratory setting to help test the effect of climate change on crops. this latest project has been to use robotics to help create those same kind of images out in the field.

the robotic vehicle was equipped with a mobile sensing tower as well as three levels of sensors. this allows the device to inspect an area with a 60-foot radius to identify areas of environmental stress. it is also capable of capturing data from individual plants, and can then reproduce those plants via a 3d image.

“measurements taken from the tower alert us if any of the plants are under stress, such as heat or drought,” the team say. “the tower then signals the mobile robot, which we call the vinobot, to go to a particular area of the field and perform data collection on the individual plants. the vinobot has three sets of sensors and a robotic arm to collect temperature, humidity and light intensity at three different heights on the corn plant . this is called plant phenotyping, which assesses growth, development, yield and items such as tolerance and resistance to environmental stressors by correlating these to physiology and shape of the plants.”

at the moment, the tower is only capable of covering a reasonably small area, but the team are confident that this can be easily changed to cover an entire field. this will enable fields to be monitored in a cost-effective way.

“the towers not only are inexpensive, they also are available throughout the day and night and can generate more data than any aerial vehicle could,” they say.

it’s a fascinating project, and you can find out more via the video below.