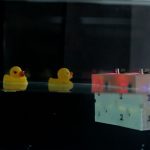 i wrote at the start of this year about an estonian project that was using a robotic submersible to explore the deep, with a particular interest in crawling shipwrecks for goodies.

the propeller-less underwater robot, which has been called u-cat, is capable of moving about with minimum disturbance, thus allowing it to operate in potentially fragile environments, such as that of a shipwreck.

it seems that such ventures are catching on, for a team from the university of sheffield have also developed an aquatic robot that is capable of underwater search and rescue missions.

the team has developed a lego style modular robot, which was documented in a recently published paper , that can be put together into a number of different shapes that allow explorers to customize the device to their specific needs.

inside each module, there are four pumps that allow it to move around.  power is provided by sucking in water and parsing it through the device, thus generating the power required.

the more modules are combined together, the more specific movements are possible by the machine.  the team has thus far built six prototypes of the machine, which they’ve dubbed modular hydraulic propulsion (mhp).

the prototypes were put through their paces by being asked to both detect a light source and then move towards it.  they were able to achieve this independently of human support.

"one of the challenges in robotics is to make robots small enough so that they can travel through confined spaces that are otherwise inaccessible. shrinking robots down, potentially to sub-millimetre scale, puts severe constraints on the hardware and therefore how much information these robots can process" the team says.

whilst there are clear use cases for the device in exploring shipwrecks and the like, the team also believe they could be useful in more mundane environments such as the monitoring of utility piping.  indeed, they may even one day be used inside the human body to deliver drugs or monitor our health.

for now, however, it seems that the search and rescue field will be the prime playground for the device, with its ability to detach and reassemble particularly useful in unknown environments that require a high level of flexibility.

it’s a project that’s well worth keeping an eye on, and you can see it in action via the video below.