My team builds integrations. A lot of integrations. Over the years, this has meant building a number of greenfield REST APIs for both internal and external consumption. In the past 12 months, we have pivoted our thinking away from “pull in data from external vendors” to “have external vendors push data to us.” This, in turn, has seen an increase in the number of APIs we are designing and building.

Historically, our API design has been largely implementation-driven. Recently though, we have moved to spec-first API design and have seen some great benefits including reduced development times, tighter feedback loops, and better API design overall.

Could the spec-first approach work equally well for your project? Read on and find out.

This Calls for a Case Study

To set the scene, let’s take a look at a recent project to provide feature flag integration in Jira (yep, that's what my team builds). This project involved building a new API that external vendors could use to associate feature flags with Jira issues. This information would then be surfaced in the Jira issue view.

This project had a few interesting constraints on it:

These constraints led us to one overarching driver: we needed to move quickly, and iterate on our API fast as we received feedback from our external customers.

Historically, we’ve designed and built Jira APIs in an implementation-first style. We might start with some initial fleshing out in Confluence to get the high-level design nailed down, but the real detailed API design happened at implementation time.

Doing API design this way has a couple of nice properties. The end result of the process is a working API implementation – there’s very little double handling going on. Plus, you can evolve the API as you encounter edge cases during unit and integration testing.

Some people would also argue that it has the benefit of keeping your API spec in sync with your implementation. The downside is that it also makes it too easy to introduce unintentional breaking changes to your API during maintenance, unless you have strict discipline or spec diffing/pact testing in place to detect it.

As with anything, however, there are a number of drawbacks to the implementation-first approach:

For our case study project, this implementation-first approach wasn’t going to cut it. Critically, we needed a much tighter feedback loop. We couldn’t afford to lose a week before we got the first feedback from our external customers on whether our proposed data model would work for them.

For the feature flags project, we switched to a spec-first approach, with the goal of tightening that all-important feedback loop as much as possible. Here’s what we recommend, based on what we learned:

We found this approach to be very successful. We got meaningful feedback from the team and our external customers and were able to iterate on the API design really quickly. 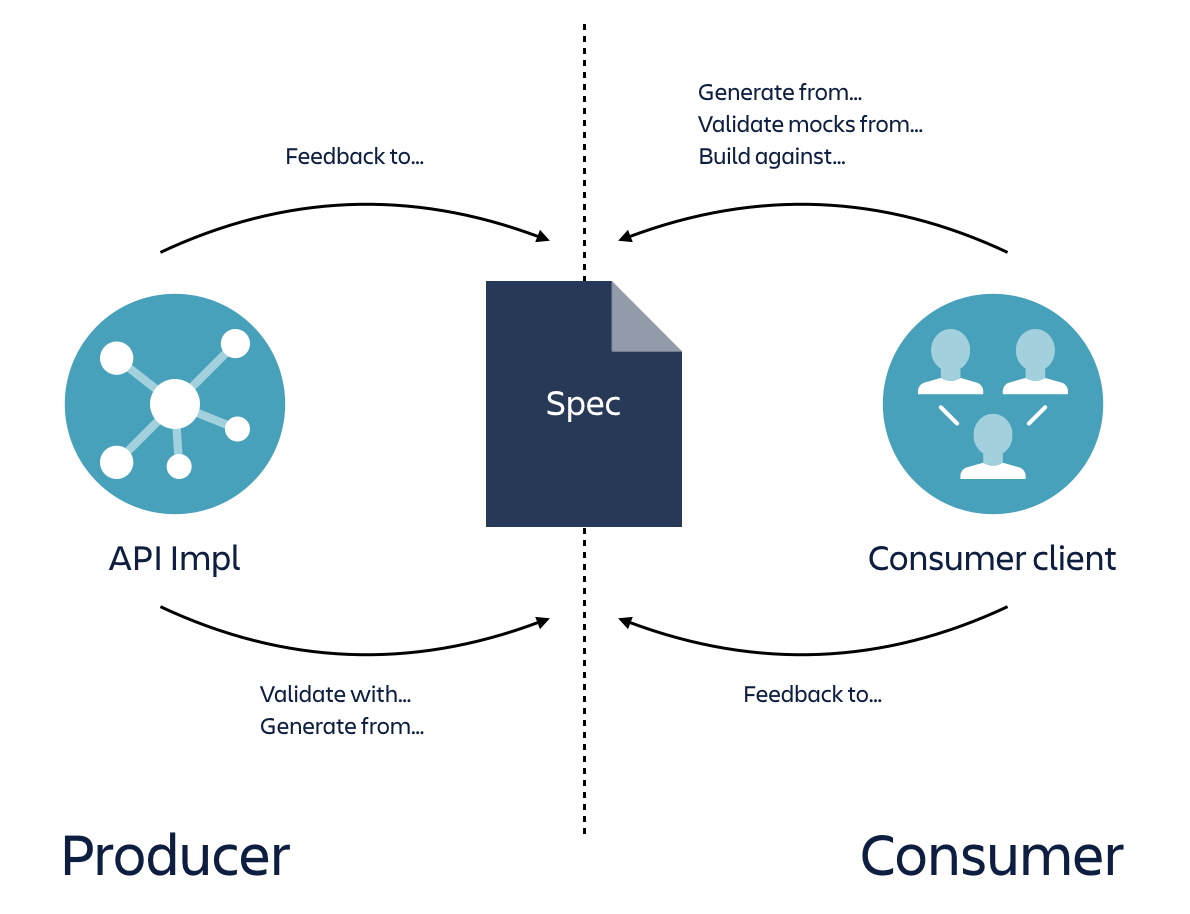 It also meant that our integrators could begin implementation on their side without needing to wait for us to finish our API implementation. They could build mocks from the Swagger spec and use that to drive tests of their implementation with confidence that it would match our implementation. We got some really positive feedback from our external partners on this approach!

To distill the discussion above, Fusion has found the following benefits with the spec-first approach:

Full Disclosure: There Are Some Rough Edges

I’m not going to pretend everything with this approach is sunshine and rainbows. We’ve found it to be a great way to build APIs, but there have been a few kinks. We’re working on ironing them out and iterating on the overall process.

To pull off this approach and ensure we can do it safely, we leverage some awesome tooling developed within Atlassian and the wider OSS community.

A super simple way to preview your Swagger / OpenAPI specifications in a pretty GUI during development. Its also a great way for your customers to explore your API if they don’t like staring at JSON or YAML.

Pact is a consumer-driven contract testing tool used extensively at Atlassian. It defines a schema for ‘pacts’ which are request/response interactions against an API.

We use this format to provide example API interactions. The beauty of using Pact for this (rather than a README or Confluence page etc.) is that the example interactions can be validated against the API spec using the swagger-mock-validator. This means our examples are always up-to-date with the API as we evolve it.

The swagger-request-validator is a Java library for validating request/response interactions against a Swagger / OpenAPI specification. We use it in our REST Assured tests to validate that our implementation matches our specification. This gives us the confidence that we can let our customers work from our API specification at the same time as we build out our implementation. On the other side of the fence, consumers can use the WireMock module to ensure that the mocks they use to drive their tests also adheres to the spec.

For non-Java projects, the swagger-mock-validator fills the same role as the swagger-request-validator. It is used to validate that Pact files adhere to an API spec, and can be used on both the producer and consumer side. We use it to validate that our example interactions validate against our API specification, and that our API specification matches our proposed request/response interactions.

Swagger Codegen lets you generate server stubs and clients for APIs based on a Swagger / OpenAPI specification. Our customers can use this to generate clients that will be able to interact with our API, and they can use it to generate mock servers to develop against while the wait for our implementation to be complete.

Published at DZone with permission of James Navin. See the original article here.