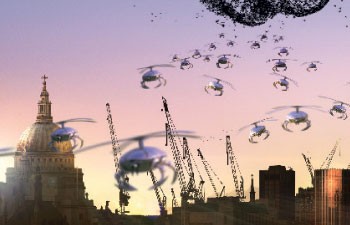 As robots come to be more common sights in our workplaces, they are becoming increasingly collaborative and capable of working effectively together.

This progress is driven by advances such as the recent MIT project to improve collaboration and coordination between robots. A new EU-backed project is bringing such technologies to the shipyard. The CARLOS project was recently completed to showcase the use of automation in a semi-structured environment.

An interesting alternative approach was proposed by researchers at the University of Lincoln. They are taking inspiration from the natural world to develop robots capable of swarming like insects.

Suffice to say, replicating such complex behaviors has thus far proven difficult, as the pheromone-based system of communication has been hard to replicate.

The researchers have built an artificial pheromone system that they believe is both reliable and accurate.  Their system uses an LCD screen and USB camera to simulate several pheromones in the form of visual trails on the screen.

The strength of these trails can be modified to provide a degree of control to experiments.  The trail can be sensed by a couple of light sensors housed on the robots.

This system goes by the name COS-phi (Communication System via Pheromone) and uses cheap open-hardware micro robots and an open-source localisation system.  This is able to track the trajectory of each robot and release the artificial pheromone.

Central to the project is an open-platform called Colias that is used to investigate the collective behavior of the swarm.

“Nature is one of the best sources of inspiration for solutions to different problems in different domains, and this is why swarm robotics has developed into such an important area of study. It takes insights from the behaviours and coordination capabilities of social insects, where the success of a group in accomplishing a task relies heavily on the interactions among its members. Among social injects, the use of pheromones is one of the most effective means of communication, but for the swarm robotics community it has also been one of the most difficult to reproduce," says the team. “That is why we are pleased to have devised an effective new system based on fast and precise visual localisation. It allows us to simulate a virtually unlimited number of different pheromones and showcases the results of their interactions as a gray-scale image on a horizontal LCD screen which the robots move on. The system means that we can produce precise and high resolution trails, control the diffusion, evaporation and density of the pheromones, and encode individual pheromones using different colours. COS-phi also simulates the interaction of different pheromones that can amplify or suppress each other, resulting in complex swarm behaviours, just as they do in the natural world.”

When the system was tested, it successfully created an environment whereby "the swarm" successfully followed a leader without any direct communication between them.

The next step is to try things out in swarm-like research projects, where it will hopefully provide a stepping stone to further exploration of the topic.

Check out the video below for more on the topic.