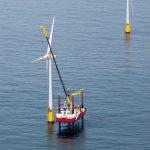 as wind turbines have become more pervasive, there have been some interesting uses of technology to manage and maintain them. for instance, i wrote last year about a portuguese company that was using drones to monitor wind farms.

rather than have inspections carried out by dangling highly-qualified engineers many meters in the air, they offer an automated solution to do the job without putting anyone in harm's way.

their drones come complete with highly tuned flight algorithms that allow the drones to fly at the precise point to effectively monitor each turbine. they’re also equipped with sensors to capture the data required, and then software that can help to manage the data that is captured.

a team from the university of manchester are exploring a range of advanced technologies to perform similar operation and maintenance tasks, especially of offshore wind farms.

this market is believed to be worth a few billion in the uk alone, with most of that cost involved in accessing the site itself. add in the complications involved in finding the kind of talented engineers such tasks require, and it’s a significant challenge for the industry.

the project will examine a range of advanced technologies, including, sensors, ai, robotics and virtual reality, all with the aim of reducing maintenance cost and effort. the hope is that these modern techniques will allow problems to be detected earlier and then be resolved in a timely and cost-effective manner.

for instance, robots and advanced sensors will be utilized to minimize the need for human engineers to operate in the hazardous offshore environment. these robots will also be capable of operating in a range of other extreme environments. for instance, they can go underwater to inspect cables or in high-voltage environments to inspect equipment.

the team also plan on using the latest sensor technology, such as sonar, to monitor cable wear and degradation underwater in real time. by pairing this with modeling and ai, the team believes it will equip companies with the best technologies to assess the data collected.

“the uk has world-leading expertise in the technologies and science in this area, but they have often operated separately. the uk engineering and physical sciences research council have supported this project to bring them together for the first time to make a real step change in this industry,” the team say.

the project will begin life as a pilot on a site off the coast of scotland, from which it will hopefully be rolled out more widely across the industry.