Agile taught us to release early and release often, Agile also taught us to get the end user involved more frequently and directly. Goes without saying that release notes are an important part of any release. But what you don’t want to be doing is manually putting together the release notes with each frequent release you do. TFS lets you manage the application lifecycle with great ease & minimal administrative overhead, if your team is already checking in the code against work items and if you are using the TFS build infrastructure, good news is you already have all the raw material for your release notes stored in the TFS repository, in this blog post I’ll show you how to use the TFS API to generate the release notes from the Team builds.

So… How does it work? 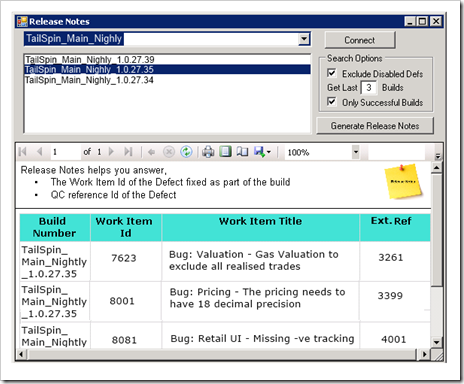 I thought this something that might come in handy. I thought this a cool means to build and share "release notes" while not requiring lots of time writing them up.