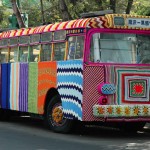 the nicaraguan city of managua had a problem.  they had 1,670 kilometers of bus routes split across 45 different lines, but no map of this network.

to try and rectify the situation, the citizens of the city took the initiative and set out to develop the first bus network map in the whole of central america.

the residents began using openstreetmap, with around 150 regular bus users teaming up to map the routes and stops of the city.

their effort is now available online , with the data behind the map available for downloading and adapting by any fellow travellers.

a similar venture has been recently undertaken in mexico city.  the city is the largest urban agglomeration on the american continent, and as such transportation is a major issue.

the scale of the network can make improvements difficult to manage.  as with managua, the city authorities lacked an open database of its 1,500 bus routes.

so, the laboratorio para la ciudad (mexico city’s experimental office and creative think-tank, reporting to the mayor) partnered with 12 organizations that include ngos and  other government offices to develop mapatón cdmx , which is a crowd and gamified experiment designed to map the city’s bus routes.

the city game ran for a few weeks in the early part of february this year, with the ultimate goal of mapping all licensed public transport routes in the city.  players would score points by mapping a route from start to finish, with the game played via android devices that are able to gather data from players whilst they use the buses.

the players can participate individually or team up with friends and family during the duration of the competition.  they’re incentivized to participate by the potential for cash prizes for those with the highest scores.

that the project hopes to provide a detailed map of the transit network in the city in the space of a few weeks is testament to the potential of crowd based approaches to geography.

if this can work in a city of nearly 9 million people, where else might the crowd be potentially useful allies in the hunt for smarter cities?