Now that we have a secured and authentication connection, the next stage in making a proper library is to make it run more than a single connection at a time. I could have used a thread per connection, of course, or even use a thread pool, but neither of those options is valid for the kind of work that I want to see, so I’m going to jump directly into async I/O in Rust and see how that goes.

The sad thing about this is that I expect that this will make me lose some/ all of the nice APIs that I get for OpenSSL in the sync mode.

Async in Rust is handled by a crate called tokio, and there seems to be active work to bring async/await to the language itself. In the meantime, we have to make do with the usual facilities, which ought to make this interesting.

It actually looks like there is a crate that gives pretty nice handling of tokio async I/O and OpenSSL so that is encouraging. However, as part of trying to re-write everything in tokio style, I got the compiler very upset with me. Here is (partial) error message: 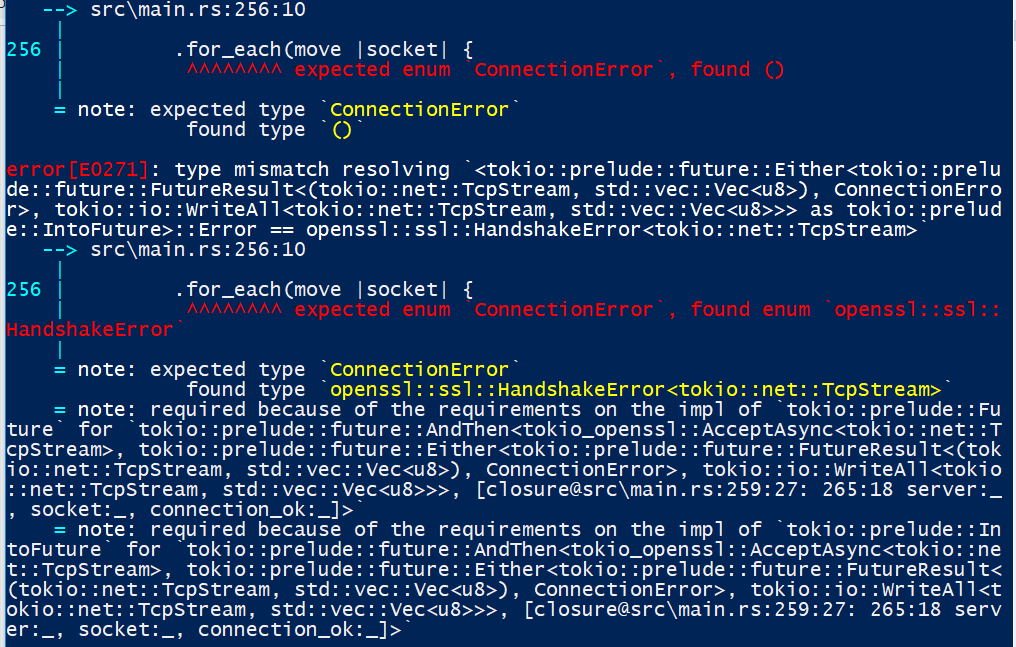 The last time that I had to parse such errors, I was working in C++ templated code and the year was 1999.

And here is the piece of code it so dislikes:

I googled around and there is this detailed answer on a similar topic that, frankly, frightened me. I shouldn’t have to dig this deep and have to start drawing diagrams on so many disparate pieces of the code just to figure out a compiler error.

Let’s try to break it to its component parts and see if that makes sense; I reduce the code in question to just:

Got another big scary error message. Okay, let’s try it without the OpenSSL stuff?

This produces the same error, but in a much less scary tone:

Okay, now this looks about as simple as it can be. And now, the fix is pretty obvious:

The key to understand here, I believe (I haven’t tested it yet), is that the write_all call will either perform its work or schedule it, so any future work based on it should go in a nested and_then call. So, the result of the single for_each invocation is not the direct continuation of the previous call.

That is fine, I’ll deal with that, I guess.

I have been programming for over 20 years; I like to think that I have been around the block a few times. And the simple task of reading a message from TCP using async I/O took me far too long. Here is what I eventually ended up with: 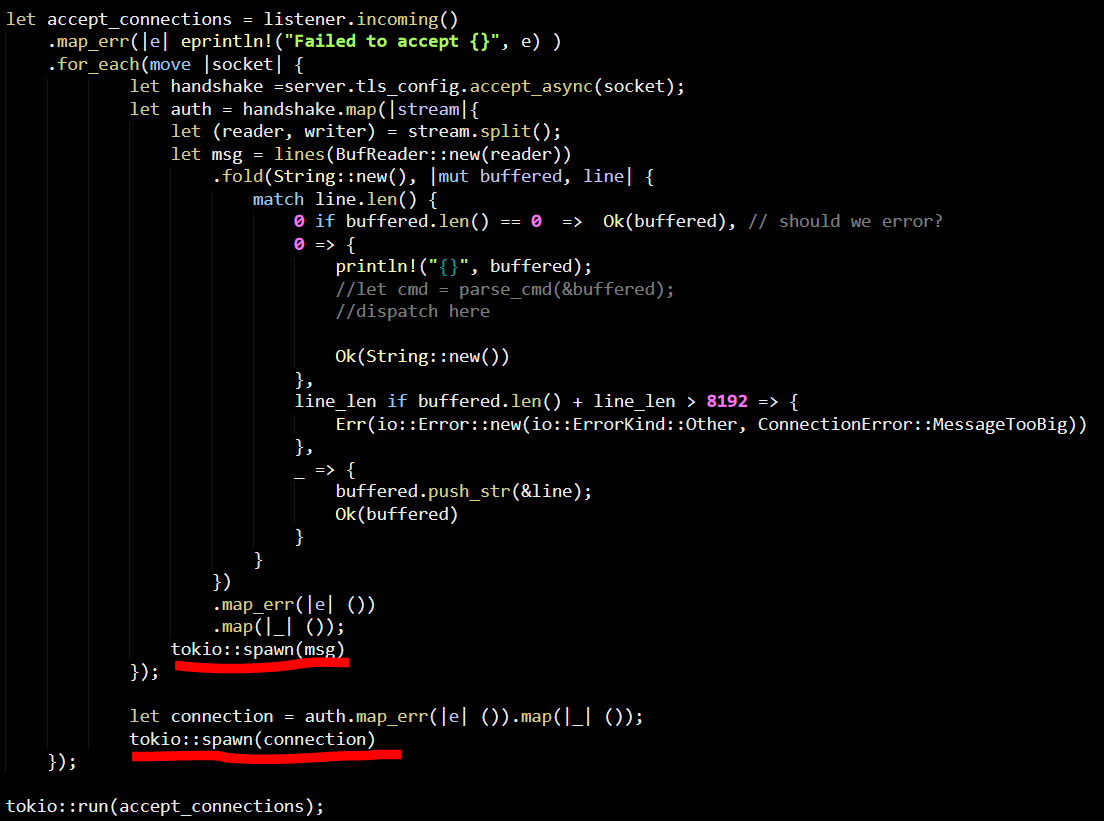 This is after fighting with the borrow checker (a lot, it ended up winning), trying to grok my head around the model that tokio has. It is like they took the worst parts of async programming, married it to stream programming’s ugly second cousin, and then decided to see if any of the wedding guests is open for adoption.

And if the last sentence doesn’t make sense to you, you are welcome, that is how I felt at certain points. Here is one of the errors that I run into:

What is this string, where did it come from, and why do we have a unit “()” there? Let me see if I can explain what is going on here. Here is a very simple bit of code that would explain things.

And here is the error it generates:

The problem is that spawn is expecting a future that gives us a result that has no meaning, something like: Future<Result<(), ()>>. This make sense, since there isn’t really anything that it can do with whatever the result is. But the error can be really confusing. I spent a lot of time trying to actually parse this, then I had to go and check the signatures of the method involved, and then I had to reconstruct what are the generic parameters that are required, etc.

Ask yourself how long it would take you to figure what the changes between these versions of the code are without the marker.

Anyway, although I’m happy that I got something done, this approach is really not sustainable. I’m pretty sure that I’m either doing something wrong or missing something. It shouldn’t be this hard. I got some ideas that I want to try, which I’ll talk about in the next post.