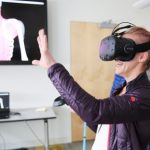 i’ve written before about the growing number of applications of virtual reality technology in training scenarios. a team from the university of virginia have developed a vr based classroom to allow teachers to receive instant feedback on their delivery and classroom management.

or you’ve got the british startup immerse, who have developed vr technology for training in industrial scenarios. their platforms aim to simulate and gamify the physical world, thus providing people with a unique learning experience.

arguably the most developed application has been in healthcare, and especially in surgical environments. one of the first startups to enter the space was medical realities, who developed an augmented reality system to help train surgeons back in 2015.

researchers from purdue university and indiana university school of medicine followed this up with an augmented reality system, called the system for telementoring with augmented reality (star), was documented in a recent study and harnesses a range of technologies to provide surgeons with a transparent display, and several sensors to improve the communication between mentor and mentee.

the same year saw virtual reality startup echopixel launch a system that used vr to create lifelike replicas of organs from 2d images to help surgeons prepare for operations. it’s an approach that was taken to a new level by the company when they offered surgeons the opportunity to use 3d printing to create a physical incarnation of the organ.

it’s a space that has also attracted its share of big guns. for instance, earlier this year microsoft teamed up with vr company stryker to apply vr in operating rooms via their hololens technology. the technology was designed to help staff reorganize the room so that it’s suitable for the operation. different tools, equipment, lighting and even patient orientation are required. it’s very much aligned with the work hololens do in the construction industry.

fellow tech giant intel has also entered the space, and have teamed up with surgical theater to offer virtual reality services to surgeons via their precision vr platform.

room one is another entrant into the space. they recently demoed a live-streamed medical surgery procedure in virtual reality. the team hopes that it will enable students and doctors to watch operations from anywhere in the world. the project featured a consortium of partners, including ericsson, bt, king’s college london (kcl), room one, and opto.

students at uc san francisco have been earning their medical stripes with the help of virtual reality for the past year or so. by using virtual reality, the university hopes to give students a more three-dimensional insight into how the body works. the platform allows students to go from the skin layer all the way down to the bones, learning how things work on the way.

the vr environment will be part of an optional component of student’s anatomy curriculum, with the hope that it will provide a useful addition to more traditional pedagogy.

“virtual reality is exciting for me as an anatomy instructor because it is going to help enhance the students’ understanding of the arrangement of the body,” the team say. “because the better they know the body, the better physicians they will end up being for the rest of their careers.”

the system not only allows individuals to play around inside a virtual cadaver, but also allows peers to follow what they’re doing on viewing monitors. the team also believe it would provide an introduction to the kind of harrowing scenarios encountered during trauma incidents.

it would allow the students to practice composing themselves and gaining control over their emotions, thoughts, and actions, before doing their best for the patient.

the system has thus far been greeted enthusiastically by students and faculty alike, and efforts are underway to expand the range of use cases it’s currently being used for.

it’s another nice example of how vr is slowly moving past the gimmick status it perhaps had in the past and towards real value in the marketplace. check out the video below to see the system in action.