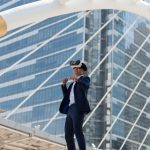 Recently I wrote about a new tool that has been developed by PwC to help showcase smart city technologies.  The company have developed a virtual reality (VR) experience that they hope will help their clients understand this landscape more effectively. The system has already been tested on a number of PwC clients from sectors such as banking, local government and transport.

The participant is placed in a VR city and tasked with spotting the 20 potential disruptions that have been hidden there. They’re then asked to rate each of the disruptions in terms of both their credibility and impact. These disruptions range from synthetic biology to megadrones.

Such virtual exploration has also been utilized by researchers at North Carolina State University, who have used virtual reality to test how people respond to greenery in cities.  The project, which was documented in a recently published paper, set out to discover just how nature impacts city dwellers, both in terms of relaxation but also safety.

The researchers captured high-resolution 360-degree images of various parts of Raleigh, North Carolina, before then manipulating the vegetation levels in each environment to create a range of different settings.  They wanted to specifically test whether greenery in built up environments was treated differently to greenery in open environments.  The results showed a fascinating difference.

This didn’t appear to be the case when people were placed in the virtual version of Raleigh’s Fletcher Park.  In that setting people seemed to prefer less vegetation density.  The authors hypothesize that in park settings people prefer to know what’s happening around them, and so are wary of dense vegetation that can limit their view.

“To a large extent, we’re hard wired to actually feel enclosure and to react as a matter of evolutionary survival,” the authors say. “We tend to use environments that give us some protection but that we also have some control over.”

The team plan to continue exploring this topic by introducing a range of new environments, including high-rise neighborhoods, whilst testing their hypothesis on a culturally diverse group of people.

The team believe that virtual reality could be a useful tool for landscape designers hoping to get feedback on potential new designs before a shovel has been deployed.

“As landscape designers, the instinct is to want to make changes, but sometimes leaving things as they are may be best,” they conclude. “This technology allows us to design a true experiment in which we control the variables, without ever planting or moving a tree.”