As Jaime Rodriguez detailed in April, Windows 8 Excellence Labs are made to help Metro developers to get a token which allows them to submit their application to the Windows Store with high confidence. I’m lucky enough to be part of this Microsoft effort and I hope meeting some of you soon :^)

A tool has been built to help Microsoft engineers to more easily check some basics of a Metro App such as implemented contracts or logos. This is a WPF Desktop application written in C# and its first task is to enumerate the installed Metro App packages.

I can imagine other scenari where you will certainly be interested in automatically checking that your application is well installed. This post will detail how a .NET developer could leverage WinRT from his Desktop application.

There's something I find oddly attractive about hacks/examples like this, where frameworks/api's/etc are used in ways that might not have been envisioned. Also I found this example kind of meta... (meta, as in WinMM meta... get it? )

I gave this a run on my Win8 box and it worked just as advertised. 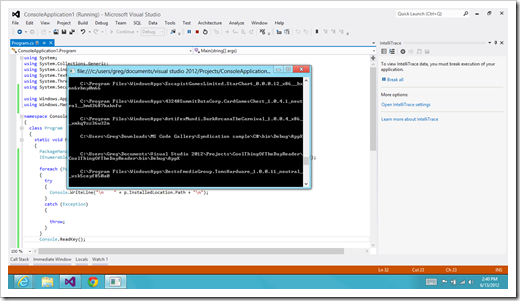