Flyway is an open source database version control and migration tool that stresses simplicity and convention over configuration. Changes to the database can be written in SQL (and in some database-specific dialects like PL/SQL and T-SQL) or Java. You interact with Flyway using a command-line client, however there are a variety of plugins that can be leveraged, including Maven, Gradle, Spring Boot, and more.

Supported databases include Oracle, SQL Server, DB2, MySQL, PostgreSQL, and others. Because YugabyteDB is PostgreSQL compatible, most third-party tools and apps will work “out of the box.” Flyway is no exception here. This allows developers to deploy and rollback schema changes to YugabyteDB using Flyway by making use of the PostgreSQL JDBC driver.

New to distributed SQL or YugabyteDB? Read on.

Distributed SQL databases are becoming popular with organizations interested in moving data infrastructure to the cloud or to cloud native environments. This is often motivated by the desire to reduce TCO or move away from the scaling limitations of monolithic RDBMS like Oracle, MySQL, and SQL Server. The basic characteristics of Distributed SQL are:

Ok, on with the demo…

In this section we are going to install YugabyteDB on the cluster. The complete steps are documented here. We’ll assume you already have a GKE cluster up and running as a starting point.

The first thing to do is to add the charts repository.

Create a namespace. In this case we’ll call it "yb-demo".

We are now ready to install YugabyteDB. In the command below we’ll be specifying values for a resource constrained environment.

To check the status of the cluster, execute the below command:

Note the external-IP for yb-tserver-service which we are going to use to establish a connection between YugabyteDB and Flyway. From the screenshot above we can see that the IP is 35.224.XX.XX and the YSQL port is 5433.

The next step is to download a sample schema and data. You can find a variety of sample databases that are compatible with YugabyteDB in our Docs. For the purposes of this tutorial we are going to use the Northwind sample database. The Northwind database contains the sales data for a fictitious company called “Northwind Traders,” which imports and exports specialty foods from around the world. The Northwind database is an excellent tutorial schema for a small-business ERP, with customers, orders, inventory, purchasing, suppliers, shipping, employees, and single-entry accounting.

Connect to the "yb-tserver-pod" by running the following command:

To download the schema and data files, run the following commands:

To connect to the YSQL service exit out of the pod shell and run the following command:

Create a database and connect to it using the following commands:

We can now create the database objects and load them with data using the files we downloaded to "yb-tserver-pod" using the following commands:

Verify that the tables are created by running the following command:

Verify we have data by issuing a simple SELECT:

By default, a YugabyteDB installation doesn’t have a password setup for the default "yugabyte" user. Specifying one is done the same way you’d do it in PostgreSQL.

For the purposes of this demo we’ll be installing and configuring Flyway Community Edition. After downloading Flyway, navigate to the flyway-6.5.2 directory. We are going to want to make a few configuration changes to get Flyway connected to the YugabyteDB database we just deployed.

In the conf directory locate the flyway.conf file. Uncomment or modify the following lines:

At this point Flyway will be able to connect to YugabyteDB running on GKE.

You should now see a project structure similar to the one below in your IDE of choice. 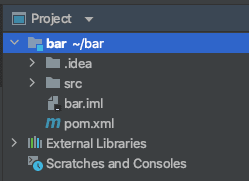 Edit the pom.xml and add entries for the Flyway plugin, YugabyteDB (PostgreSQL) connectivity, and PostgreSQL Driver.

Note: There are few other configuration options when it comes to Flyway and Maven. You can find them detailed in the Flyway Documentation.

Create the migration directory ~bar/src/main/resources/db/migration to hold our SQL scripts.

Create a SQL script in this directory with the following content named V1__create_promotions_table.sql.

We can now execute this migration at the command line.

We can verify that the "promotions" table was indeed built. 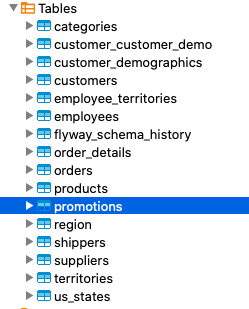 We should also be able to see this migration in the "flyway_schema_history" table.

Create the SQL script below, place it in the migration directory with the following and name it "V2__insert_promotions.sql". 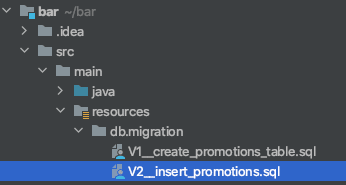 We can now execute this migration at the command line.

Let’s verify that the data was inserted into the "promotions" table.

We should also be able to see this migration in the "flyway_schema_history" table.

That’s it! You now have a 3 node YugabyteDB cluster on GKE, with versioning control managed by a local installation of Flyway. For more information about how to perform more advanced operations in Flyway using the Java API, Maven, or Gradle, check out their documentation.