how do you manage dependencies in your project? since a picture speaks a thousand words, i’ve always been a fan of visual management. unfortunately, visual studio professional doesn’t provide a way to do this. in the premium and enterprise editions, you can visualize code dependencies on dependency graphs , but i don’t that think this is enough. an architectural diagram with every assembly or namespace in my solution doesn’t tell me that much. it contains too much information.

fortunately, there is a tool that can help you manage dependencies in the .net world: ndepend (there is also a java port – jarchitect). ndepend is a static analysis tool that, among other things, allows you to visualize dependencies. after i first ran ndepend on a project, i was overwhelmed with information. then i took some time to play around and discover what can it tell me about my solution. ndepend integrates into visual studio quite nicely and points you in the right direction through tools, tips, and links. this is useful for people who prefer learning by doing. aside from giving you information, it also tells you what to do with that information.

ndepend has two main views for managing dependencies: the dependency graph and the dependency structure matrix. apart from these, there is also an abstractness vs. instability report that can be helpful. in this post, we’ll discuss some of the things that these views can tell you about your solution.

you’re probably used to dependency graphs. in this graph, the nodes represent elements (assemblies, namespaces, types, members) and the edges represent dependencies. this view is useful when there is a limited number of nodes. when the graph gets too big, this view gets unmanageable.

viewing the internal structure of an element

i find this useful for discovering parts of the code that you don’t know. for small enough classes, you can use the graph view to analyze cohesiveness. just by looking at the graph above and hovering over different elements, you can notice that it’s cohesive. if you see two clusters of members, maybe it’s a good idea to extract a class. this can be a good entry point when you want to refactor a god class, although it will probably look like this:

in this case, it’s probably best to use the dependency matrix, which we’ll discuss shortly.

for a given element, ndepend also allows you to see inbound dependencies, outbound dependencies or, for a class, its inheritance tree. again, this can provide useful insight for refactoring.

let’s say that, for some reason, you decided that mock-assembly shouldn’t reference the nunit.framework assembly. how would you break this dependency? you can see what codes need to change if you select the edge and build a graph made of code elements involved in this dependency . 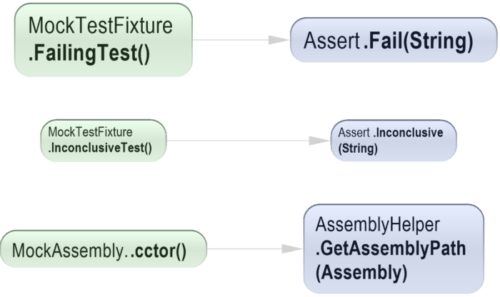 now you know which method level dependencies you have to break! think of how useful this is when you are trying to extract a class from a big ball of mud or when you’re reducing coupling in a legacy code base by introducing responsibility layers. this basically allows you to break down work into tasks.

tip: you can also click on the edge and generate a code rule that warns if this dependency exists. this ensures that people don’t accidentally introduce unwanted dependencies.

the problem with the dependency graph is that it doesn’t scale. as in the god class example above, you wouldn’t know where to start. this is where the dependency structure matrix (dsm) shines. this matrix contains the same elements in the rows and columns headers. if the element in row a depends on the element in column b, then the corresponding cell will contain information about that dependency.

before digging deeper into dsm use cases, we need to define the types of logical coupling:

now that we have defined what afferent and efferent coupling is, how do you calculate it? for a software package (namespace or assembly), wikipedia says that you should count the number of types . but what about types? if type a uses 4 methods from type b, what should be the values of ca and ce?

there probably isn’t a definitive answer, so i would like to have the option to calculate it in different ways. the dsm has this flexibility. you can select the weight on cells to be:

also, as you can see in the list above, you can even select indirect dependencies. this could give you a measure of the impact of a change and how it could cascade through the solution.

the dsm is useful because it makes patterns in your code base visible. and if patterns are visible, you can also notice when things go astray.

for example, let’s say you look at the dependencies between assemblies and you notice the following line with many blue cells (for a given row, blue cells indicate elements that depend on it):

is this a bad thing? as usual, it depends. if this is framework type code, then you would expect it to be used in many places. this is because framework code should be stable. if you don’t change it, then you don’t have to worry about breaking its clients. in fact, it might be a warning sign if this type of code isn’t used that often.

for example, you would expect that a substitute framework (like nsubstitute or fakeiteasy) to be used in many of your unit test projects. if it isn’t, then some questions come to mind: are people using other substitute frameworks? are they hand coding their own stubs and mocks? maybe they aren’t using fakes at all (or testing will real collaborators). again, this isn’t necessarily a problem, but when a certain type doesn’t fit the pattern, you should dig deeper.

what if a dependency injection framework has high incoming coupling? this is a big warning sign. only the composition root should reference it. if you have references to a di framework scattered across the code base, you’re using it wrong. the dsm makes this problem visible.

even if it’s not framework type code, the principle is the same: code with high incoming coupling should be stable. so, another warning sign is concrete types with high ce (we’ll also touch on this in the section). the solution is simple: extract an interface so you depend on abstractions, but extracting an interface is just the first step. you should take the time to design the contract and think if the abstraction adheres to the single responsibility principle. if it doesn’t, it’s better to split it into multiple interfaces. applying the interface segregation principle helps you keep the interfaces small and focused.

what if you see this column with many blue cells (for a given column, blue cells indicate the elements that it depends on)? is this a bad thing?

it depends. most probably, it is a problem. code with high outgoing coupling usually doesn’t do only one thing. but there are exceptions.

the dsm is good at detecting layered code. if you don’t have dependency cycles, then the matrix should be triangular: all blue cells in the lower left triangle and green cells in the upper right triangle. code like this is easier to understand and reason about.

these are just a few examples of patterns that you can observe using the dsm. every project is unique, so you should think about the context when analyzing your own project. after i first ran ndepend on my project, i started looking for clusters of elements and elements that don’t fit in their surroundings. the dsm gives you a good overview of the main components if you’re looking at an assembly or namespace level. you also have the option to zoom in and see dependencies for types and even members. it’s interesting how many things a matrix can tell you about your code base.

in most of my projects, i have used an assembly as a logical component. this led to a large number of projects and slower builds. visual studio works better with fewer larger assemblies than with many smaller ones. and, if you think about it, it makes sense, since an assembly is a physical unit. a better approach could be to use namespaces as logical components . this will reduce the number of assemblies. the problem is that, although visual studio can prevent introducing dependency cycles between projects, it can’t detect dependency cycles between namespaces. this makes it easy to introduce unwanted dependencies. fortunately, these cycles are visible in ndepend’s dsm:

the black cells indicate namespaces that are mutually dependent. the red rectangles show all the elements that are part of a dependency cycle. so, if you treat namespaces as logical components, this matrix shows that you have a problem. usually, even though two namespaces depend on each other, there is a parent-child relationship. this means that there are more dependencies in one direction than in the other. to remove the dependency, you can:

if there is a large number of dependencies both ways, maybe the code is telling you that these two namespaces are one component. in this case, you could merge them.

let’s assume you’re sold on the idea to use namespaces as logical components, but your current solution has hundreds of projects. how do you go about merging assemblies? one idea would be to look at the current dependency structure and see what highly coupled components it detects. 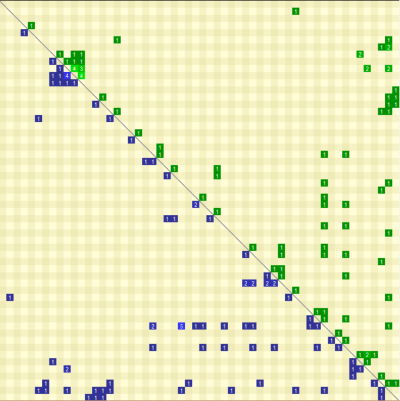 in the image above, the square in the upper left corner contains a tightly coupled component. you can investigate the dependencies between the assemblies and, if appropriate, merge them in a single assembly, with a namespace per existing assembly. since there are no dependency cycles between assemblies, this will create a nicely layered component. this should create highly cohesive assemblies. this idea is not limited to assemblies. you can apply it to detect tightly coupled clusters of types or namespaces too.

another interesting view is abstractness vs. instability.

uncle bob defined these metrics in the principles of ood article series:

with this definitions, the instability metric tells us how easy is to change an assembly. a stable assembly is hard to change. this is because it has a large number of incoming dependencies. when you change it, you risk breaking its clients. what’s important is to balance abstractness and instability. first, let’s discuss what zones you want to avoid:

balancing abstractness and stability means that we want to be as close as possible to the main sequence. this contains the assemblies for which a + i = 1. the ideal positions are on the edges of the main sequence:

although it might seem daunting at first, learning to read the data that ndepend gives you can help improve the quality of your product. architects will find the high-level view useful for detecting architectural inconsistencies. developers will find it useful to understand code and get all the information needed to refactor it. i’ve just started using ndepend, but i already feel it’s helping me make more informed decisions.