"A picture is worth a thousand words." Probably, we have all heard that piece of wisdom before. In my experience, having some — even rudimentary — sketching or drawing capabilities is an essential Scrum Master skill. Visualizing a tricky issue while explaining the background to a stakeholder, someone from the management, or a teammate helps to pave the way to have a meaningful discussion.

Let me introduce you to an example sketch based on the Tuckman model of group dynamics I use in my Professional Scrum Master training classes to make the effort and cost of creating a Scrum team easier understandable. 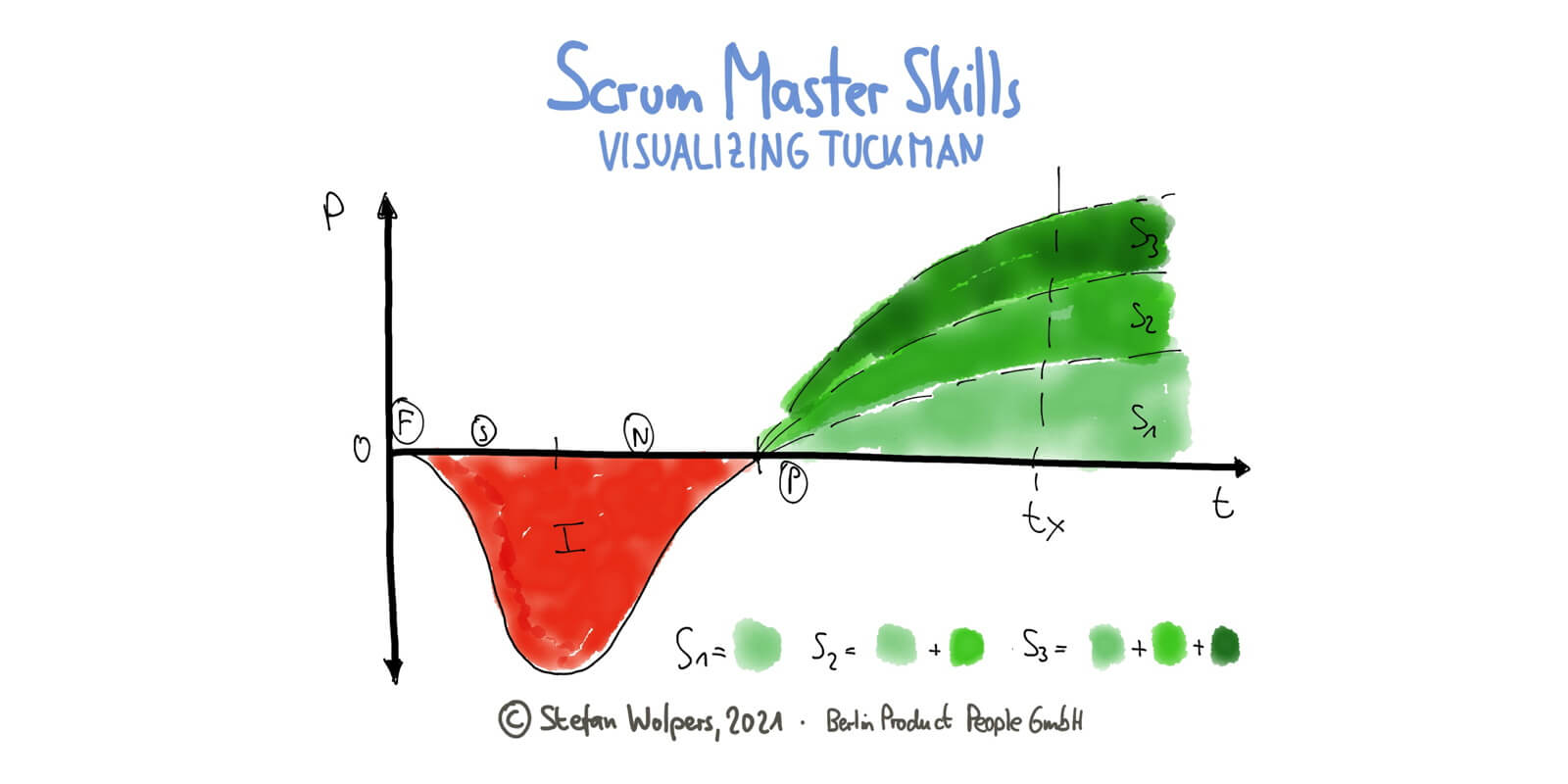 In 1965, Bruce Tuckman introduced a model describing team building dynamics. While all models are wrong, some are useful, and Tuckman’s model certainly falls into the latter category. The original model comprises four stages forming, storming, norming, and performing that a group of individuals probably goes through on their path to becoming a Scrum team pursuing a common purpose.

The purpose of the following sketching exercise is to point at the likely costs of changing the composition of the Scrum team rapidly or regularly, probably initiated by the management or driven by a lack of team success, resulting in low team morale.

Let us assume for the visualization that the future Scrum team self-selected at t=0. The vertical axis represents all team members’ combined productivity or effectiveness, and the horizontal axis covers time. The sum of all contributions of those individuals to an imaginary outcome of the group at the beginning is set to 0.

According to Tuckman, we now enter the storming/norming phases, and we will first see a drop in contributions of all individuals as they are preoccupied with figuring out their new internal team structure. That is followed by an increase in effectiveness as individuals merge into a team during the norming phase. Nevertheless, the two phases represent an investment by the organization, represented by the red area below the time axis. (Loss of effectiveness over time.)

Once we get to the performing phase, the Scrum team will now be more effective than the previous group of distinct individuals. The resulting return on the (team building) investment is represented by the green areas. Depending on how well the team building went, die “amortization period” will be different, depending on usual factors like organizational culture, industry, individuals involved, level of support from the organization, etc.

Now, suppose you add the resulting dynamics of changing teams by adding or removing team members frequently to the narrative. In that case, even the most hardened number-driven managers understand that this management reflex requires more thought: Reinitiating the Tuckman cycle regularly is not a sound business decision.

Also, the Tuckman Model sketch helps to explain why dynamic re-teaming works when the participants know each other well: the red area will be significantly smaller than the resulting green area. Consequently, the team building will be a (very) short process that probably even fits into a Sprint of one or two weeks.

Sketching this "Scrum team building by Tuckman" graph takes five minutes and is, in my experience, an excellent opener for meaningful discussion. You can have this conversation anywhere: in a café using a napkin, on a whiteboard, or virtually. (In my training classes, I use an iPad and an app called Paper to make these sketches.) Just give it a try!

How are you communicating the challenges of Scrum team building to stakeholders and the management? Please share them with us in the comments.