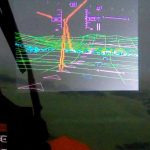 while it's probably fair to say that virtual and augmented reality remains a very niche activity, there are signs that it is gaining ground, not least in the training industry.

i've written previously about a number of interesting examples, whether it's helping to train budding surgeons or teachers , and the list is steadily expanding.

one of the more interesting ones involves an augmented reality helmet for use by pilots of rescue helicopters. the device, which has been developed by researchers at the technical university of munich, is designed to help them to detect potential hazards even when visibility is poor.

the software combines terrain information with readings from a number of sensors on the helicopter itself. this data is then processed onboard the helicopter and parsed through the head-mounted display.

so the pilot has access to both what his eyes can see and that which they cannot. the display is also capable of showing the pilot traditional metrics such as speed and altitude of the craft.

when the system was tested on 16 professional pilots, the results revealed a significant boost in performance when visibility was reduced to below 800 meters. in such perilous conditions, the ar allowed them to fly both faster and more safely than without the extra information. what's more, the pilots also reported feeling less stressed, both physically and mentally, when wearing the headset.

as you can imagine, these results were extenuated when visibility got worse still.

"the new technology can reduce the risk when helicopters are operated," the research team say. "the main problem is poor visibility caused by clouds or snow, or dust blown up when taking off and landing. augmented reality can help to overcome this white-out or brown-out phenomenon."

suffice to say, more testing is required before this hits the marketplace, but it’s a nice example of how augmented reality can benefit pilots.

another interesting recent example of the potential of vr comes from researchers at abertay university in scotland. they have been working to build interactive 3d models of human organs so that doctors can be trained on virtual items rather than the real thing.

the team has used game-based approaches to give medical students life like models that can be manipulated and dissected digitally.

it marks a fundamental shift away from traditional methods of training that rely on human material that has been donated for teaching.

"computer games technologies have huge potential beyond the gaming arena through their ability to create genuinely interactive virtual environments that can massively enhance interactions and experiences for people in all kinds of settings. this project is an ideal demonstration of how learning can be transformed for anatomy students, and the principles and techniques are equally applicable across a wide range of other disciplines, too," the researchers say.

it's an approach i first wrote about last year with a startup called echo pixel, which received approval by the u.s. food and drug administration and are in trials in a number of hospitals around america.

it can be tempting to think of vr as something of a gimmick, but these examples show that it can have some pretty cool implications, not least in the training environment.