Developers ask for device access by the application manifest. This XML file is in every Windows 8 app. It is manipulated by the GUI editor or notepad (for the die hard). 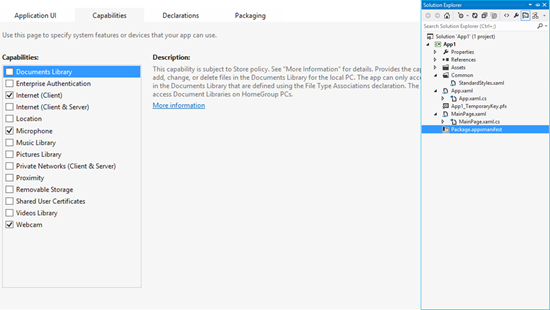 Important note: checking webcam lets you capture photos. However, to capture video (including access to the vide stream) you need to ask for webcam and microphone. That’s just how it works.

Do you remember with desktop applications, to open a file you call the OpenFileDialog? You didn’t build the dialog, you just invoke it. The user picks some file and, presto, the dialog hands it to your code.

Just like that OpenFileDialog, the Windows 8 CameraCaptureUI dialog lets the user take a photo or video and simply hands the resulting image back to you. All you do is invoke it. 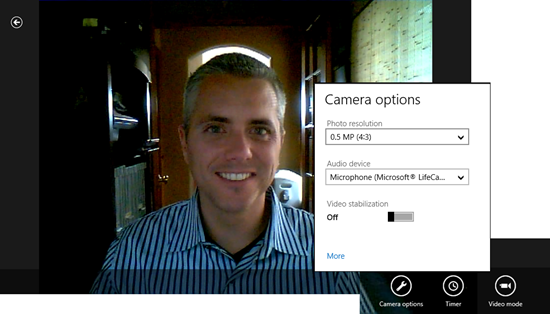 The best part of the capture dialog is that it handles everything for you. Cropping photos, re-taking photos, camera settings – they are all part of the dialog and implemented for you, for free.

In the code above, those three lines really are it. I instantiate the capture UI and call it CaptureFileAsync() method, indicating by its argument if the result should be a photo, video or either. In the second command (third line) I move the resulting file (defaulted in the temporary file) to my application’s isolated storage.

The CameraCaptureUI is the same mechanism for capturing video. In fact, other than the CaptureFileAsync() argument value, it’s the same code and demonstrated in the section above.

Because the CameraCaptureUI is a stand-alone, brokered dialog, it means it does its job and then returns the result. It could happen that your application needs (or wants) to show the user a preview of the camera – even to the point of handling the monotony that the CameraCaptureUI handles for you out of the gate.

No problem. Enter the <MediaCapture /> XAML element. (Note: there’s a Windows 8 SDK sample for this). This clever element lets developers preview the output of the camera without using the CameraCaptureUI.

You can create a simple UI that previews and shows a captured photo like this:

The screen above is accomplished with some very simple XAML:

In the XAML above, I implement the <MediaCapture /> element which we use to preview the camera on the device. To make this work, however, you need to do a little code behind. Like this:

In the code above, I am effectively “turning on” the MediaCapture element. First with it’s InitializeAsync() method, and then it’s StartPreviewAsync() method. 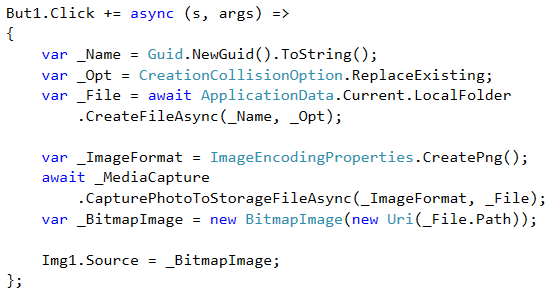 In the code above I create the target file. Then I use the MediaCapture which is the source of my CaptureElement to call CapturePhotoToStorageFileAsync(); This well-named method takes the current preview frame and saves it to the specified file. Presto, your own camera!