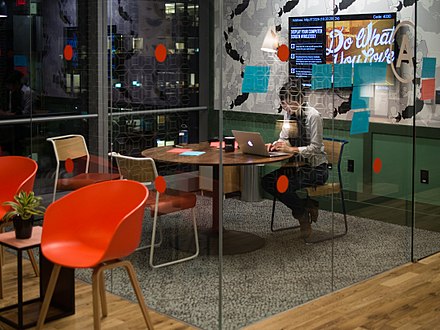 In the earlier days of wearable tech, I remember there were great amounts of media interest around the idea that people wearing a Fitbit or Pebblewatch at work could be subject to undue surveillance by their employers. Today, there are many employee health programs that their employer-funded health insurance tracks fitness metrics such as blood pressure and the number of daily steps in exchange for bonus points, Pebblewatch is no more, and the apps we willingly upload onto our phones are offering more data on our daily lives than ever before. But if you own a smartphone and happen to work in a smart building where everything from lighting, utility usage, meeting room occupation, and people movement is tracked, things get a bit more interesting.

WeWork Knows All About Its Inhabitants

Enter WeWork/We Company (aka We for the purposes of this article.) As of early-January 2019, WeWork had a valuation of roughly US$47 billion and managed 10,000,000 square feet of office space. They have over 425 coworking spaces in over 100 countries. They also own a series of children's schools called wegrow and welive for digital nomads and traveling executives. Last year, they acquired Meetup and Teem. Then, in February of this year, they acquired spatial analytics company Euclid. In announcing the acquisition, WeWork asserted:

" With this addition to our offering, we will help enterprises better understand how their employees use workplaces and create more productive, engaging spaces for their teams."

Then, it was revealed last week that WeWork is starting a “future cities” initiative, headed by former Waze and Google executive Di-Ann Eisnor and futurist designer Dror Benshetrit.

Euclid works with Wi-Fi systems from Cisco, HP, Zebra, and others to access media access control (MAC) addresses from smartphones, which are then encrypted and stored on its servers. They then track foot traffic, duration of visit, and other metrics on locations such as shopping malls, airports, and fast food restaurants, with the aim of targeted marketing and increasing retail spend. Applying these analytics to We locations generates an awfully large amount of data insights — everything from meeting room occupation.

Bloomberg reports that We is also testing several types of sensors, including thermal and motion detectors and Bluetooth check-ins. These provide insights into how buildings are actually used — the routes most often taken, time spent in meeting rooms, office occupancy, etc. They also are deploying their know how-to on their consultancy work: In one example, when a law firm from New York wanted to understand their use of conference rooms, We placed battery-powered thermal sensors under conference room tables in order to measure how many pairs of legs were present and for how long. The finding revealed that conference rooms are rarely full and can be designed in much smaller sizes.

How Much Data and What Is it Worth?

When you consider that We has access to data sets from Euclid's people tracking, Teem's calendars and bookings, and MeetUp's membership and event attendees, they've a pretty rich, expansive amount of data to enable them to make assumptions and assertions about the way 'their kind' of people inhabit buildings and the spaces around them, making a fitness tracker that tracks a wearer's steps seem laughable by comparison.

Such a data deluge of this magnitude that has the potential to make a very compelling influence into smart city planning — including the location of surrounding businesses and residences, and the location of local transport. It's easy to envision cities, where the haves and have nots, are even more sharply delineated than at present, with favorable treatment given to the behemoth We company, in exchange for not only their taxes but for sharing their data with the city.

Will We Attract the Criticism of Side Walk Labs?

It's somewhat reminiscent of the criticism that surrounds Alphabet's Quayside Sidewalk Labs initiative in Toronto where a futuristic test bed is the world’s first neighborhood built from the Internet up. According to Sidewalk Labs:

“With heightened ability to measure the neighborhood comes better ways to manage it, Sidewalk expects Quayside to become the most measurable community in the world.”

In general, citizens are wary of public authorities outsourcing tasks to private companies. In the case of smart cities, researchers and citizen advocates are questioning transparency and privacy of Quayside in regard to who will own publicly collected data, will it be monetized, and for what reward. It's easy to speculate that We could attract not dissimilar criticism if their reach was to extend beyond its existing form to public spaces where people don't surrender their data in exchange for exclusive membership.

But let's pull it back a second — the "future cities" initiative implies a well-intended mission where We could effectively offer cities-detailed analytics based on their spaces and enterprises in order to make cities run more smoothly and solve intractable habitual problems. But until we know more about the initiative, it's very easy to envision a city branded with the We logo where preferential treatment is given to the We people (let's not kid ourselves, membership to the world of We is restricted to those with the financial privilege to do so) who relinquish their data privacy in exchange for easier, seamless, more connected lives.