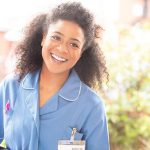 my partner works in community health and so she finds herself going out into the homes of her clients to discuss their health. suffice to say, the vast majority of these encounters are perfectly safe, but she does nonetheless have to work with families for which domestic violence is an issue or alcohol abuse or any number of potentially threatening circumstances.

as such, she’s equipped with a device, called skyguard , that she uses to both alert colleagues and emergency services if things are not well, and also to allow her managers to keep track of her whereabouts in case she goes ‘off the grid’ for a prolonged period.

as the workforce becomes more remote and distributed, it has become an area of increasing innovation. one such innovator is finnish startup bittium . not only do they track the location of remote workers, but they’re also capable of detecting their vital signs.

“our task, which we called “vertical application in protective monitoring”, focused on processing data from the wearable sensor passively, i.e. without any user interaction, and to be able to produce actionable recommendations or enable sensors based on location. recommendations and alerts can be triggered based on a number of variables including location, acceleration, temperature or devices coming on or going off-line,” the company said.

the company developed their product via the european institute of innovation & technology (eit) digital high impact initiative. the focus of the work is to develop iot platforms capable of operating in multiple verticals.

“we wanted to look this from the perspective of a passive application – let the application automate the actions on behalf of the user and thus make the life of, for example, a community care worker a bit easier. also, as a side effect we would expect productivity to increase as well, as through automation the worker can meet more patients during a given day,” the team continued.

the project enrolled expertise from a range of sources, including engineering from italy, who worked with bittium on the body area networks (ban), personal area networks (pan) and wearable integration. input was also received from ericsson and the tampere university of technology to extend the device management to wearable devices and to facilitate semantic interoperability of sensor data across different vendors’ devices.

healthcare is an area of particular interest. the wearable device offers users the ability to easily identify the location of staff as well as contact help in an emergency. it also utilizes accelerometers to measure movement, and biosignals to tap into the heart-rate and so on of the user.

the company believes their service trumps those such as skyguard because they aren’t standalone devices purely for monitoring safety and location. whilst they easily integrate sensors, mobile apps and cloud intelligence to provide location based support, they can also be used for many things aside from that.

their safemove mobile vpn product is already in use across a number of nhs trusts, and it will be interesting to see where it, and similar products, go from here.