The subject of Web resource caching is as old as the World Wide Web itself. However, I'd like to offer an as-exhaustive-as-possible catalogue of how one can improve performance by caching. Web resource caching can happen in two different places: client-side - on the browser and server-side. This post is dedicated to the former; the next post will focus on the latter.

The idea behind caching is simple: if a resource is time- or resource-consuming to compute, do it once and store the result. When somebody requests the resource afterwards, return the stored result instead of computing it a second time. It looks simple - and it is, but the devil is in the detail, as they say.

The problem is that a "computation" is not a mathematical one. In mathematics, the result of a computation is constant over time. On the Web, the resource you requested yesterday may be different if you request it today. Think about the weather forecast, for example. It all boils down to two related concepts: freshness and staleness.

When a response is "fresh" in the cache, it can be used to satisfy subsequent requests without contacting the origin server, thereby improving efficiency.

Remember that the WWW was relatively simple at its beginning compared to nowadays. The client would send a request, and the server would return the requested resource. When the resource was a page, whether it was a static page or a server-rendered page was unimportant. Hence, early client-side caching was pretty "rustic".

I won't talk here about the Pragma HTTP header since it's deprecated. The most straightforward cache management is through the Expire response header. When the server returns the resource, it specifies after which timestamp the cache is stale. The browser has two options when a cached resource is requested:

The benefit of Expire is that it's a purely local decision. It doesn't need to send a request to the server. However, it has two main issues:

Cache-Control to the Rescue

The Cache-Control header aims to address the following requirements:

All in all, Cache-Control is quite complex. It might be well the subject of a dedicated post; I won't paraphrase the specification.

However, here's a visual help on how to configure Cache-Control response headers. 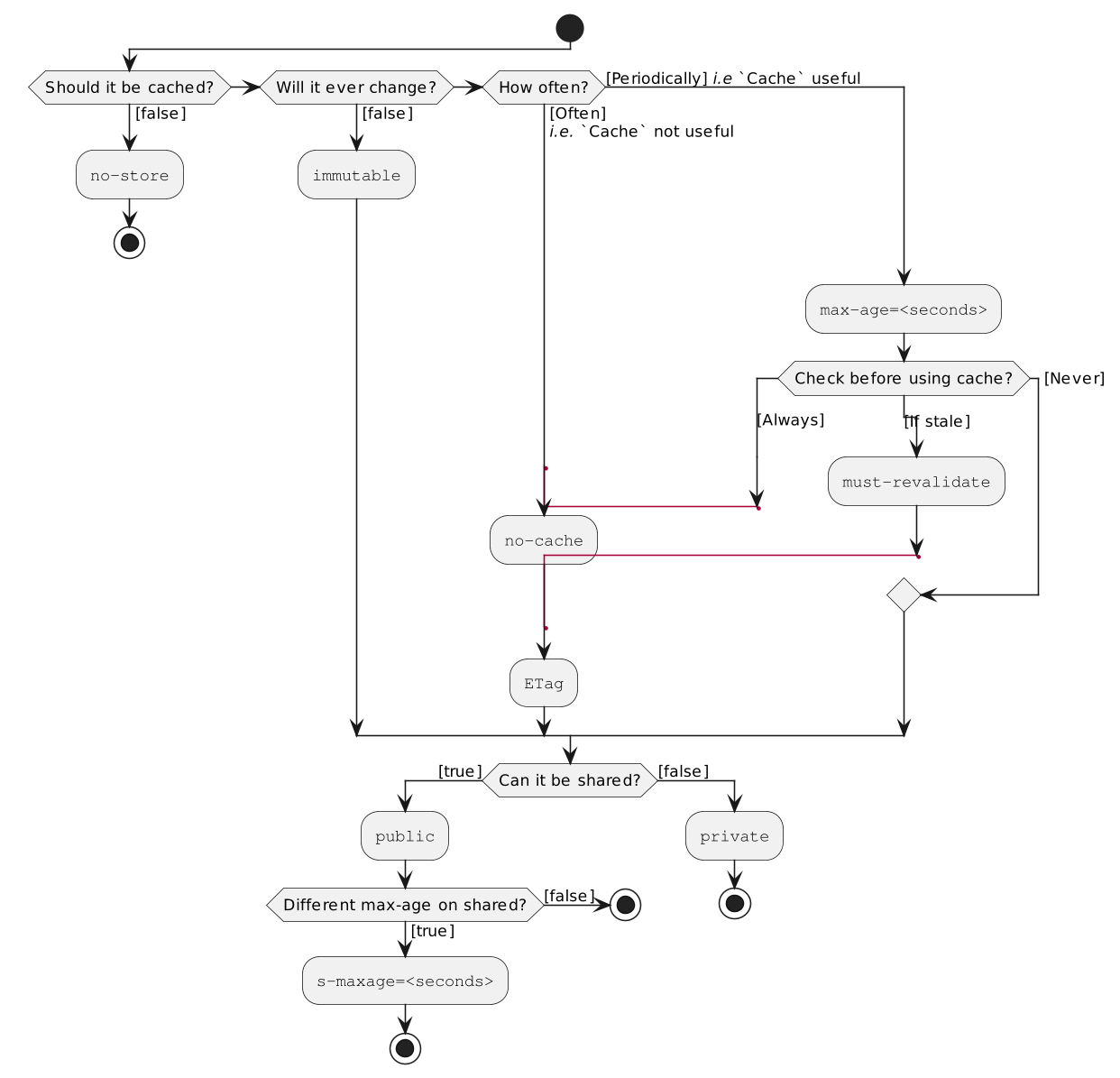 The Cache-Control page of Mozilla Developer Network has some significant use cases of Cache-Control, complete with configuration.

As Expire, Cache-Control is also local: the browser serves the resource from its cache, if needed, without any request to the server.

To avoid the risk of serving an out-of-date resource, the browser must send a request to the server. Enters the Last-Modified response header. Last-Modified works in conjunction with the If-Modified-Since request header:

The If-Modified-Since request HTTP header makes the request conditional: the server sends back the requested resource, with a 200 status, only if it has been last modified after the given date. If the resource has not been modified since, the response is a 304 without any body; the Last-Modified response header of a previous request contains the date of last modification. Unlike If-Unmodified-Since, If-Modified-Since can only be used with a GET or HEAD.

Let's use a diagram to make clear how they interact: 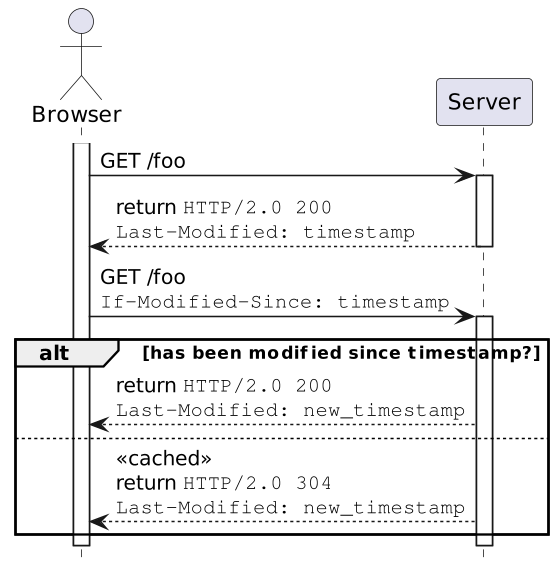 Note: the If-Unmodified-Since has the opposite function for POST and other non-idempotent methods. It returns a 412 Precondition Failed HTTP error to avoid overwriting resources that have changed.

The problem with timestamps in distributed systems is that it's impossible to guarantee that all clocks in the system have the same time. Clocks drift at different paces and need to synchronize to the same time at regular intervals. Hence, if the server that generated the Last-Modified header and the one that receives the If-Modified-Since header is different, the results could be unexpected depending on their drift. Note that it also applies to the Expire header.

Etags are an alternative to timestamps to avoid the above issue. The server computes the hash of the served resource and sends the ETag header containing the value along with the resource. When a new request comes in  If-None-Match containing the hash value, the server compares it with the current hash. If they match, it returns an 304 as above.

It has the slight overhead of computing the hash vs. just handing the timestamp, but it's nowadays considered a good practice.

The most recent way to cache on the client side is via the Cache API. It offers a general cache interface: you can think of it as a local key value provided by the browser.

Here are the provided methods:

The Cache API works in conjunction with Service Workers. The flow is simple:

It allows us to put resources in the cache after the initial load so that the client can work offline - depending on the use case.

Here's a summary of the above alternatives to cache resources client-side.

Note that those alternatives aren't exclusive. You may have a short Expire header and rely on ETag. You should probably use both a level 2 alternative and a level 3 one.

A Bit of Practice

Let's put the theory that we have seen above into practice. I'll set up a two-tiered HTTP cache:

We only need to add the Cache-Control response header. We achieve it with the response-rewrite plugin:

Let's do it without a browser first.

To prevent the server from sending the same resource, we can use the ETag value in an If-None-Match request header:

The result is a 304 Not Modified as expected:

Now, we can do the same inside a browser. If we use the resend feature a second time before 10 seconds have passed, the browser returns the resource from the cache without sending the request to the server.

In this post, I described several alternatives to cache web resources: Expiry and Cache-Control, Last-Modified and ETag, and the Cache API and web workers.

You can easily set the HTTP response headers via a reverse proxy or an API Gateway. With Apache APISIX, ETags are enabled by default, and other headers are easily set up.

In the next post, I will describe caching server-side.

You can find the source code for this post on GitHub.