To say there's a lot of data on the Internet is an understatement. As of 2020, it's projected that the "digital universe" holds an estimated 40 trillion gigabytes or 40 zettabytes worth of information. To put this into perspective, a single zettabyte has enough data to fill data centers roughly one-fifth the size of Manhattan.

With such a vast amount of information available to analyze, it makes sense that so many tasks associated with gathering data get left to artificial intelligence. Bots can crawl through web pages at incredible speed, extracting as much relevant information as needed. And while many data scientists and marketers access and use this info in a perfectly ethical fashion, it’s an unfortunate fact that the growing presence of AI online brings with it a growing amount of stigma.

It would be easy to dismiss much of the negativity as an indirect result of Hollywood movies and sci-fi stories where AI is something to be wary of at the best of times. However, the consequence of unethical bot usage by certain web users means that there are crackdowns that affect even those who are working with data professionally and in good faith.

Web scraping remains an essential tool for many professionals, and especially AI. But what can be done about the bot-related stigma?

First, What Is Web Scraping?

For those just joining the conversation, the act of web scraping should be understood as data extraction. Although data scientists and other professionals use scraping to analyze very complex digital stacks of information, the act of copying and pasting text from a website could itself be considered a simple form of scraping.

But even if you can access every part of a website, there’s so much available information, it can take a very, very long time to gather data from just that source. For the most part, web scraping is left to AI, with humans then taking the retrieved data and thoroughly analyzing it for various purposes. But while this is a great convenience to the web scraper, website owners and onlookers are greatly concerned about the rampant use of AI in this way.

Is Web Scraping Better With Bots?

With so much information to analyze, it seems a no brainer turn to artificial intelligence (AI) to gather data. In fact, Google itself is one of the most trusted sources for providing web scraping tools to interested parties. For instance, you can use its dataset search engine to quickly access data deemed freely available for use. You can even customize your search to learn if the information is available for commercial use. All in a matter of a couple of seconds.

This wouldn’t be possible if Google AI wasn’t so incredibly efficient at examining every website within its reach for relevant data. It’s a perfect example of using AI to garner useful information for research or business in a purely ethical fashion. The speed of availability is also a testament to just how “bots” make it so easy to perform web scraping tasks.

That said, it’s hard not to ignore the implication of AI traffic becoming so commonplace, to the point of accounting for more than half of Internet traffic. 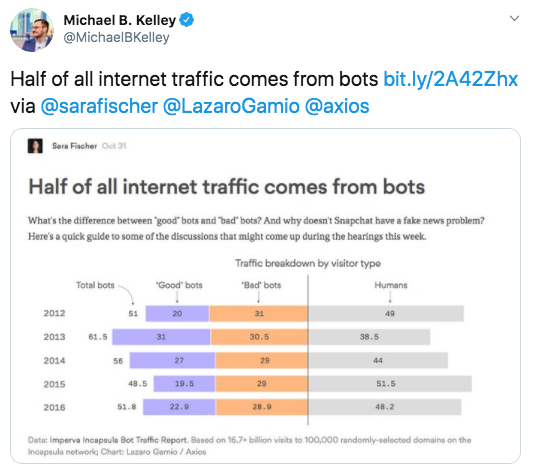 While some find that AI making up the majority of Internet traffic is worrying, the issue is made worse by having a slight majority of AI traffic being made up of “bad bots.” Even when scraping intentions are good and the approach is ethical, AI stigma feels unavoidable.

Using bots to tackle an insane amount of data is a logical step. In addition to AI, it’s important to consider other essential tools while scraping.

How Proxies Can Help

As explained here, there are multiple advantages to using proxies while web scraping, namely anonymity. For example, if you wish to study a competing brand and use the information to figure how best to improve your own company, you probably don’t want to have it known that you visited their website. In a situation like this, it’s great to use proxies to access and examine data without giving away your identity.

Before we dive further, here’s a quick refresher on the topic of proxy servers:

But why set up those restrictions in the first place? Isn’t this data freely available on the web? Yes — for human users. Here’s a typical example: price aggregators’ entire business model is built around accurate information; namely, providing the definitive answer to the question of “Where can I buy Product X for the lowest price?”

Although this is a great opportunity for customers to save money, vendors aren’t too excited about other companies snooping around in their data: aggregators’ web crawling software (often called “bots” or “spiders”) introduce additional load on the website. Therefore, it’s not uncommon for webmasters to restrict access to their websites if they suspect that the given web activity isn’t carried out by a genuine user.

Another practical use for proxies is evading a censorship ban. Residential proxies, as the name suggests, allow you to appear as a genuine user from Country X — whichever country you prefer. The need for residential proxies is simple: (suspicious) bot activity usually comes from a set of countries, so even genuine users from these countries often encounter geo-restrictions.

Additionally, when you’re trying to gather data from sources that are kept from you for political reasons, proxy usage is especially helpful. There are many ways to use proxies while web scraping but for the sake of building trust within the digital community, we suggest sticking to methods that will build brand trust and authority.

It’s true, for now, that AI outpaces the number of humans surfing the Internet. Still, there’s no telling how Internet usage will evolve in the coming years, and so there’s no reason to immediately assume this trend is irreversible or that it represents an inherently negative trend.

One of the best ways to upend the negative speech about so much AI traffic on the web is to find ways to restore a human touch to AI usage across the Internet. Additionally, it’s important to use AI in ways that build trust and doesn’t feed misplaced concerns.

As ideal as it would be to manually access website data through purely human efforts, there’s just too much information to make this a viable option. The amount of data available is practically limitless, and AI is our best means of navigating websites and analyzing their data as efficiently as possible.

For data scientists and other professionals aiming to make the most of their web scraping efforts, we strongly suggest using reliable proxies as they can protect your identity and privacy as you access the information you need for your analysis efforts.