the speed with which the boston marathon bombing suspects were identified was a remarkable sign that we’re in the age of ubiquitous photos and video of the public square, albeit at a major international event.

we’ve written a few times about privacy in the age of big data, with a focus on what happens when video can be ‘processed’ as data. in the article while you slept last night…big data, privacy and the public square ,we warned that even old video has the same potential to disrupt privacy as something shot today.

but what if that lack of privacy is what makes our streets safer?

between monday and thursday night, authorities (granted, thousands of resources) were able to put together a pictorial and video timeline of what happened along boyleston street at the boston marathon finish line. once the suspects were id’d, it was fairly easy to match those pictures with the security camera of a 7-11 that was robbed in cambridge last night and for every amateur sleuth on the internet to build a composite picture of the two brothers, tamerlan and dzhokhar tsarnaev.

social media as the source for news 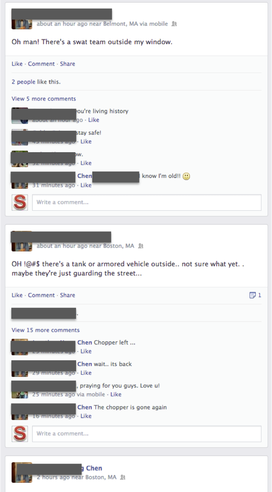 even this morning, we were seeing facebook posts from friends in watertown, massachusetts who were witnesses to the shootout that took place last night and the manhunt that is still going on in their city.

i think back to the last time a manhunt played out across the public consciousness, and it was the oj simpson slow-speed chase across los angeles. we received the most timely information from the police and media and had to decide the accuracy for ourselves.

today, we follow the boston manhunt not through the media, which struggles to keep up, or from the police with their periodic press conferences and wild rumors, but from twitter and facebook, where we know the source of the information or at least the reliability of the social network.

this gives us pause when we consider the privacy ‘scorecard’ when it comes to video big data, social media and the future of safety and security in society. the question that is left open is how to have the benefits of constant public surveillance (private or public as this case shows) and the ability to correlate images and information at amazing speeds. we want the benefits and we’d like to avoid the things that embarrass us personally.