our research labs are humming at full speed. with the recent injection of capital , we can only warrant that the pace at which we keep innovating will only increase. part of the research we conduct is related to gc optimizations. while dealing with the problems in this interesting domain, we thought to share some insights to gc algorithm usage.

for this we conducted a study on how often a particular gc algorithm is being used. the results are somewhat surprising. let me start with the background of the data – we had access to data from 84,936 sessions representing 2670 different environments to use in the study. 13% of the environments had explicitly specified a gc algorithm. the rest left the decision to the jvm. so out of the 11,062 sessions with explicit gc algorithm, we were able to distinguish six different gc algorithms: 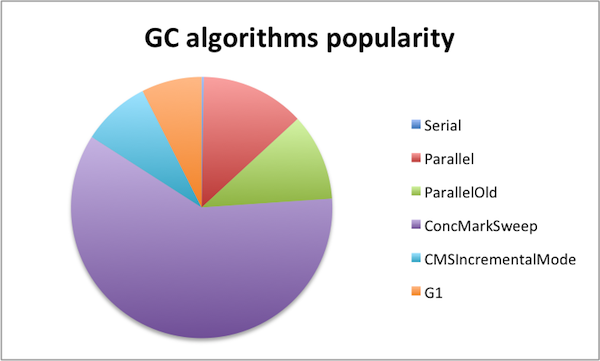 before understanding the details about the gc algorithm usage, we should stop for a minute and try to understand why 87% of the runs are missing from the pie chart above. in our opinion, this is a symptom of two different underlying reasons

but lets go back to the 13% who have explicitly specified the gc algorithm in the configuration. it starts with the good old serial mode, which, by no surprise has so small user base that it is barely visible from the diagram above. indeed, just 31 environments were sure this is the best gc algorithm and had specified this explicitly. considering that most of the platforms today are running on multi-core machines you should not be surprised – when you have several cores at your disposal, the switch from serial mode is almost always recommended.

the rest of the configuration can be divided into three groups – parallel, concurrent and g1. the winner is clear – concurrent mark and sweep algorithms combined represent more than two thirds of the samples. but let us look at the results in more depth.

parallel and parallelold modes are roughly in the same neighbourhood with 1,422 and 1,193 samples. it should not be a surprise – if you have decided that parallel mode is suitable for your young generation then more often than not the same algorithm for the old generation is also performing well. another interesting aspect in parallel modes is that – as seen from the above, the parallel mode is default on the most common platforms, so the lack of explicit specification does not imply it is less popular than the alternatives.

but our biggest surprise was related to the g1 adoption rate. 826 environments were running with g1 as the garbage collection algorithm. based on our experience, independent of whether you are after throughput or latency, the g1 tends to perform worse than cms. maybe the selection of test cases we have had access to has been poor, but at the moment we consider g1 to need more time to be actually delivering on its promises. so if you are a happy g1 user, maybe you can share your experience with us?

hopefully we were able to give you some food for thought. i can only promise that more on the topic is coming, so stay tuned and subscribe to the rss feed!