HandlerSocket is included with MariaDB and acts like a simple NoSQL interface to InnoDB, XtraDB and Spider, and I will describe it a bit more in this and a few upcoming blogs.

So, what is HandlerSocket? Adam Donnison wrote a great blog on how to get started with it, but if you are developing MariaDB applications using C, C++, PHP or Java what good does HandlerSocket do you?

HandlerSocket in itself is a MariaDB plugin, of a type that is not that common as is a daemon plugin. Adam shows in his blog how to enable it and install it, so I will not cover that here. Instead I will describe what it does, and doesn't do.

Inside MariaDB there is an internal "handler" API which is used as an interface to the MariaDB Storage Engines, although not all engines supports this interface. MariaDB then has a means to "bypass" the SQL layer and access the Handler interface directly, and this is done by using the HANDLER commands with MariaDB. Note that we are not talking about a different API to uise the handler commands, instead they are executed using the same SQL interface as you are used it's, it's just that you use a different set of commands. One limitation of these commands is that they only allow reads, even though the internal Handler interface supports writes as well as reads.

In the above example, I guess this is just overcomplication something basically simple, as all this does is the same as 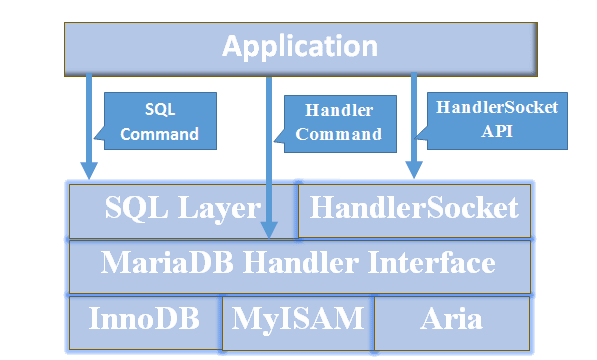 All this brings up three questions:

The answer to the first two questions then is the Handler Socket plugin, which was the whole deal with this blog, as this use a separate, very simple, Protocol and allows writes! For the third question, this is whjere I come in, I have done some simple INSERT style benchmarks using HandlerSocket, and I have some results for you in my next blog. So don't touch that dial, I'll be right back!