Digital signatures are at the heart of many of the applications and technologies we use on a daily basis, including Bitcoin and, Secure Socket Layer (SSL), and Transport Layer Security (TLS). Not only does a digital signature authenticate an originator, ensuring that a message originates from the party that claimed to have sent it (similar to a handwritten signature), but it also provides a greater degree of security: integrity. Using a digital signature, we can ensure that the contents of a message have not changed during their transmission. This also has the corollary effect of ensuring non-repudiation, whereby an originator cannot claim that a signed message did not originate from him or her (i.e. that the signature is not his or hers).

Throughout this article, we will assume a basic understanding of security, with a goal of sending a given message between two parties (Alice and Bob) over an insecure communication channel (one in which some agent, Eve, is looking to tamper with transmissions). To drive our discussion, we will first look at the two main components in digital signatures: (1) cryptographic hashing and (2) public-key encryption. With a solid understanding of the prerequisites, we will then thoroughly define the process of generating and verifying a digital signature.

In general, a hash is a mathematical function that maps an arbitrarily-sized input into a fixed-sized output. Intuitively, that means that we can define some function, d = ƒ(m), where the input to the function, m, is called the message and the output to the function, d, is called the digest. Given some arbitrarily-sized message, we know that our digest will always be of a fixed length. For example, we can create a function, d = ƒ32(m), that always results in a 32-bit digest: Regardless of the size of the input message (such as 1 bit, 64 bits, 256 bits, 5,000 bits, etc.), this hash function will always produce a 32-bit digest. This principle is illustrated in the figure below. 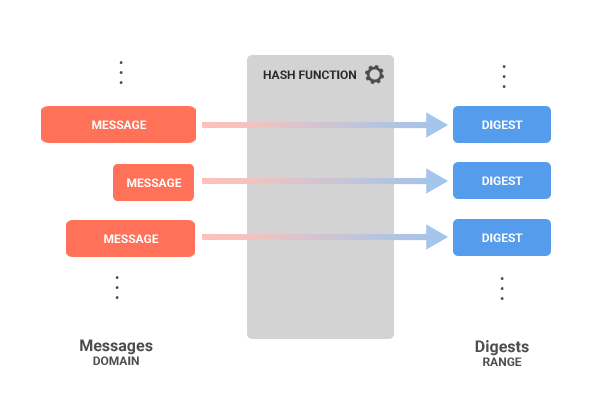 The constraints required for a cryptographic hash function provide some realistic bounds on our theoretical hash function. In the general case, we could devise a hash function, albeit impractical, that maps all possible messages to the value 1, thus allowing for an infinite message set. In the case of a cryptographic hash function, the digest must be deterministic and collision resistant. Therefore, when the same message is fed into the hash function, the same digest is always produced, no matter how many times the process is repeated. Furthermore, all digests must be unique in the sense that given two different messages, the same digest must never be produced.

Since our digest length is limited, there is no feasible way to produce a completely collision-resistant cryptographic hash function. Instead, we make the digest length sufficiently long as to make the chance of a collision highly unlikely. For example, if we define our digest length to be 256 bits, we can have 1.18e77 possible digests. Thus, assuming a uniform distribution, there is an 8.64e-76% chance that two messages will result in the same digest.

Lastly, the function must produce digests that are sufficiently dispersed, where a small change in a message results in a largely different digest. For example, if we hashed the contents of a book, adding a period to the end of the book should result in a digest that is wholly unrecognizable from the digest generated from the original contents of the book. Put simply, even the most minuscule changes to a message should result in a large change to the digest.

When looking to secure information, encryption is commonly the appropriate technique, but encryption can provide much more than simple obfuscation. Broadly, encryption is the process of taking some message (called plaintext) accompanied by some key and producing encrypted cyphertext that cannot be decrypted unless the ciphertext and a key (possibly the same key or a different key) is fed into a decryptor. 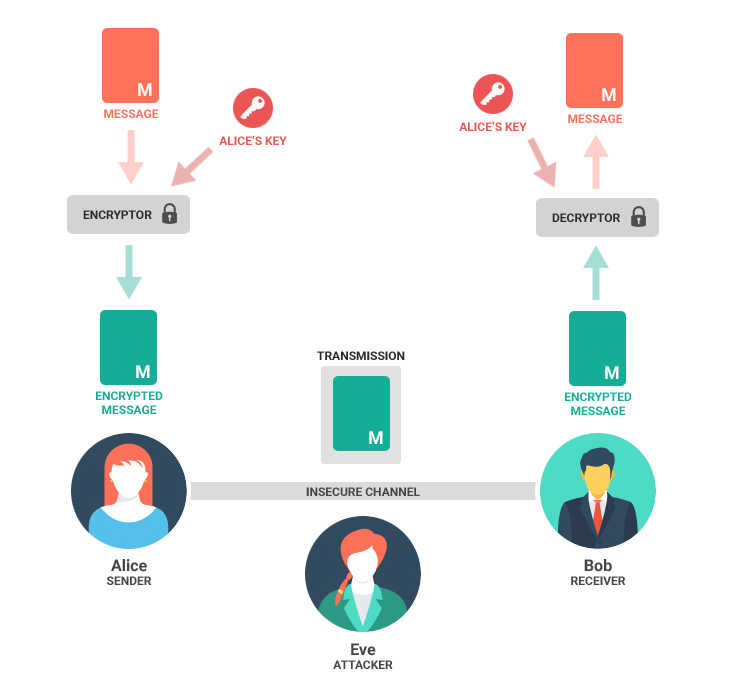 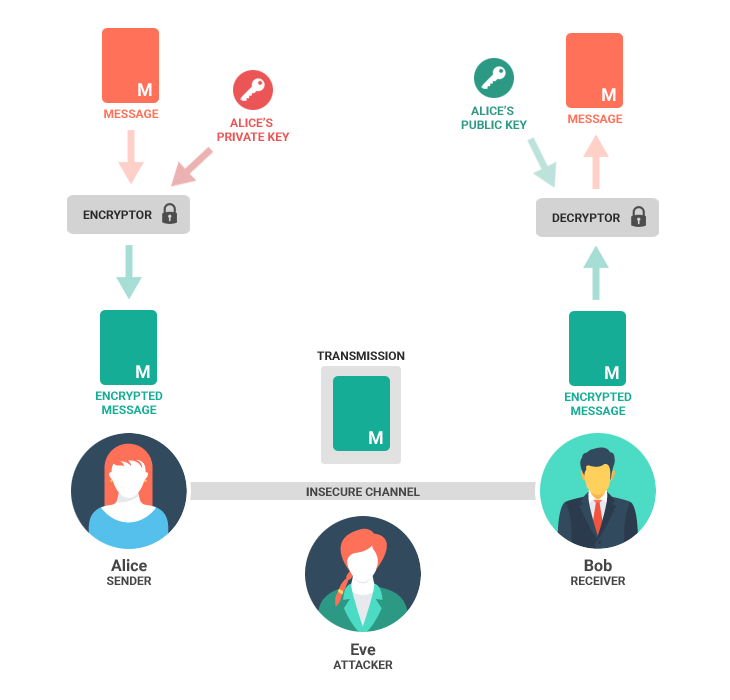 In the case of digital signatures, we have two main goals: (1) ensure that the original message was not changed and (2) ensure that message was actually sent by the sender. To accomplish this, we initiate a two-step process, combining our knowledge of cryptographic hashing and public-key encryption. First, we cryptographically hash our message, creating a digest associated with the message. If the message changes, we know that the digest should change. 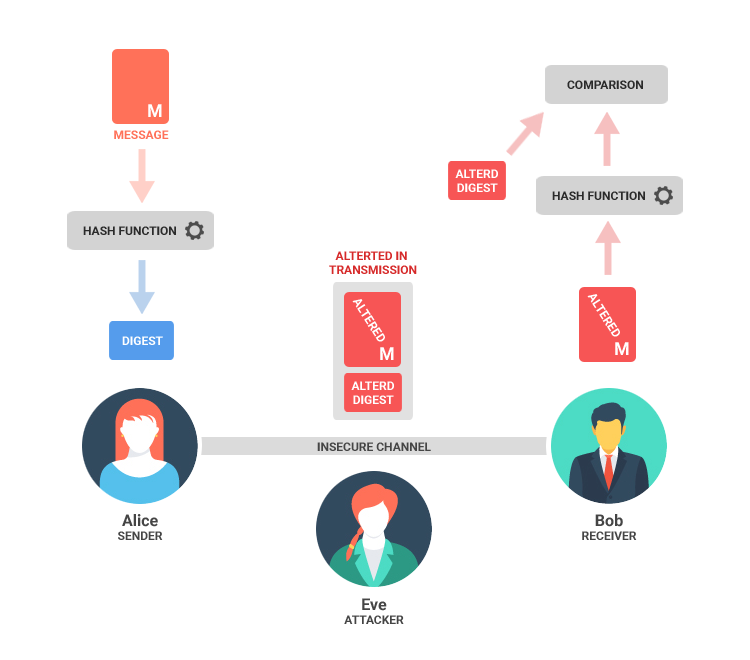 As stated before, in order to determine if the ciphertext was successfully decrypted, we need a known plaintext value to which we can compare our decrypted ciphertext. In the case of digital signatures, the known value is the expected digest of the message. If we do not obtain the expected digest, we know that the message was either changed, the encrypted digest was tampered with, or the message was not sent by the claimed sender (i.e. the digest was not encrypted using the private key of the sender). In any of these cases, we know that the message is invalid.

Coming full circle, we end up with a few steps that must be performed by the sender and receiver to ensure the validity of a digital signature. Namely, the sender must:

Next, the receiver must:

This process is depicted in the following figure. 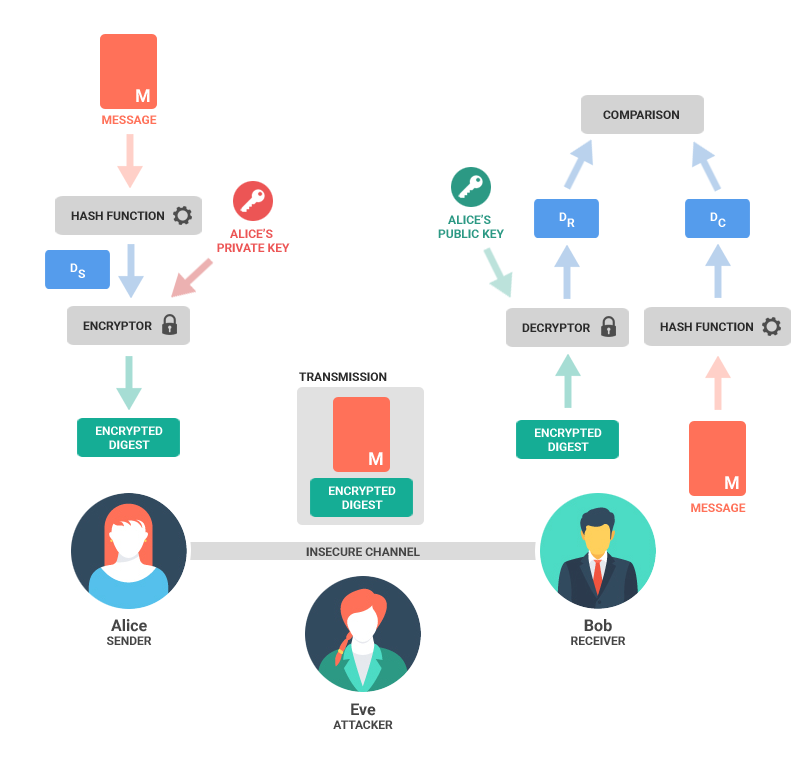 Using this technique, we can ensure (with a high degree of confidence) that any message transmitted between Alice and Bob cannot be tampered with by Eve without Bob knowing.

Given the security-conscience world in which we live, encryption, cryptography, and other assurance techniques are becoming a prerequisite for software engineering. Particularly, digital signatures are used throughout everyday applications and technologies to ensure the integrity and security of systems, including the blockchain used by Bitcoin, the underlying security layers utilized by the Secure Hypertext Transfer Protocol (HTTPS), and the certificates used by browsers. Although some of these technologies are very complex, understanding basic principles, such as cryptographic hashing, public-key encryption, and digital signatures, breaks these intricate systems into composites of simple ideas and helps to ensure that we build in security at every level of our systems.