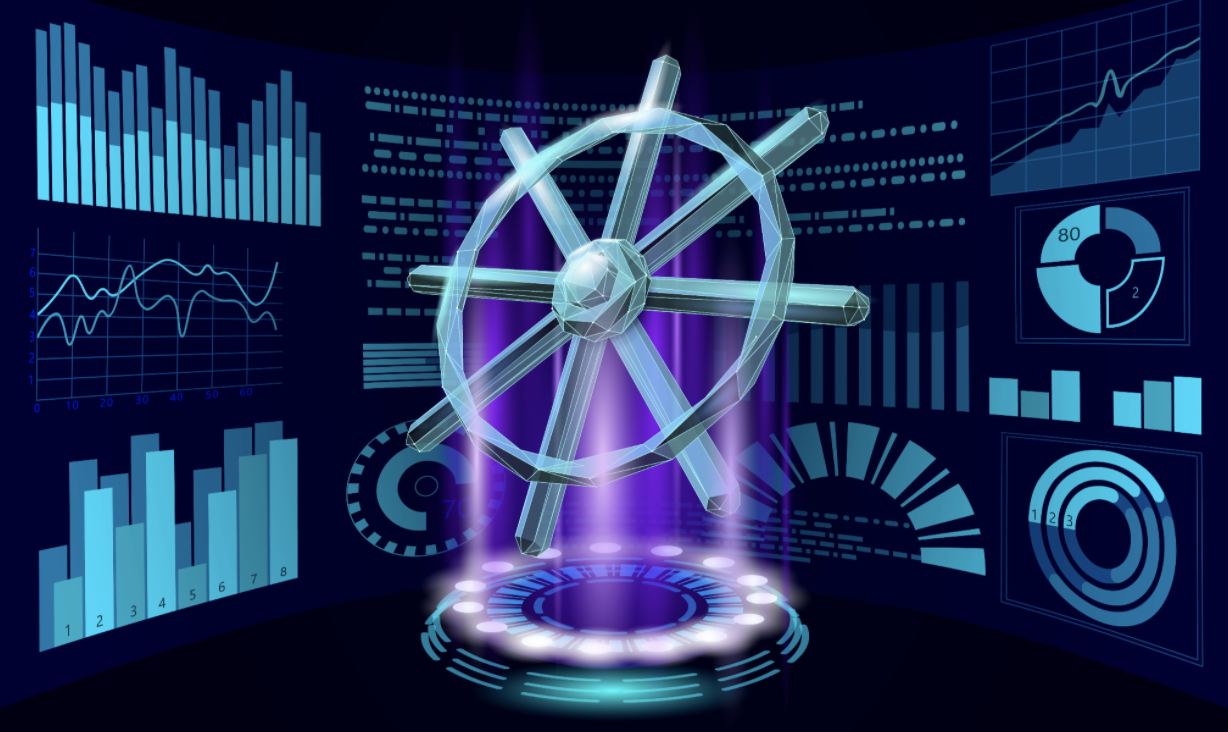 Kubernetes is popular due to its capability to deploy new apps at a faster pace. Thanks to "Infrastructure as data" (specifically, YAML), today you can express all your Kubernetes resources such as Pods, Deployments, Services, Volumes, etc., in a YAML file. These default objects make it much easier for DevOps and SRE engineers to fully express their workloads without the need to learn how to write code in a programming language like Python, Java, or Ruby.

Kubernetes is designed for automation. Out of the box, you get lots of built-in automation from the core of Kubernetes. It can speed up your development process by making easy, automated deployments, updates (rolling update), and by managing your apps and services with almost zero downtime. However, Kubernetes can’t automate the process natively for stateful applications. For example, say you have a stateful workload, such as a database application, running on several nodes. If a majority of nodes go down, you’ll need to reload the database from a specific snapshot following specific steps. Using existing default objects, types, and controllers in Kubernetes, this would be impossible to achieve.

Think of scaling nodes up, upgrading to a new version, or disaster recovery for your stateful application — these kinds of operations often need very specific steps and typically require manual intervention. Kubernetes cannot know all about every stateful, complex, clustered application. It, on its own, does not know the configuration values for, say, a Redis database cluster, with its arranged memberships and stateful, persistent storage. Additionally, scaling stateful applications in Kubernetes is not an easy task and requires manual intervention.

In the example above, a Deployment object named nginx-deployment is created under a namespace “web,” indicated by the .metadata.name field. It creates two replicated Pods, indicated by the .spec.replicas field. The .spec.selector field defines how the Deployment finds which Pods to manage. In this case, you select a label that is defined in the Pod template (app: Nginx). The template field contains the following subfields: the Pods are labeled app: nginx using the .metadata.labels field and the Pod template's specification indicates that the Pods run one container, Nginx, which runs the Nginx Docker Hub image at version 1.14.2. Finally, it creates one container and names it Nginx.

Run the command below to create the Deployment resource:

Let us verify if the Deployment was created successfully by running the following command:

The example above shows the name of the Deployment in the namespace. It also displays how many replicas of the application are available to your users. You can also see that the number of desired replicas that have been updated to achieve the desired state is 2. 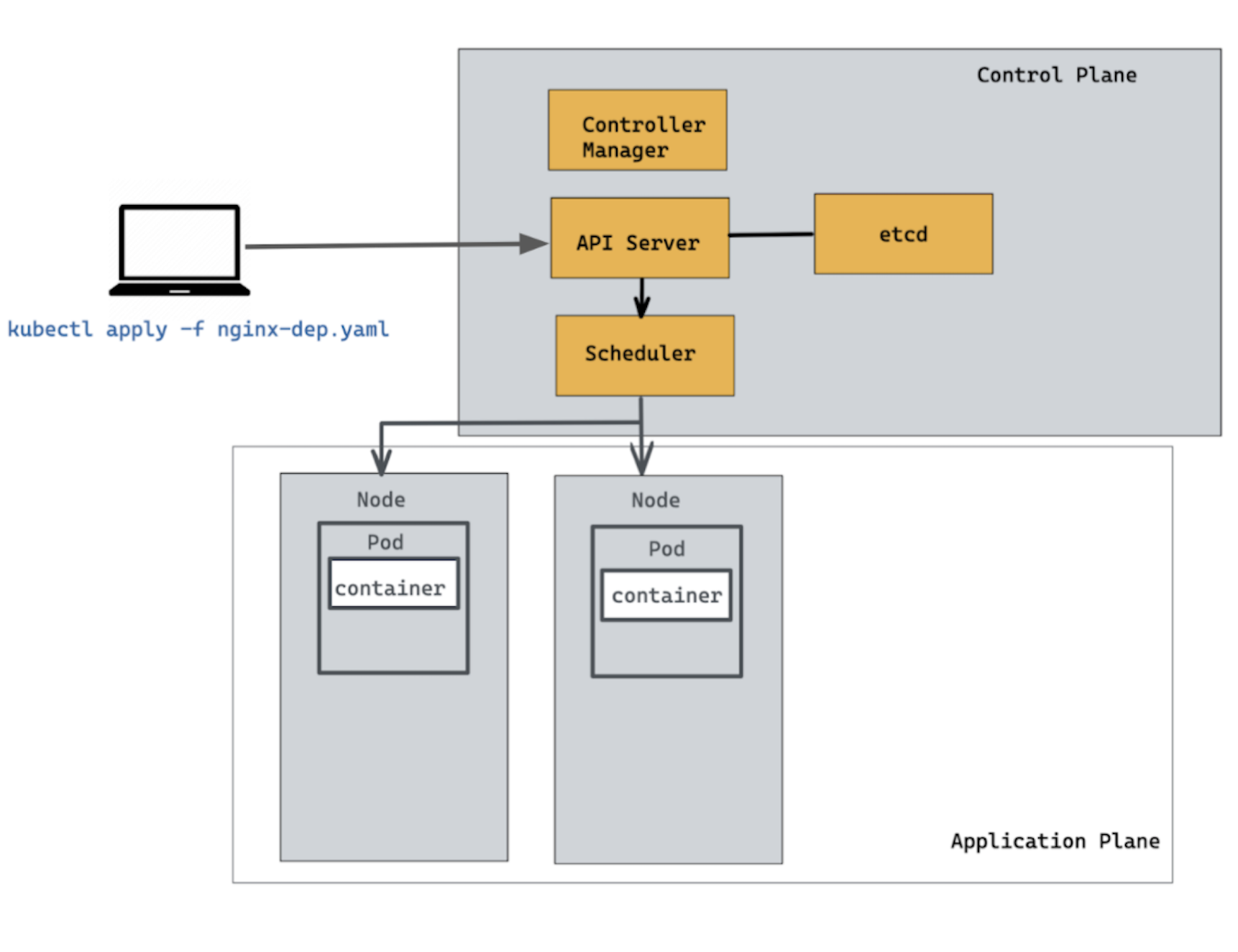 You can run the kubectl describe command to get detailed information on deployment resources. To show details of a specific resource or group of resources:

A Deployment is responsible for keeping a set of Pods running, but it’s equally important to expose an interface to these Pods so that the other external processes can access them. That’s where the Service resource comes in. The Service resource lets you expose an application running in Pods to be reachable from outside your cluster. Let us create a Service resource definition as shown below:

The above YAML specification creates a new Service object named "nginx-service," which targets TCP port 80 on any Pod with the app=nginx label. 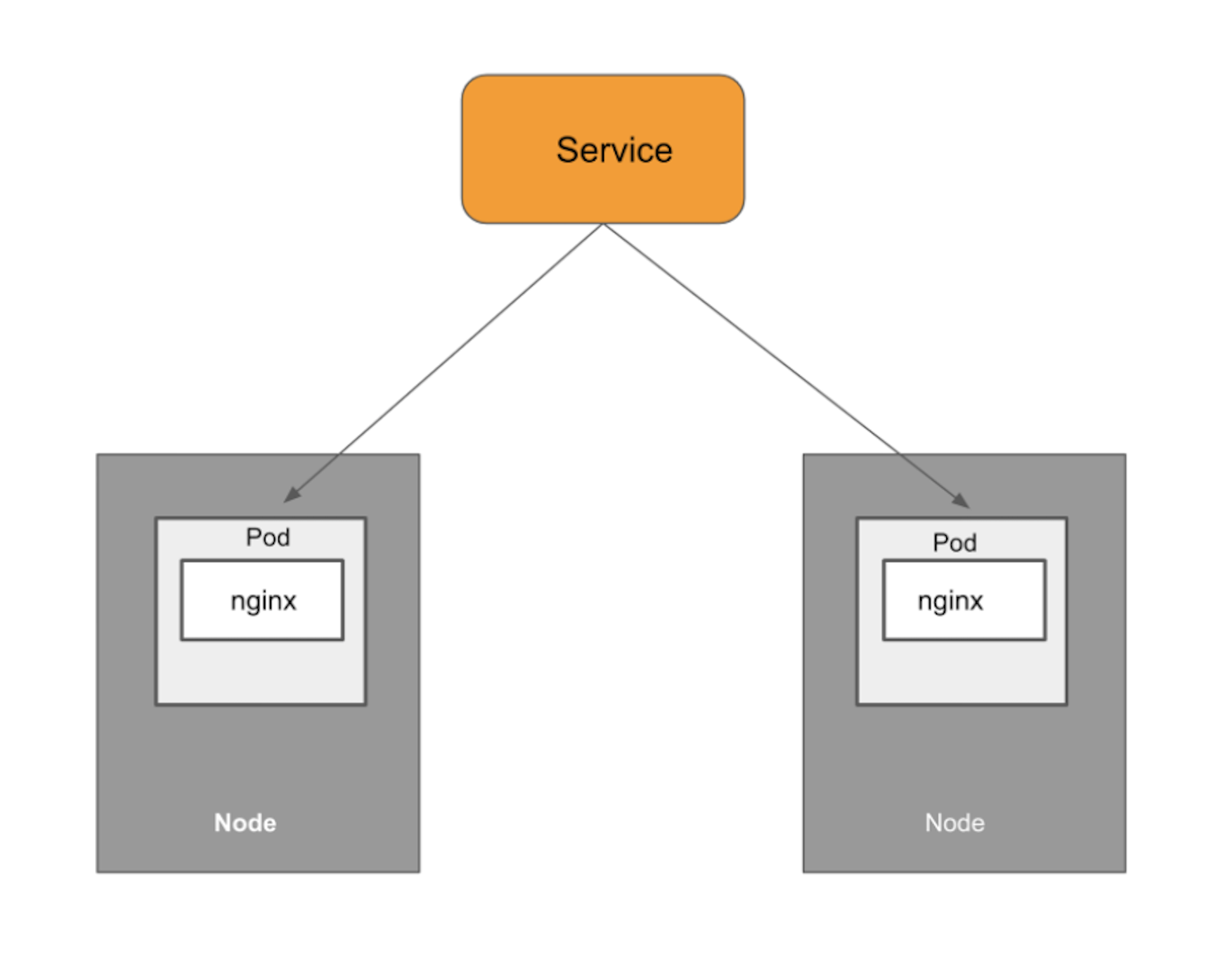 Let’s scale the Deployment to 4 replicas. We are going to use the kubectl scale command, followed by the deployment type, name, and desired number of instances. The output is similar to this:

The change was applied, and we have 4 instances of the application available. Next, let’s check if the number of Pods changed. There should now be 4 Pods running in the cluster (as shown in the diagram below): 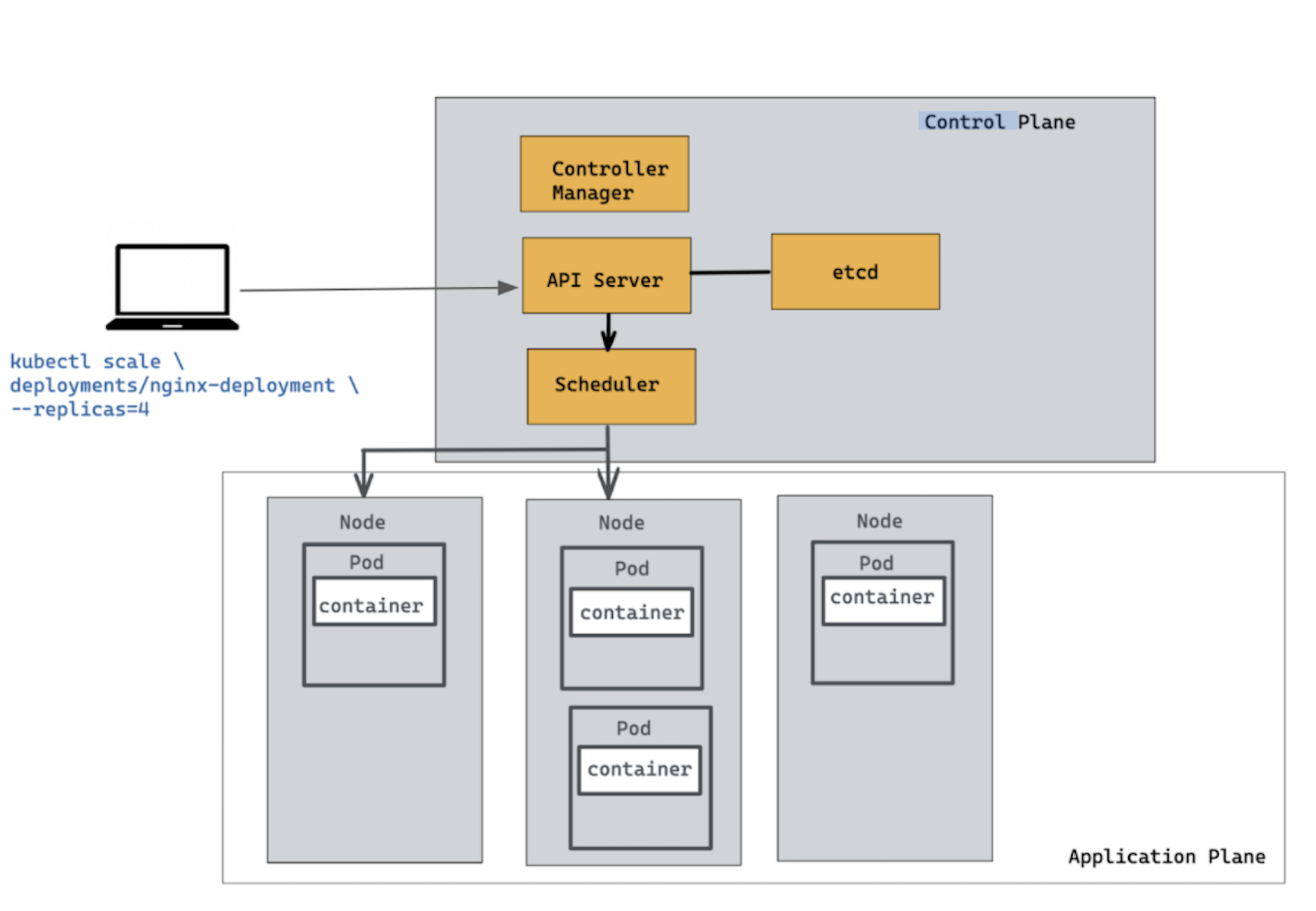 There are 4 Pods, with different IP addresses. The change was registered in the Deployment events log.

Deleting one of the webserver Pods triggers work in the control plane to restore the desired state of four replicas. Kubernetes starts a new Pod to replace the deleted ones. In this excerpt, the replacement Pod shows a STATUS of ContainerCreating:

You will notice that the Nginx static web server is interchangeable with any other replica, or with a new Pod that replaces one of the replicas. It doesn’t store data or maintain the state in any way. Kubernetes doesn’t need to make any special arrangements to replace a failed Pod or to scale the application by adding or removing replicas of the server. Now you might be thinking, what if you want to store the state of the application? Great question.

Scaling stateless applications in Kubernetes is easy but it’s not the same case for stateful applications. Stateful applications require manual intervention. Bringing Pods up and down is not that simple. Each Node has an identity and some data attached to it. Removing a Pod means losing its data and disrupting the system. 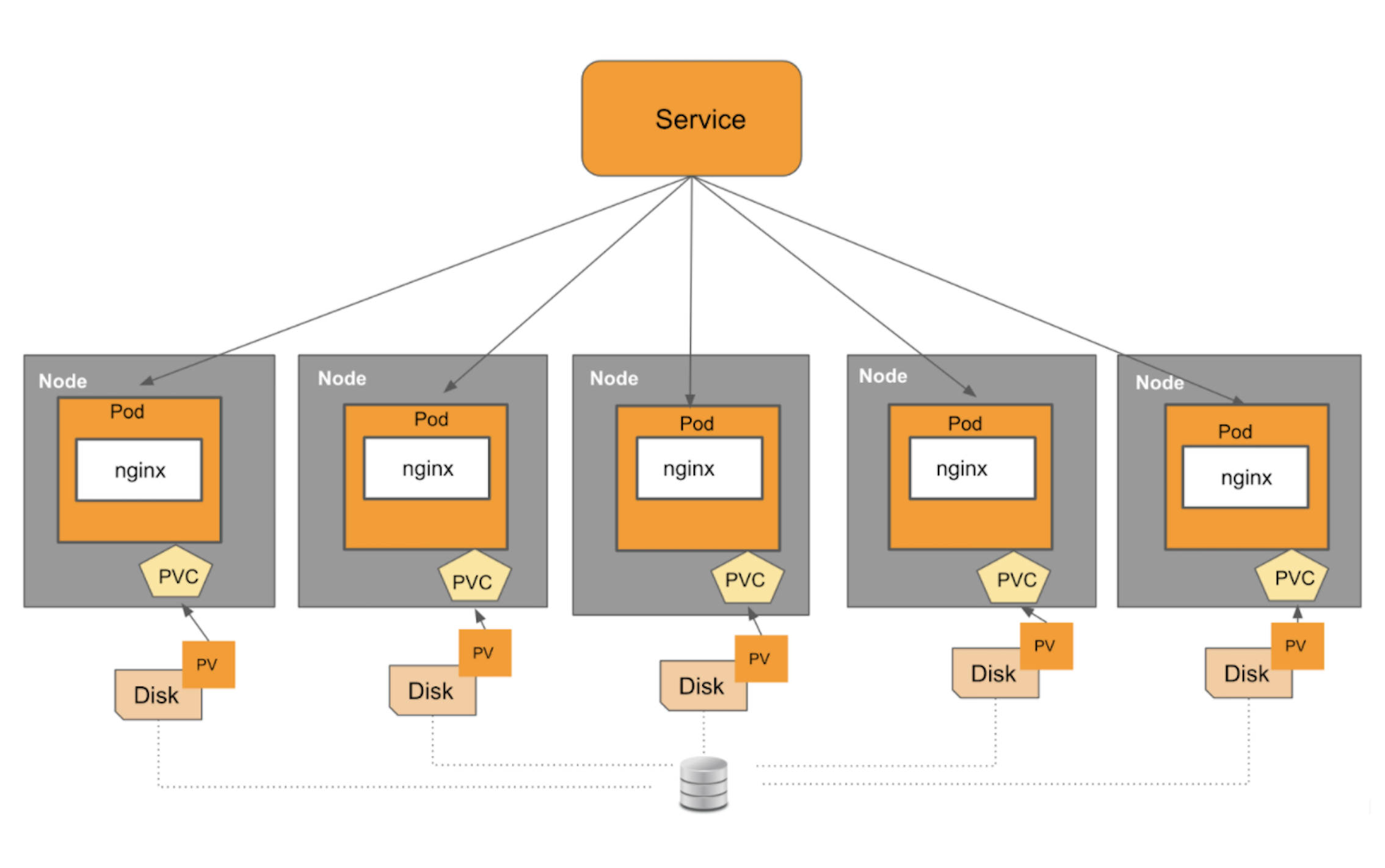 Consider a Kubernetes cluster with 6 worker Nodes hosting an Nginx web application connected to a persistent volume as shown above. Here is the snippet of the StatefulSets YAML file:

Kubernetes makes physical storage devices available to your cluster in the form of objects called Persistent Volumes. Each of these Persistent Volumes is consumed by a Kubernetes Pod by issuing a PersistentVolumeClaim object, also known as PVC. A PVC object lets Pods use storage from Persistent Volumes. Imagine a scenario in which we want to downscale a cluster from 5 Nodes to 3 Nodes. Suddenly removing 2 Nodes at once is a potentially destructive operation. This might lead to the loss of all copies of the data. A better way to handle Node removal would be to first migrate data from the Node to be removed to other Nodes in the system before performing the actual Pod deletion.

It is important to note that the StatefulSet controller is necessarily generic and cannot possibly know about every possible way to manage data migration and replication. In practice, however, StatefulSets are rarely enough to handle complex, distributed stateful workload systems in production environments.

Now the question is, how to solve this problem? Enter Operators. Operators were developed to handle the sophisticated, stateful applications that the default Kubernetes controllers aren’t able to handle. While Kubernetes controllers like StatefulSets are ideal for deploying, maintaining, and scaling simple stateless applications, they are not equipped to handle access to stateful resources, or to upgrade, resize, and backup more elaborate clustered applications such as databases. A Kubernetes Operator fills in the gaps between the capabilities and automation provided by Kubernetes and how your software uses Kubernetes for automation of tasks relevant to your software. 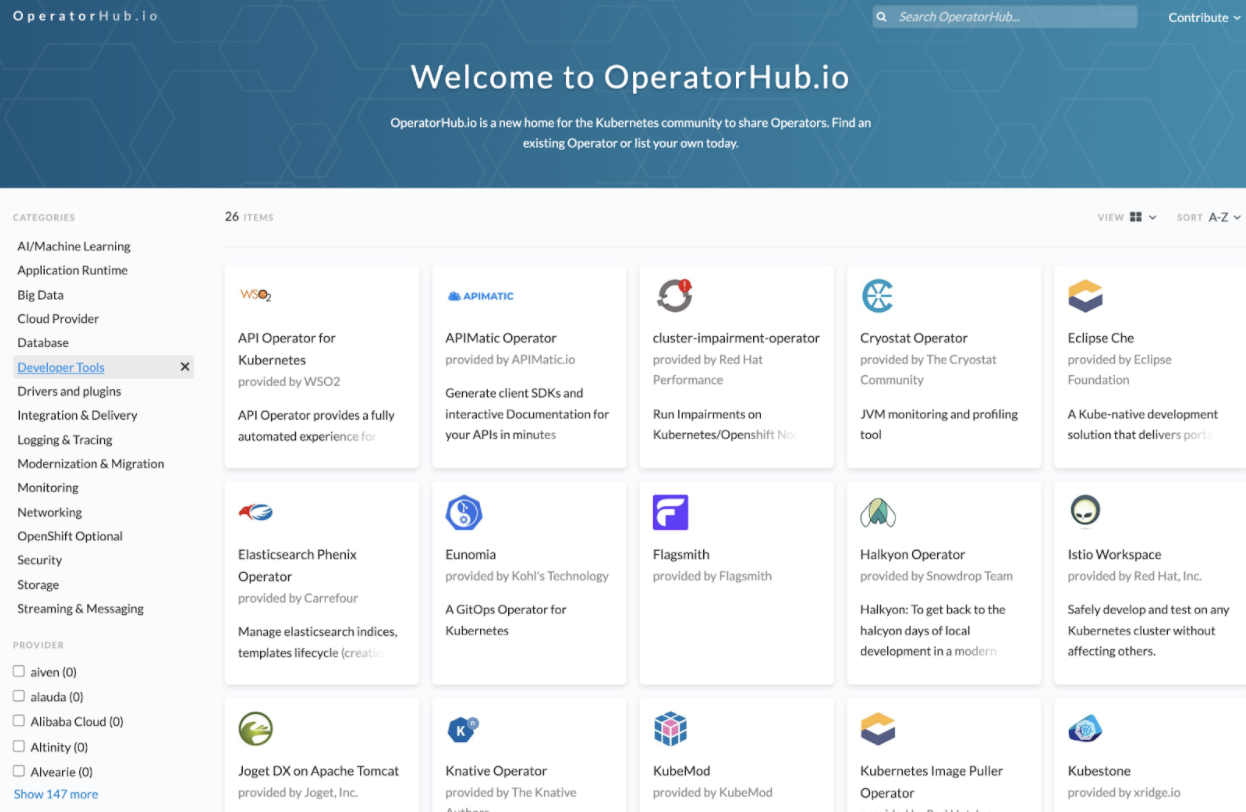 Below are a few examples of popular Kubernetes Operators and their functions and capabilities:

How Does Operator Work?

Operators work by extending the Kubernetes control plane and API. Operators allow you to define a Custom Controller that watches your application and performs custom tasks based on its state. The application you want to watch is usually defined in Kubernetes as a new object: a Custom Resource (CR) that has its own YAML spec and object type that is well understood by the API server. That way, you can define any specific criteria in the custom spec to watch out for, and reconcile the instance when it doesn’t match the spec. The way an Operator’s controller reconciles against a spec is very similar to native Kubernetes controllers, though it is using mostly custom components.

What Is the Redis Enterprise Operator?

How Does the Redis Enterprise Operator Work?

This is how it works:

Consider the YAML file below:

If you change the number of nodes to 5, the Operator talks to StatefulSets and changes the number of replicas from 3 to 5. Once that happens, Kubernetes will take over and bootstrap new Nodes one at a time, deploying Pods accordingly. As each becomes ready, the new Nodes join the cluster and become available to Redis Enterprise Cluster. 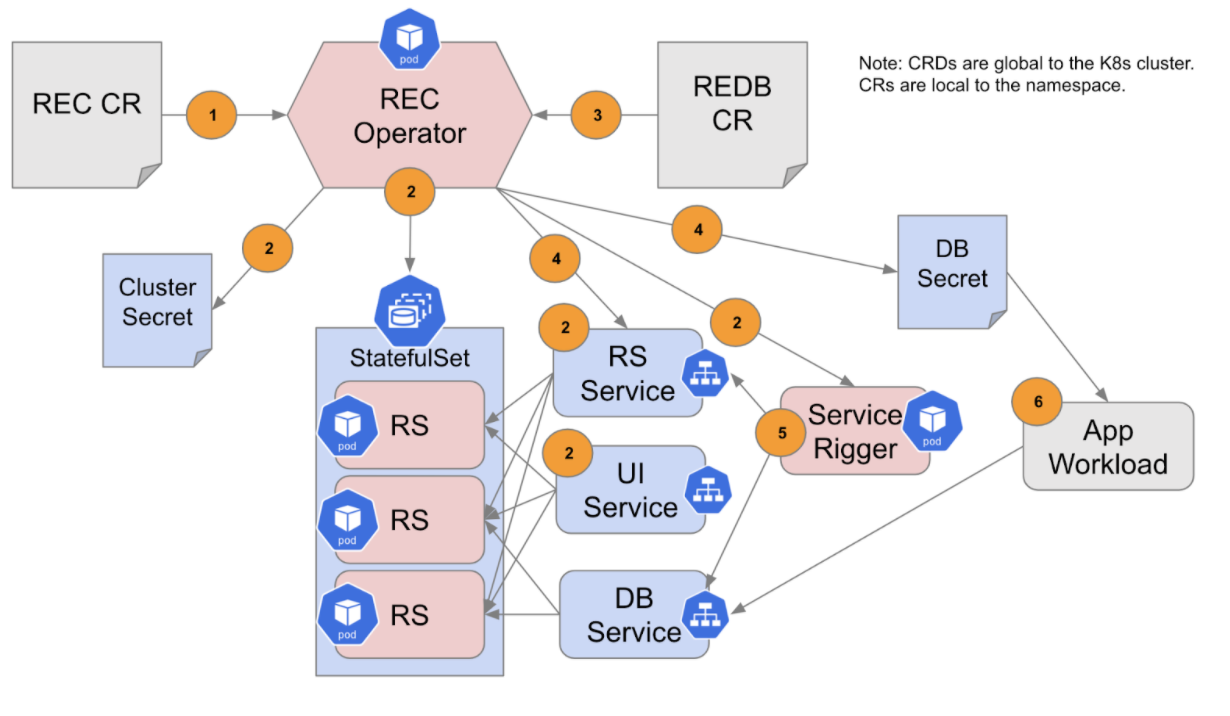 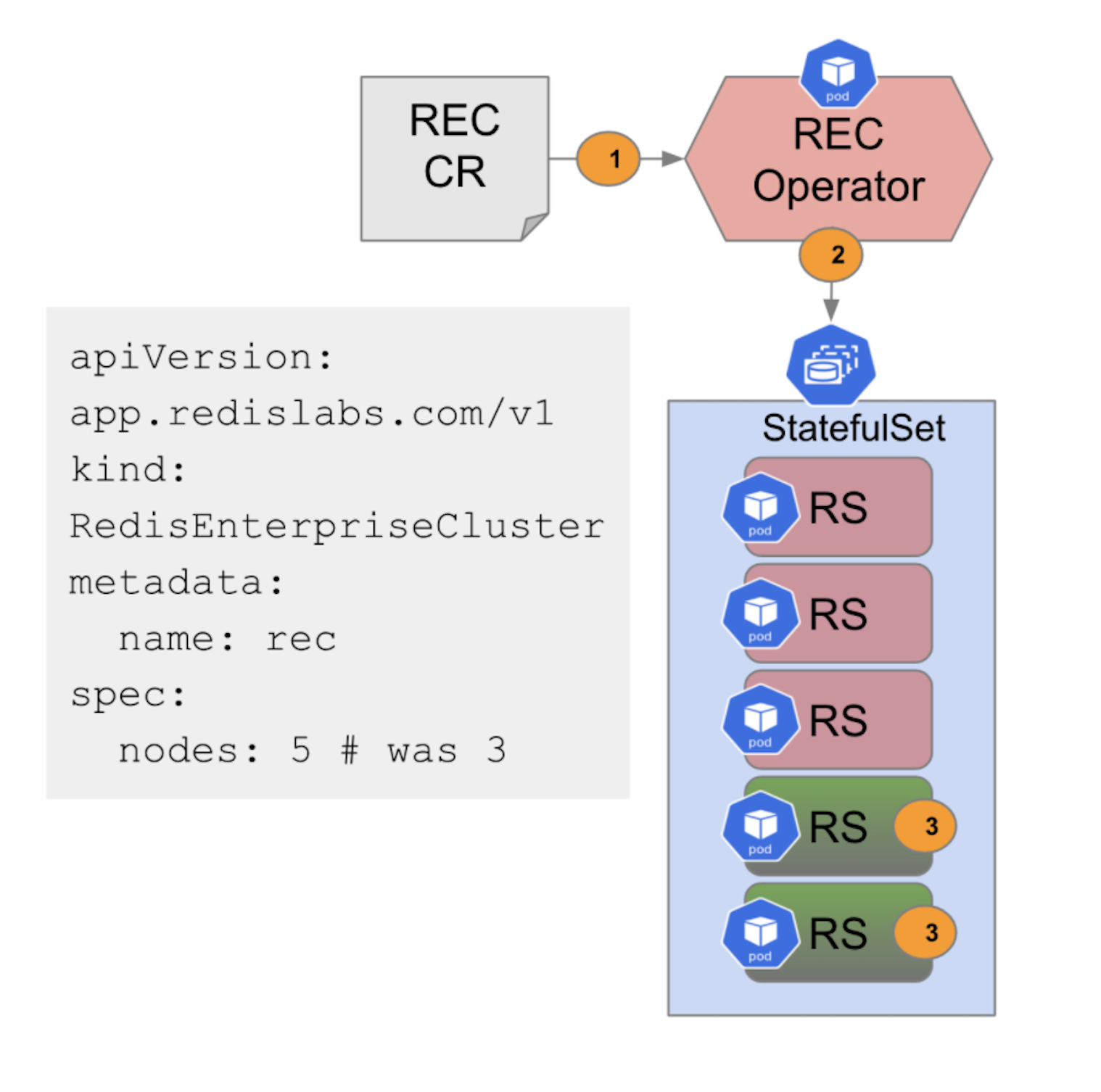 In order to create a database, the Operator discovers the resources, talks to the cluster RestAPI, and then creates the database. The server talks to the API and discovers it. The DB creates a Redis database service endpoint for that database and that will be available.

In the next tutorial, you will learn how to get started with the Redis Enterprise Kubernetes Operator from scratch, including how to perform non-trivial tasks such as backup, restore, horizontal scaling, and much more. Stay tuned!

Published at DZone with permission of Ajeet Raina. See the original article here.