It is considered in IT world that customers can completely rely on their technology partners to get their products successfully delivered but probably they have never tried to conduct their own research on the stacks, technologies, or tools required for their projects. In this article, you will learn what is the difference between React and Angular and how to make your own choice.

542 Angular jobs are currently offered on Indeed in the United States. Surely, the prime advantage of Angular is its popularity. It could be argued that it is Google that affected the way7 Angular is treated. However, the first version of Angular has quickly become popular because those developers who came from other development environments found there a familiar MVC pattern for building single-page applications (SPAs). After upgrading AngularJS and modifying some of its features, the popularity of the framework skyrocketed. And there is no wonder that today the IT market has a serious demand for Angular developers. Moreover, it is one of the few frameworks which provides a set of rich possibilities and components for creating user interfaces.

Whereas Angular offers the possibility to develop across platforms, a lot of developers who know this framework quite superficially think that it focuses on the creation of user interfaces or SPAs only and does not meet the needs of those working on larger projects.

This misinterpretation of the framework’s features can lead to the complexity of project support and reduce the interest of developers in TypeScript, the language on which the framework was written. 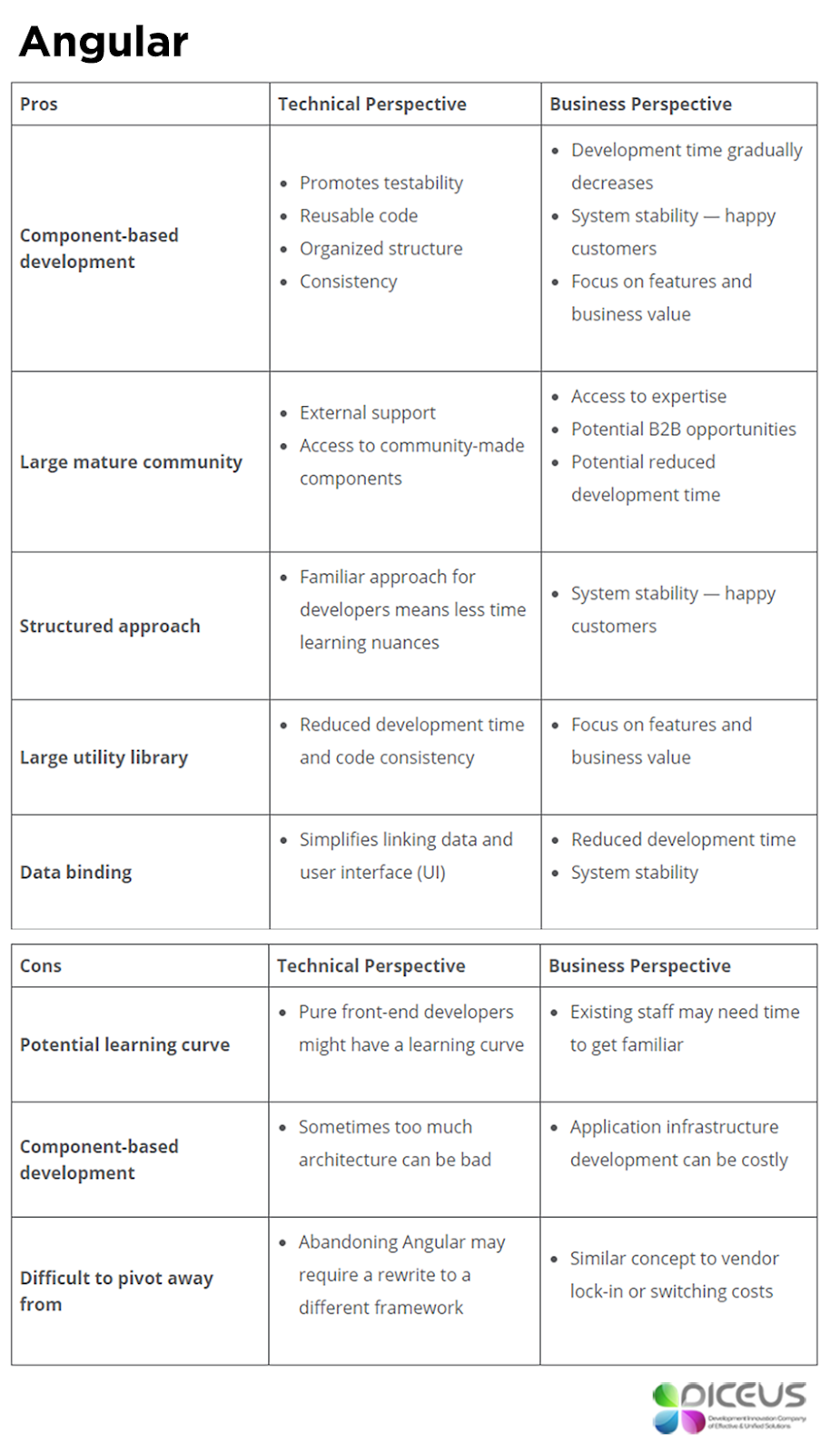 Why Is Angular Worth Selecting as a Framework for Web Development?

There are at least three cases when you may confidently choose Angular for your project.

Angular 2+ is a perfect fit if you need specialists that are easy to find and know stacks outside the Angular ecosystem as well. However, note that AngularJS differs greatly from the current version of the framework. So, you have to take the skills and experience of the developers into account when choosing the right candidates for your team.

Another case when the use of Angular is applicable is if your web application architecture utilizes the MVC pattern.

If you like a Material Google UX approach to design then a set of Angular Material components is a fast, simple, and reliable way to implement this approach.

The main advantage of React and Redux is their relative simplicity and that they are focused on one task, the development of interfaces. We can say that both libraries are good for doing what is expected of them. Most developers realize the benefits of architecture based on a one-way stream of data, and how this approach can simplify applications with complex user interfaces.

Among the biggest disadvantages of React and Redux is what these frameworks can’t offer. Thus, to create a sophisticated web application, you will need to use a lot of other technologies. As soon as you leave the basic functions of React and Redux aside, you will come up with a certain number of opinions about "correct" tools with countless templates, which are sometimes easy to integrate into your application, and sometimes not.

React and Redux are libraries which focus on the narrow range of specialized tasks. Teams with insufficient experience can easily develop some products that can’t be supported and maintained. Even experienced developers may find out that a lack of clear architectural planning or strict rules at the beginning of the development cycle can affect the project in the future. 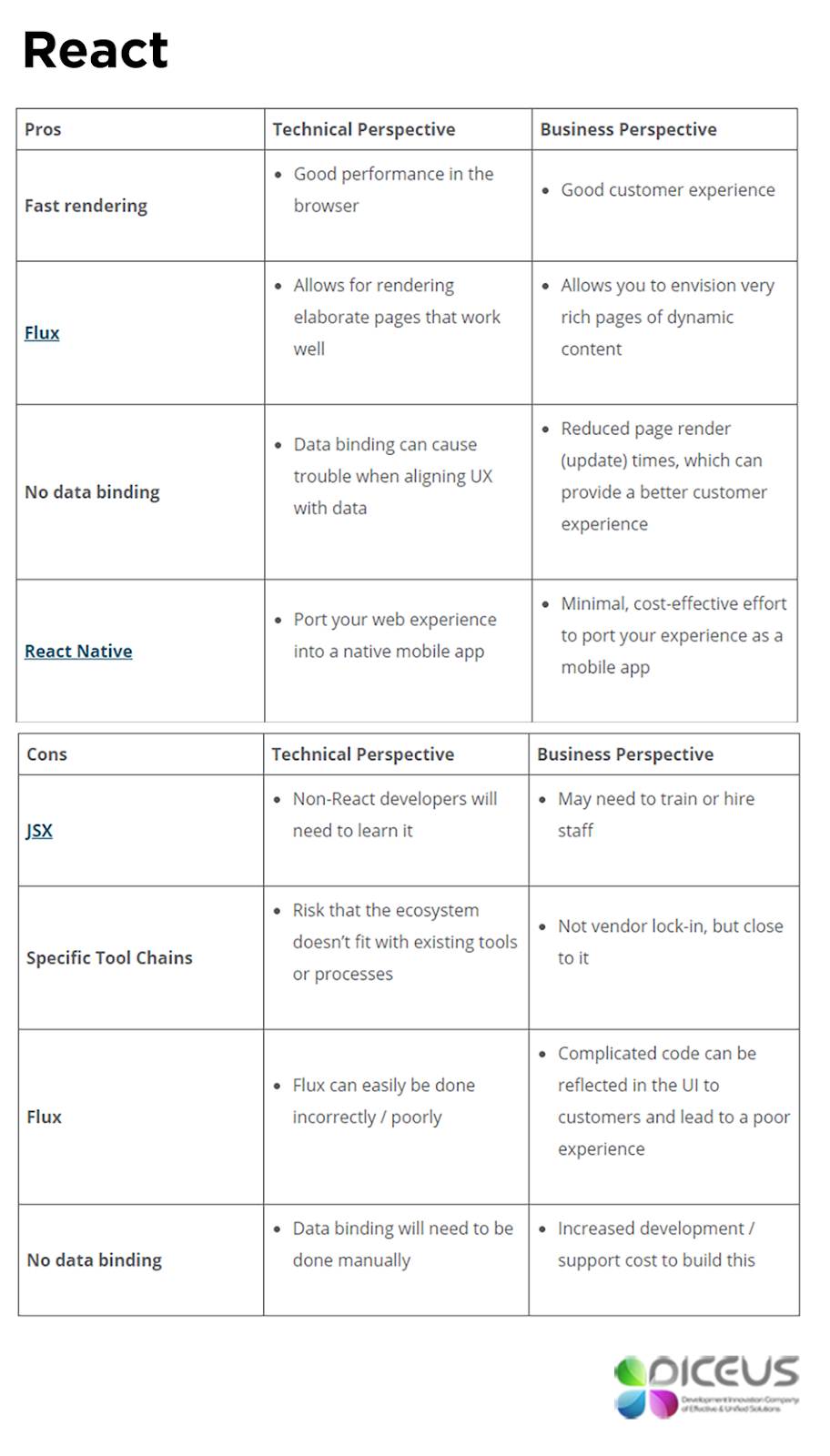 Why Is React Worth Choosing for Web Development?

If you'd prefer good libraries rather than some comprehensive framework, then, feel free to use React + Redux. In addition, you should be realistic about your team and organization, not only at the initial development stage but also while taking into account the long-term support of the application.