DevOps has captured a significant position in the IT world and has become a critical part of software engineering methodology. DevOps involves changes in process and culture. Many organizations face the difficulty of managing workflows due to hand-offs between development and operations stages while managing Continuous Integration and Continuous Delivery. By integrating participating tools, it is possible to automate process flow and implement DevOps successfully.

Well, as the name suggests, DevOps forms the union of two different sub-disciplines – Dev and Ops. While the term Dev refers to the software development in general, it is actually used on a much broader scale covering a vast network of people who assist in developing a product including Product Managers, the software developers, QA engineers, and others. On the other hand, Ops is the indicating term for the system engineers, network engineers, system administrators, DBAs, and the whole contingent staff who work on the complete IT infrastructure and operations. Thus, DevOps, in short, deals with collaboration and communications between software developers, QAs, and IT operations.

To be precise, DevOps is a software development practice where operations engineers, development engineers, and QA participate together in the entire service lifecycle of the product from the design stage through the development process to production or implementation support. 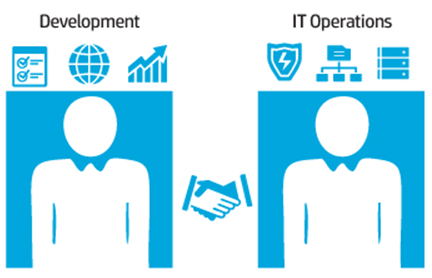 A big reason for the evolution of DevOps is that the knowledge gap between software and infrastructure engineer is gradually fading. They have to work together to yield the best performance from software and hardware infrastructure. Another major reason is the migration to the cloud where the operations team is not managing the hardware in a true sense and the focus has shifted to reduced cost of product delivery and better application delivery performance.

Prior to DevOps, the development team and the operations team worked in complete isolation. All were unaware of the current status of the project from each other’s perspective. This led to some obvious and unavoidable problems that hindered the progress of IT firms significantly. Some of these problems were included the following:

The solution to all these problems – though obvious now – were not very visible. It was important to introduce a systematic intervention that would alleviate all the problems, while at the same time would be easy to implement and be sustainable.

The introduction of DevOps in the IT industry was a paradigm shift towards better software development and delivery practice. It had the desired positive effects while keeping at bay the potential negatives.

The Power of Automation in DevOps Lifecycle Stages

Let’s flash back to the typical CR (Change Request) handling process in an organization. A customer initiates a CR through email or ticket submission using the help desk system. The operations team receives updates about the issues. They communicate the same message to the associated developers. The development team starts working on the same. Once the development work is completed based on the change request, the solutions are passed over to the testing team who get their testing environment ready, deploy the solution, and then communicate with the developer for any feedback. Finally, at the end of testing, the resultant solution gets deployed at the customer end.

This conventional method of change request implementation has many disadvantages. Process gaps, manual interventions, communication delays, and missing chains of information are some of them. Any latency in the transfer of information between customers and the development team is detrimental. Since multiple stakeholders are involved in the development loop, the much-treaded path can be prone to errors and miscommunications.

The post-development phase, testing phase, and post-deployment customer feedback stage all these steps involve various internal and external stakeholders. With manual interventions at each stage of DevOps system, the feedback loop is bound to suffer.

Automation is the lifeline. By leveraging integration technologies, we can actually bring the tools together as used by different stakeholders. With a proprietary integration platform, we can integrate tools from different phases of the DevOps cycle like BMC Remedy used by the operations team, Rally used by the engineering team, build tools like Jenkins, Hudson used by the development team and even testing tools used by the QA team. Once integrated we have the power to define an end-to-end automated DevOps process that spans across multiple disparate tools. This contributes to better sync among the teams and eventually faster and more accurate deployment and releases.

Automation Monitoring the Success of DevOps

Automation allows creating several real-time reports which provide a consolidated view of everything happening in a project. In an automated DevOps scenario, integration data across tools get automatically stored in a central repository. This allows users to generate various types of real-time reports such as:

With DevOps, we obtain a completely automated infrastructure with the following benefits:

DevOps as a contemporary practice that improves collaboration between development and operations teams. It helps reach a very high level of productivity by automating workflows. However, achieving automation across process flows is not an easy goal. Using integration technology, we can easily bring the tools together from different domains and break down the silos. And when all is hunky-dory, we obtain a complete solution for our desired integrated automated DevOps story.