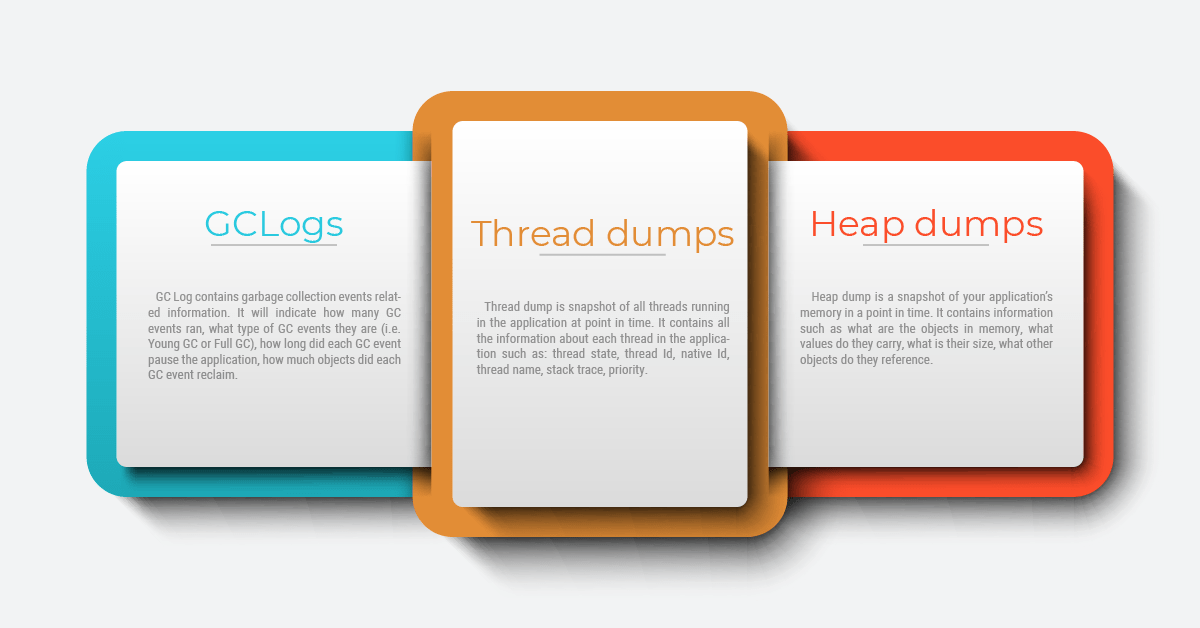 Java Virtual Machine (JVM) generates 3 critical artifacts that are useful for optimizing the performance and troubleshooting production problems. Those artifacts are:

In this article, let's try to understand these 3 critical artifacts, where to use them, how do they look, how to capture them, how to analyze them, and their differences.

GC Log contains garbage collection events related information. It will indicate how many GC events ran, what type of GC events they are (i.e. Young GC or Full GC), how long each GC event pause the application, how much objects did each GC event reclaim.

c) Where Are GC Logs Used?

You can generate garbage collection logs by passing the following JVM arguments:

For Java versions until 8:

For Java version starting from 9:

file-path: is the location where Garbage Collection log file will be written.

Garbage collection log format varies depending on who is your JVM vendor (Oracle, HP, IBM, Azul, ..), Java version (1.5, 5, 6, 7, 8, 9, 10, 11, 12,…), garbage collection algorithm (Serial, Parallel, CMS, G1, Shenandoah, Z GC) and JVM arguments you pass. Thus there is not one standardized format available. However here is a video tutorial, which attempts to help you to understand the GC log file format.

f) What Tools Are Used to Analyze a GC Log?

There are multiple Garbage collection log analysis tools. Some of the popular ones are given here: GCeasy, IBM GC & Memory visualizer, HP JMeter, Google Garbage Cat

a) What Is a Thread Dump?

A thread dump is a snapshot of all threads running in the application at a point in time. It contains all the information about each thread in the application such as thread state, thread Id, native Id, thread name, stack trace, and priority.

A sample thread dump can be found here.

c) Where Is a Thread Dump Used?

d) How to Generate a Thread Dump?

Thread dumps can be captured from the running application using 8 different options. The most common option to take thread dump is to use the ‘jstack’ tool. jstack tool is shipped in JDK_HOME\bin folder. Here is the command that you need to issue to capture thread dump:

e) How to Understand a Thread Dump?

Here is a video talk that gives a good detailed overview on how to understand the thread dumps.

f) What Tools Are Used to Analyze a Thread Dump?

A heap dump is a snapshot of your application’s memory in a point in time. It contains information such as what are the objects in memory, what values do they carry, what is their size, what other objects do they reference.

A sample heap dump can be found here. (Note: It is going to be in binary format. So you actually can’t read it).

c) Where Is a Heap Dump Used?

d) How to Generate a Heap Dump?

Heap dump can be captured from the running application using 7 different options. Most common option to take heap dump is to use the ‘jmap’ tool. jmap tool is shipped in JDK_HOME\bin folder. Here is the command that you need to issue to capture:

pid: is the Java Process Id, whose heap dump should be captured

file-path: is the file path where heap dump will be written in to.

e) How to Understand a Heap Dump?

Heap dump files are in binary format and tend to be large in size. Besides that, their format heavily lacks documentation. Thus, you have to use the heap dump analysis tools (given in next question) to analyze and understand them.

f) What Tools Are Used to Analyze a Heap Dump?