Open Policy Agent is an open-source engine that provides a way of declaratively writing policies as code and then using those policies as part of a decision-making process. It uses a policy language called Rego, allowing you to write policies for different services using the same language.

OPA can be used for a number of purposes, including:

OPA was originally created by Styra, and is now part of the Cloud Native Computing Foundation (CNCF), alongside other CNCF technologies like Kubernetes and Prometheus.

In this article, I will give an overview of Open Policy Agent, explain why you would want to use it, as well as showcase how you can use OPA with your Spacelift account. Although OPA can serve many purposes, I’m going to focus on how it can be used alongside Infrastructure as Code.

How Does OPA Work?

We can visualise how OPA works using the following diagram:

As you can see, OPA accepts a policy, input and query, and based on that, generates a response. The input can be any valid JSON document, allowing OPA to integrate with any tool that produces JSON output.

Why Would I Want to Use It?

In the following sections, I’ll go into more specific examples of using OPA that should help make things clearer but before I do, here’s a quick list of reasons why I’m interested in using OPA:

How to Use OPA With Terraform (Tutorial)

Let’s try to make that a bit less theoretical by using a specific example: Terraform. Terraform can produce a plan in JSON format via the terraform show command. This means that we can define policies for our infrastructure, and use OPA to make a decision about whether a plan is safe to apply or not:

For example, say we have the following Terraform definition to create an EC2 instance:

Now, say we want to ensure that every Terraform resource has a Name tag. We could enforce that by creating a file called plan.rego with the following content:

In order to use OPA to evaluate our policy, we need to take the following steps:

To get a JSON representation of our plan, we need to output our plan to a file, and then use the terraform show command to output that plan as JSON:

We can then use opa eval to evaluate our plan against our policy:

As you can see, we’re using the query data.spacelift.allow because our policy is loaded as a data file, and we defined our allow rule in the spacelift namespace. You can also see that opa eval produced an empty output ({}). This means that our allow rule didn’t evaluate to true, and so produced no output.

Let’s adjust our Terraform definition to include a Name tag:

Now if we generate our plan and evaluate the policy again, we should get a slightly different output:

This tells us that the allow rule has evaluated true. We can get that in a slightly more concise way by using the pretty format option:

At this stage, you can probably imagine how you could integrate this into your CI/CD pipeline to enforce naming schemes, security rules, and various other organizational policies.

The following examples illustrate some possible use-cases for OPA with Terraform. All of the examples have been taken from the Spacelift plan policy documentation, but have been altered to work with plain vanilla Terraform.

Example 1. Require human review when resources are deleted or updated

Adding new resources is usually a fairly safe operation, but updating or deleting existing resources can carry more risk. You could flag these for human review by using the following policy:

The following policy attempts to determine the risk of a particular plan by assigning different weightings to the change type (create, update, delete), along with the affected resource type (ECS cluster, EC2 instance, etc.). It takes the approach that an update or delete is more risky than a create because it affects an existing resource:

How can we make sure that our policies work as we expect them to and that they don’t break over time as we make changes to them? You guessed it: unit testing! Luckily for us, OPA has first-class support for testing via the opa test command.

TTo create tests for our policy, all we need to do is create another Rego file with a series of rules prefixed with test_. Each rule starting with that prefix defines a separate test.

Let’s go ahead and create a file called plan_test.rego, with the following contents:

As you can see, OPA makes it really easy to specify the policy input using the <variable> as <value> syntax. This allows us to create very concise tests by only including values we care about in the policy input, rather than having to use the entire plan output.

Unsurprisingly our test passes. That’s not very exciting, so let’s add a new test to ensure our resources include an Environment tag:

At this stage if you run the test command again it should show 2 passes:

If you want to know more about OPA testing, the official docs are full of great examples and information about what you can do.

At this stage, hopefully, you’ve got a pretty good idea of what OPA is as well as how it can be useful to you. It’s not too difficult to see how you could start integrating OPA into your development process or even use it as part of production systems.

Luckily for you, at Spacelift we’ve done all the heavy lifting, allowing you to reap the benefits of using OPA for Policy-as-Code without you having to implement everything from scratch yourself. In this section, I want to showcase some of the functionality that Spacelift provides as it relates to OPA.

Spacelift allows you to use OPA policies to manage various aspects of your Spacelift account, and not just during planning. For example, you can use policies to control who can log into your account, along with what they have access to.

Spacelift can automatically trigger planning runs whenever you push changes to your VCS provider. For example, here’s what you might see in GitHub after creating a PR:

If all goes well your check will succeed, but if a policy is violated, a failed check will be reported:

You can then view the details of the failure in Spacelift: 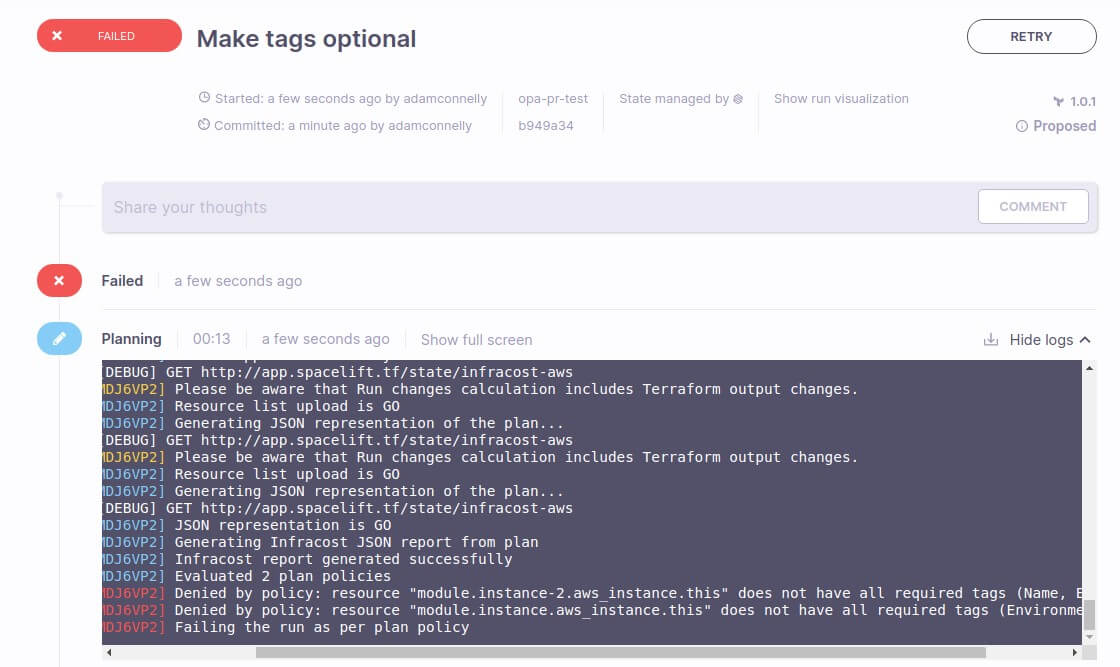 Spacelift plan policies use a slightly different format from the one we used in our example policies earlier in this post. Not only do they allow you to specify a message to be displayed, but also have the concept of deny and warn:

The deny rule fails the run completely, while the warn rule just displays a warning in the logs.

warn rules take on another role when a run is going to deploy changes (vs just showing the planned changes against a PR). If any warnings are reported during a deployment, the run will wait for manual approval before applying any changes.

Let’s use the following example policy, designed to warn if a certain set of suggested tags isn’t found within our resources:

If we then attempt to add resources that don’t contain all of those tags, Spacelift will block before applying the changes, and give us the chance to manually approve or deny the run: 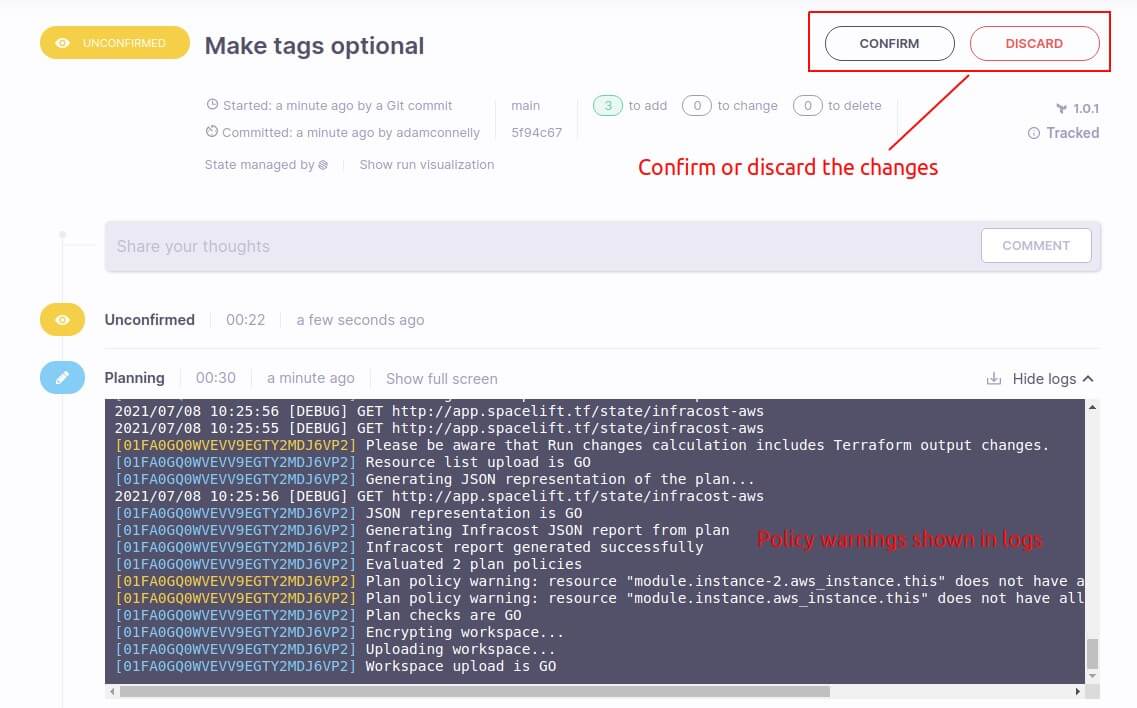 This allows you to build complex workflows where certain changes are completely blocked, while others are allowed as long as the changes are reviewed first.

Spacelift provides a Terraform provider for managing your Spacelift account. This means that you can manage the policies available within your account, along with the Stacks they apply to in code.

For example, to add the policy we defined earlier to Spacelift we can use the spacelift_policy resource like this:

We can then attach this policy to a Spacelift Stack using the spacelift_policy_attachment resource:

Taking this a step further, we could create a custom module for defining Spacelift Stacks that ensured that all Stacks had a certain set of policies attached by default.

I hope you’ve enjoyed this post, and can see the value that OPA brings to the table.

Published at DZone with permission of Adam Connelly. See the original article here.