What Is Visual Testing?

Visual testing is how you ensure that your app appears to the user as you intended.

In today's world, in the world of HTML, a web developer create pages that appear on a mix of browsers and operating systems. Because HTML and CSS are standards, front-end developers want to feel comfortable with a 'write once, run anywhere' approach to their software. Which also translates to "Let QA sort out the implementation issues." QA is still stuck checking each possible output combination for visual bugs.

This explains why, when I worked in product management, QA engineers would ask me all the time, "Which platforms are most important to test against?" If you're like most QA team members, your test matrix has probably exploded: multiple browsers, multiple operating systems, multiple screen sizes, multiple fonts — and dynamic responsive content that renders differently on each combination.

If you are with me so far, you're starting to answer the question: why do visual testing?

Why Do Visual Testing?

We do visual testing because visual errors happen — more frequently than you might realize. Take a look at this visual bug on Instagram's app: 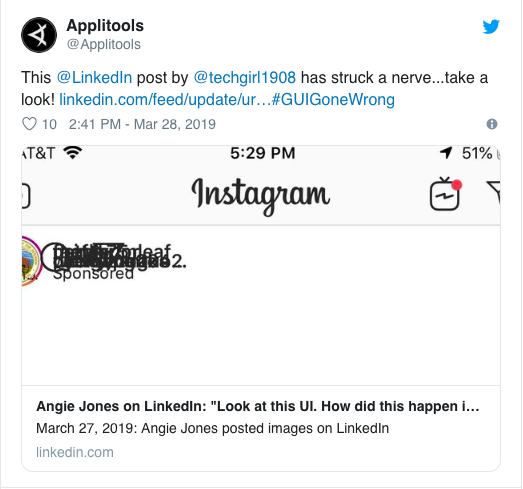 The text and ad are crammed together. If this was your ad, do you think there would be a revenue impact? Absolutely.

If you need to justify spending money on visual testing, share these examples with your boss.

All these companies are able to hire some of the smartest engineers in the world. If it happens to Google, or Instagram, or Amazon, it probably can happen to you, too.

Why do these visual bugs occur? Don't they do functional testing? They do — but it's not enough.

Sure, functional test scripts can validate the size, position, and color scheme of visual elements. But if you do this, your test scripts will soon balloon in size due to checkpoint bloat.

To see what I mean, let's look at an Instagram ad screen that's properly rendered. There are 21 visual elements by my count — various icons and text (this ignores iOS elements at the top like WiFi signal and time, since those aren't controlled by the Instagram app). If you used traditional checkpoints in a functional testing tool like Selenium Webdriver, Cypress, WebdriverIO, or Appium, you'd have to check the following for each of those 21 visual elements:

That means you'd need the following number of assertions:

Even with all this assertion code, you wouldn't be able to detect all visual bugs. Such as whether a visual element can't be accessed because it's being covered up, which blocked revenue in the above examples from Yelp, Southwest, United, and Virgin Atlantic. And, you'd miss subtleties like the brand logo, or the red dot under the heart.

You could end up with thousands of lines of assertion code — any of which might need to change with a new release. Trying to maintain that would be sheer madness. No one has time for that.

What Is Manual Visual Testing?

Because automated functional testing tools are poorly suited for finding visual bugs, companies find visual glitches using manual testers. Lots of them (more on that in a bit).

For these manual testers, visual testing behaves a lot like this spot-the-difference game:

To understand how time-consuming visual testing can be, get out your phone and time how long it takes for you to find all six visual differences. I took a minute to realize that the writing in the panels doesn't count. It took me about 3 minutes to spot all six. Or, you can cheat and look at the answers.

Why does it take so long? Some differences are difficult to spot. In other cases, our eyes trick us into finding differences that don't exist.

Manual visual testing means comparing two screenshots, one from your known good baseline image, and another from the latest version of your app. For each pair of images, you have to invest time to ensure you've caught all issues. Especially if the page is long, or has a lot of visual elements. Think "Where's Waldo"... If you're a manual tester or someone who manages them, you probably know how hard it is to visually test.

If you are a test engineer reading this paragraph, you already know this: web page testing only starts with checking the visual elements and their function on a single operating system, browser, browser orientation, and browser dimension combination. Then continue on to other combinations. And, that's where a huge amount of test effort lies — not in the functional testing, but in the inspection of visual elements across the combination of an operating system, browser, screen orientation, and browser dimensions.

To put it in perspective, imagine you need to test your app on:

If you're doing the math, you think it's the browsers running on each platform (a total of 21 combinations) multiplied by the two orientations of the ten mobiles (2×10)=20 added to the 18 desktop display resolutions.

That's a lot of testing for just one web page or screen in your mobile app. Except that it's worse. Let's say your app has 100 pages or screens to test.

Meanwhile, companies are releasing new app versions into production as frequently as once a week, or even once a day.

How many manual testers would you need to test 79,800 screen configurations in a week? Or a day? Could you even hire that many people?

Wouldn't it be great if there was a way to automate this crazy-tedious process?

What Is Automated Visual Testing? But, if you're not careful, you can go down an unproductive rat hole. I'm talking about Snapshot Testing.

What Is Snapshot Testing?

First generation automated visual testing uses a technology called snapshot testing. With snapshot testing, a bitmap of a screen is captured at various points of a test run and its pixels are compared to a baseline bitmap.

Snapshot testing algorithms are very simplistic: iterate through each pixel pair, then check if the color hex code is the same. If the color codes are different, raise a visual bug.

Because they can be built relatively easily, there are a number of open-source and commercial snapshot testing tools. Unlike human testers, snapshot testing tools can spot pixel differences quickly and consistently. And that's a step forward. A computer can highlight the visual differences in the Hocus Focus cartoon easily. A number of these tools market themselves as enabling "pixel perfect testing."

What Are the Problems With Snapshot Testing?

If you want to see some examples of bitmap differences affecting snapshot testing, take a look at the blog post we wrote on this topic last year.

Unfortunately, while you might think snapshot testing makes intuitive sense, practitioners like you are finding that the conditions for running successful bitmap comparisons require a stationary target, while your company continues to develop dynamic websites across a range of browsers and operating systems. You can try to force your app to behave a certain way — but you may not always succeed.

Can You Share Some Details of Snapshot Testing Problems?

For example, when testing on a single browser and operating system:

When doing cross-browser testing, you must also consider:

If you choose to pursue snapshot testing in spite of these issues, don't be surprised if you end up joining the group of experienced testers who have tried, and then ultimately abandoned, snapshot testing tools.

Can I See Some Snapshot Testing Problems in Real Life?

Here are some quick examples of these real-life bitmap issues.

If you use pixel testing for mobile apps, you'll need to deal with the very dynamic data at the top of nearly every screen: network strength, time, battery level, and more:

When you have dynamic content that shifts over time — news, ads, user-submitted content — where you want to check to ensure that everything is laid out with proper alignment and no overlaps. Pixel comparison tools can't test for these cases. Twitter's user-generated content is even more dynamic, with new tweets, likes, retweets, and comment counts changing by the second. Your app doesn't even need to change to confuse pixel tools. If your baselines and test screenshots were captured on different machines with different display settings for anti-aliasing, that can turn pretty much the entire page into a false positive, like this:

If you're using pixel tools and you still have to track down false positives and expose false negatives, what does that say about your testing efficiency?

For these reasons, many companies throw out their pixel tools and go back to manual visual testing, with all of its issues.

How Do I Use AI for Automated Visual Testing?

The current generation of automated visual testing uses a class of artificial intelligence algorithms called computer vision as a core engine for visual comparison. Typically these algorithms are used to identify objects with images, such as with facial recognition. We call them visual AI testing tools.

Unlike snapshot testers, AI-powered automated visual testing tools do not need special environments that remain static to ensure accuracy. Testing and real-world customer data show that AI testing tools have a high degree of accuracy even with dynamic content because the comparisons are based on relationships and not simply pixels.

Here's a comparison of the kinds of issues that AI-powered visual testing tools can handle compared to snapshot testing tools: 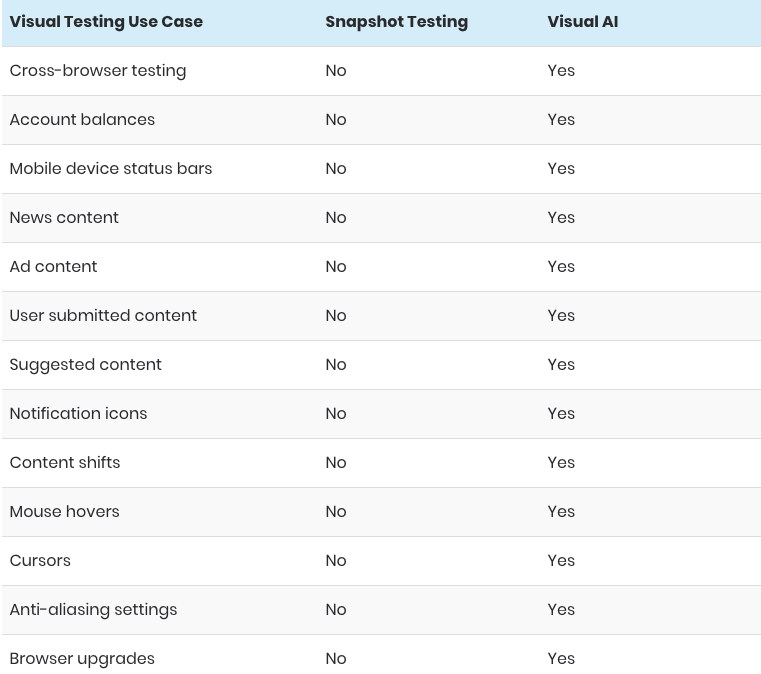 An AI-powered automated visual testing tool can test a wide range of visual elements across a range of OS/browser/orientation/resolution combinations. Just running the first baseline of rendering and functional test on a single combination is sufficient to guide an AI-powered tool to test results across the range of potential platforms

Here are some examples of how AI-powered automated visual testing improves visual test results by awareness of content.

Literally, every non-white space (and even some of the white space) is called out.

Which do you think would be more useful in your validation of your own content?

When Should I Use Visual Testing?

You can do automated visual testing with each check-in of front-end code, after unit testing and API testing, and before functional testing — ideally as part of your CI/CD pipeline running in Jenkins, Travis, or another continuous integration tool.

How often? On days ending with "y." AI-powered visual testing tools are a key validation tool for any app or web presence that requires a regular change in content and format. For example, media companies change their content as frequently as twice per hour use AI-powered automated testing to isolate real errors that affect paying customers without impacting. And, AI-powered visual test tools are key tools in the test arsenal for any app or web presence going through brand revision or merger, as the low error rate and high accuracy lets companies identify and fix problems associated with major DOM, CSS, and Javascript changes that are core to those updates.

More To Read About Visual Testing