perhaps you have identified an opportunity to implement iot initiatives in your company. however, you might be struggling to communicate this value to non-technical colleagues, especially decision makers in management, your ceo, or the executive board.

we want to help you successfully convey the value of iot and what tools exist to assist your business. in this three-part blog series called “how to convince your ceo to invest in iot,” we look to help you structure a proposition to assure executive officers or leadership of the benefits of implementing iot projects. in part 1, we will demonstrate the biased reluctance of decision makers considering iot and the possible organizational and institutional cause for this reluctance. then, in part two, we will explain the basic components iot and benefits of implementation and some examples of iot projects. lastly, in part three, we will conclude with the key questions with answers aimed to raise interest in iot projects.

why do companies struggle to adopt new technologies

mit sloan management review and capgemini consulting carried out a study titled embracing digital technology where researchers surveyed 1559 executives across multiple industries in order to identify how they were adopting digital technologies to improve their business. even though 78% of respondents claimed they would start their digital transformation in the next 2 years or have already had started, only 38% of respondents said that digital transformation was a permanent fixture in their business’ agenda. 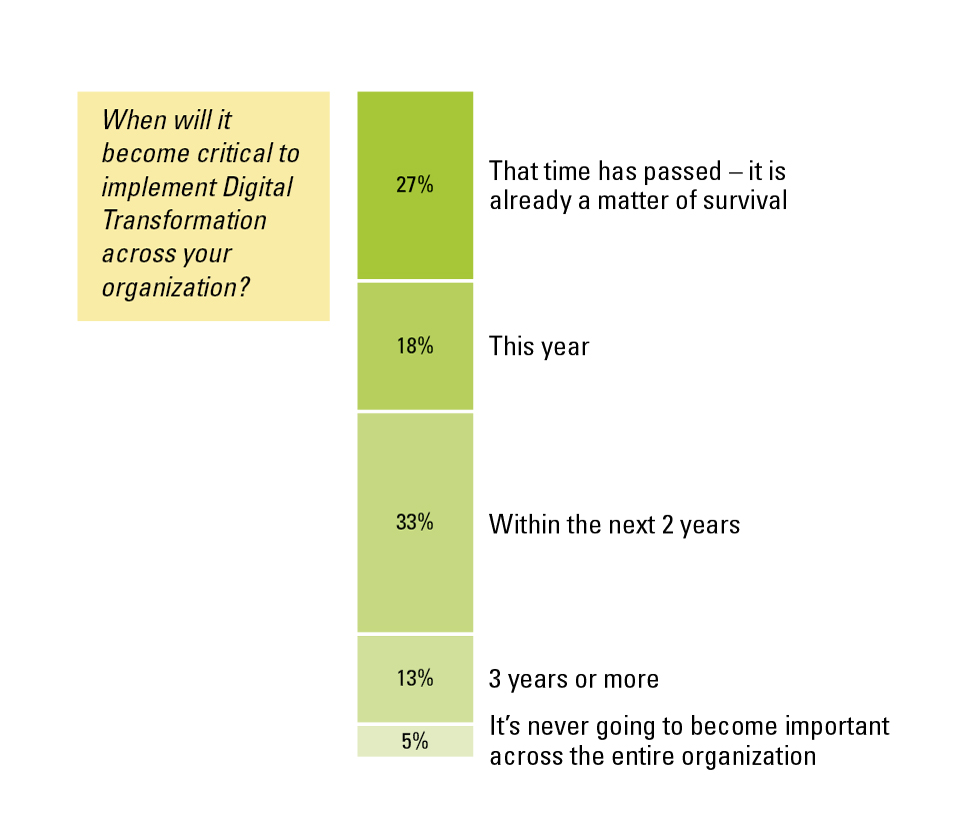 after identifying a large desire for digital transformation, but a lacking haste for integration, researchers asked respondents to answer a set of questions to assist researchers in determining their digital maturity category based on the digital maturity index developed by mit center for digital business and capgemini consulting. digital maturity referring to: “digital intensity, the level of investment in technology-enabled initiatives meant to change how the company operates. and transformation management intensity, the level of investment in the leadership capabilities needed to create digital transformation within an organization.” based on these factors, respondents were found to exist within this distribution.

mit's center for digital business and capgemini consulting findings suggest that more than half of surveyed companies fall within the lowest level of digital maturity. if digital technologies such as iot are already recognized by businesses as a critical path for success, we wonder what reasons are causing slow adoption even though digital technologies are desired? below are some organizational and institutional barriers that have been found to limit integration and decision making by management.

organizations are a group of people brought together for a common purpose and in control of their own performance. within organizations, a lack of urgency affects adoption of digital technologies with almost 40% of respondents failing to remain diligent in their efforts. often this “lacking urgency” is not a determining factor for avoidance but poor planning is. researchers found leaders want technology to help with everyday tasks, but a clear vision or roadmap for the digital transformation is typically missing or non-existent; thus delaying the integration process. possibly the most interesting findings of the survey is a clear split in the perception of urgency between the top managers at companies and those below them.

in fact, the further down the organizational ladder one goes, the less satisfied workers are with the quickness of digital transformation at their organizations. a third of c-level executives and board members think the pace of change is about right, and another 10% think it is fast, or even very fast. ceos are particularly bullish — 53% think the pace is right, fast, or very fast, the highest of any category. in addition to different expectations for the pace of change, here are some additional organizational barriers identified.

mit and capgemini’s research also suggests a deep-rooted perception that older people (referring to people over 50, according to a respondent) who commonly are the decision makers in companies, are technophobic; they are to say “fearful or disliking to advanced technology or complex devices and especially computers.” conversely, though, innovation is believed to be right around the corner as technologically supportive millennials begin to absorb leadership roles in businesses. “ in the next 10 to 15 years , we’re going to have the greatest transfer of knowledge that’s ever taken place,” says chip espinoza, director of organizational psychology at concordia university irvine.

the role of younger managers and iot

with this transfer of knowledge, we thought about the roles that future managers will have to fulfill and found edwina fitzmaurice , ey global advisory business development leader, to say it better than we could. edwina postulates that organizations are responding to the need to innovate by coupling the advantages created by iot with joining millennials to middle and upper-management since this generation quickly understands digital technologies. fitzmaurice also suggested that a new kind of leadership is required, where organizations should shift from efficiency-driven management to leaders that focus on creativity, innovation, growth and disruption. it is the later leader who will be able to disrupt the statuesque and push for efficient innovation.

past attempts for a digital transformation led to well-intentioned initiatives that failed to produce and resulted in legacy systems. companies with great trajectory have seen how past technologies over-promised results and became outdated or useless, which fosters skepticism and criticism for new implementations. should businesses be skeptic about the internet of things?each year, gartner releases the hype cycle study to help businesses discerning the hype from what is commercially available. according to techtarget , “the hype cycle is a graphical representation of the life cycle stages a technology goes through from conception to maturity and widespread adoption.” according to gartner’s hype cycle 2016 report, the internet of things is amongst the most over-hyped technologies , located near the “peak of inflated expectations” stage.

gartner forecasted that iot will take five to then years to reach the “plateau of productivity” . the firm mentions that the changing nature of technology itself and the lack of standardization in data, wireless protocols and technologies are the main reasons why widespread adoption is further than expected. hence, businesses need not necessarily be skeptical, but they should calculate their own expenses to entry and leave the proponents to over-promises.

according to the “embracing digital technology” study, the fast emergence of various digital technologies have resulted in what researchers described as innovation fatigue , which as consequence has low adoption or assimilation of innovative technologies in organizations; companies have been overwhelmed with software and firmware updates plus information overload all complicating the desire towards innovation.

andrew mcafee, principal researcher at the center for digital business, suggested at a talk about leadership complacency that companies need to include or develop individuals at the top of the organization who can scan the technology landscape to help to digest constant change. he also argued that once companies adopt innovation and disruption, they don’t stop. additionally, kimberly stevenson, intel’s cio stated “they’ve gone through erp, they’ve gone through byo, and they’ve gone through the cloud, and they think they’ve done it all. but the reality is, we’re only at the very, very beginning of this next generation of computing, and i think that every industry leader will be the ones that transform first. i don’t care what industry you’re talking about.”.

is there innovation fatigue around the internet of things?

citrix published predictions for the internet of things (iot) in 2016 , mentioning the rise of iot fatigue: the hype around iot is reaching a peak and, eventually, the hype bubble would burst . in the post, chris witeck said that we would see more commentary crushing this iot bubble and more cases of products with no clear business models. for example, there is a tumblr site called we put a chip in it , with a list of “useless” iot projects exposing the mania for connecting everything to the internet, even when the value clearly apparent for businesses and individuals.

the innovation fatigue that we currently see, we believe, has more to do with businesses failing to pinpoint that problem they want iot to solve and hope that if they invest, iot will provide the answers. this is not a practical use of iot and we want to warn again this tendency and instead suggest that if iot is to accelerate your business, gather all your data, use better and newer analytics, and employ the iot to provide feedback on inefficiencies in a current business cycle and use this information to improve.

in the same sloan and capgemini study, 21% of respondents suggested that internal politics hold back technology due to the leaders’ fear of losing power in the organization. as a contingency, companies apply governance mechanisms such as cross-functional steering committees or specific digital leadership roles.

do companies need a chief iot officer? according to techtarget , a chief iot officer is an executive title given to a person at an enterprise in charge of how products that support the internet of things are developed and implemented to best support company objectives and goals.

among other responsibilities, an iot role for c-level positions includes ensuring data privacy and security, leveraging data analytics for boosting sales and marketing efforts, and working with r&d and product design to implement projects that help meet the company's overall goals and objectives. webroot , a uk information security company ran a study called iot: risk or reward (2016), in which the found half of the 500 surveyed ceos were considering to employ a chief iot officer for the next year. does your business have a chief iot officer? if you are looking to implement iot, should your business have a chief iot officer to combat the 21% of people who believe internal politics restrict technological innovation?

now that we better understand some barriers to digital evolution and iot integration, what’s next? in part 2/3 in our how to convince your ceo to invest in iot series, we will demonstrate how to explain the internet of things to non-technical leadership and the benefits of integration.