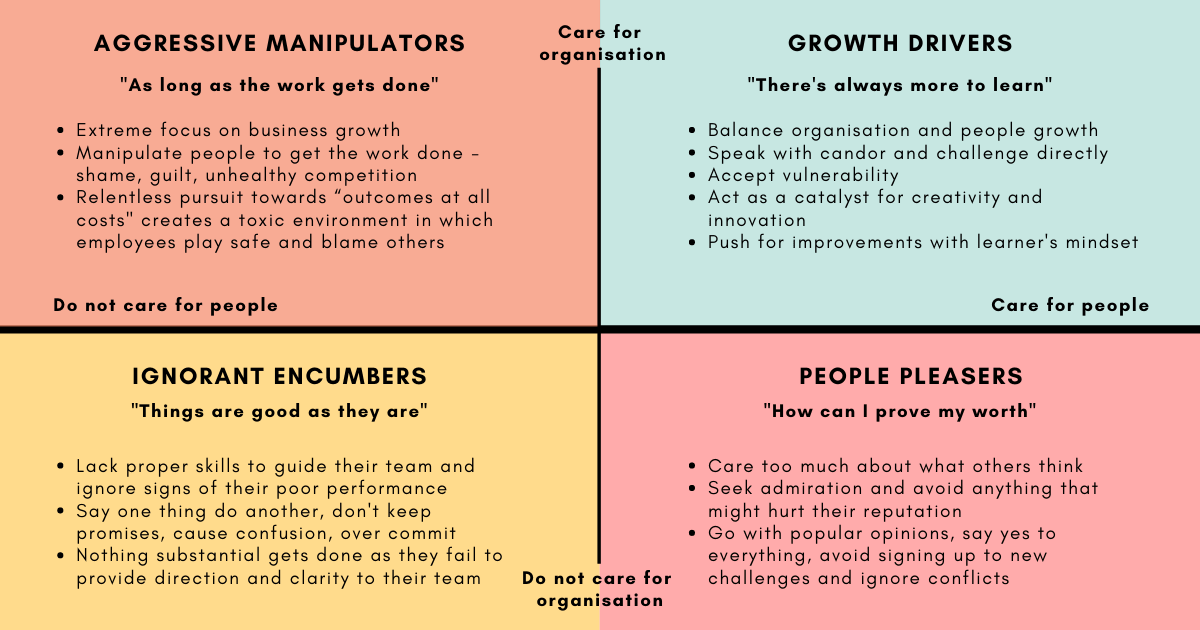 Signing up to be a manager is an act of great courage. Breaking our existing mold ready to be cast into a new one is no easy feat. It has many of the same challenges that we face when making a move from school to college, deciding between careers, and accepting a job.

While the change demands letting go of our existing identity and embracing a new one with openness and curiosity, it's our mindset that determines what we make of it. Do we consider it as an act of vulnerability rooted in the desire to learn and grow or armor to protect ourselves from the challenges that lie ahead?

Being vulnerable is not a sign of weakness. It's the courage to get up when we fall, push forward despite being scared of what lies ahead, and show up even when we fail. It's based on a learning and growth mindset.

When we put on an armor of self-protection, we choose defensiveness over curiosity, portray behaviors that mislead others or try to impress them, do not stay true to our own values, and make decisions to shield ourselves from the discomfort that comes from not having all the answers.

What separates a good manager from a bad one is in this choice — do they accept vulnerability and commit to learning or put on armor and try to save themselves?

Committing to give up this armor is not as easy as it sounds. It requires going against our deeply ingrained behaviors and fighting up to our fight-or-flight tendencies when faced with difficult situations at work.

Many managers despite having this knowledge fail to put it into practice. It's one thing to be aware of and another to be intentional about it.

Without being intentional, it's easy to lose focus and make questionable choices when entrusted with the responsibility that comes with being a manager — balance the needs of the organization and its people, optimize short term demands without overriding long term focus, forgo sunk costs to realize better opportunities, accept a good enough solution instead of chasing a perfect one, deciding too early to being stuck in analysis paralysis and being brave in the face of insurmountable conflicts.

4 Types of Managers and The Mindset that Drives Their Behavior

What type of manager are you?

Based on my data collected from working with hundreds of managers over the years, I see each manager takes up a primary role in one of these 4 quadrants:

Aggressive Manipulators — 'As Long as The Work Gets Done'

These managers operate with an extreme focus on driving business growth while losing their sense of humanity.

They manipulate people to get the work done by shaming them, creating unhealthy competition between team members, use guilt to push through unrealistic targets, and do not shy away from abusive language when people fall short of their expectations.

The relentless pursuit towards 'outcomes at all costs' creates a toxic environment in which employees play safe due to their fear of failure, blame others instead of taking responsibility for their mistakes, and may even engage in unethical practices to cover their ass.

This happens because people have no incentive to help others — but do have an incentive to undermine, bad-mouth, and demoralize coworkers, because pushing down others decreases the competition they face. Performance also suffers because hard workers who aren't anointed A players become bitter and withhold effort. — Robert I. Sutton

While their teams crumble behind the scenes, these managers draw attention and appreciation from senior execs due to their ability to drive business objectives.

In organizations with a toxic culture, leaders of the organization turn a blind eye to this behavior. As these managers continue to rise through the ranks, they feel entitled to abuse their employees.

People Pleasers — 'How Can I Prove My Worth'

With every decision rooted in reward and punishment, these managers care too much about what others think and how they will react.

With their sense of self-worth tied to external validation, they develop a deep desire to seek admiration, look for opportunities that make them shine, and avoid anything that might hurt their reputation.

This makes them go with popular opinions as opposed to standing up to what's right with the belief that disagreement implies disrespect, say yes even when the request does not align with their goals with the fear that others will judge them for saying no and it will hurt their reputation, prefer to do things themselves instead of delegating to their team members with the assumption that independent value creation is the only path to establish credibility, avoid signing up to new challenges with fear of failure and ignore conflicts instead of sharing their honest opinion to avoid hurting others.

Being a people pleaser stalls the growth of their team as employees waste time in doing work that does not align with their goals, stick with bad decisions, miss opportunities to take on challenging assignments, do not feel empowered to make their own decisions and on top of it have no sense of how they are doing or what they can do to improve.

People's dissatisfaction will fester beneath the surface until one day they surprise you with their resignation. And most of the time when that happens, they're not just quitting your company, they are also quitting you. —  Julie Zhuo

The protective armor adopted by these managers ends up in job dissatisfaction, disengagement, and ultimately high turnover.

Ignorant Encumbers — 'Things Are Good as They Are'

Managers who live with a false sense of reality pick bits and pieces of information that validates their point of view while ignoring everything that contradicts it.

They build an illusion of greatness by ignoring signs of their poor performance and fail to gather feedback on how others perceive their actions. They do not act out of a desire to cause damage but are simply incompetent. Without proper skills to guide their team or awareness of the lack of it, they act as a burden for their team.

They say one thing and do another, fail to keep up their promises, cause confusion in the team with conflicting priorities, over commit due to their lack of understanding of the complexity of the project, do not set standards on quality and acceptable behaviors in the team.

Their ignorance and incompetence hamper their team performance and nothing substantial ever gets done since they fail to provide direction and clarity to their team, chase opportunities without proper strategies, fail to fix things before it's too late, and do not show up when their team needs them.

Without acceptance of their incompetence and taking action to build the necessary skills, they become a source of stress, frustration, and anxiety in the team. The mindset 'things are good as they are' leads to mediocre performance.

While being results-oriented, these managers genuinely care for the success and well-being of their people. They balance the needs of the organization and their people by giving up traditional management styles and devising new strategies rooted in open-mindedness and learning.

They challenge directly to push people out of their comfort zone and shoot for excellence, while not hesitating to speak with candor when dealing with difficult situations.

They aren't perfect nor claim to not make any mistakes. Rather, they accept vulnerability to create a culture in which doing the right thing is considered more important than being right. They say 'I don't know' often to highlight the importance of learning from others as opposed to being the one with all the answers. They accept mistakes and share their learnings thereby encouraging others to feel safe in owning up to their mistakes instead of hiding behind them.

They act as a catalyst for creativity and innovation by creating the necessary space and providing opportunities to enable their team to put their critical thinking skills to use. By sharing context on why and what, they enable their team to determine the how. They empower their team to make decisions by establishing decision boundaries, building competence, providing clarity, and implementing a feedback loop into the learning process. Instead of safeguarding their team every step of the way, they lead with trust.

With a learner's mindset, they constantly push for improvements by seeking feedback on how they are doing and what they can do to be better.

People naturally grow around them since they bring out the best in each individual by utilizing their strengths. You can see it in the way people speak about work and how they love being part of their company's growth.

I believe the best managers acknowledge and make room for what they do not know—not just because humility is a virtue but because until one adopts that mindset, the most striking breakthroughs cannot occur. I believe that managers must loosen the controls, not tighten them. They must accept risk; they must trust the people they work with and strive to clear the path for them; and always, they must pay attention to and engage with anything that creates fear. — Ed Catmull

Give up Your Armor

What type of manager did you identify yourself with — are you an aggressive manipulator, people pleaser, ignorant encumber, or a growth driver?

It's not too late to make the shift to a growth driver. Giving up your armor won't be easy, but it's possible by accepting where you stand, setting your mind to getting it right, and being intentional about your actions.

Give up your armor by asking these questions whenever you find yourself running for your shield:
Leaving you with these thoughts from Brene Brown: 'Vulnerability is not weakness, and the uncertainty, risk, and emotional exposure we face every day are not optional. Our only choice is a question of engagement. Our willingness to own and engage with our vulnerability determines the depth of our courage and the clarity of our purpose; the level to which we protect ourselves from being vulnerable is a measure of our fear and disconnection.'