For more than 30 years, the Game Developers Conference (GDC) has been one of the prominent events for displaying the most innovative video game technology to developers around the world. Each year, more than 28,000 developers gather for one week and learn about the advancements taking place in the video game industry and share the techniques and technologies shaping the future of gaming. This year, GDC will run from Monday, March 18 until Friday, March 22 in San Francisco, CA.

In this series, we will cover the significant updates from GDC 2019 each day of the week and recap the conference after its conclusion on Friday, March 22. Even if video games are not the reader's specialty or not of particular interest, GDC 2019 will likely include many noteworthy announcements and innovations that will ripple far beyond video games. Regardless of background, it is essential to digest the wealth of information and transformative technologies that will emerge from San Francisco next week.

Many of the largest tech companies will be present at GDC 2019, conducting keynote speeches, tech-talks, discussions, Q&As, and live demonstrations throughout the week. These talks and presentations will incorporate game streaming, cross-platform gaming, AI, and VR/AR, as well as provide insight into the direction that these companies are headed in 2019 and beyond. Below is a list of the some the major companies attending GDC this year. For a comprehensive list of companies joining the conference, see the official GDC schedule.

Apart from the above list, there will also be numerous other companies at the conference, including Sony Interactive Entertainment (the gaming and entertainment subsidiary of Sony of America), who will be hosting multiple events and talks throughout the week, and Nintendo—although Nintendo does not have any significant talks or events scheduled for the week. Nevertheless, Nintendo has a lot of excitement swirling around it, as we will see in the following sections.

While there are dozens and dozens of major events taking place during the week, some addresses, such as keynotes, stand apart from the others. Below is a schedule of the principal events hosted by the above companies throughout the week. For a complete list of presentations at GDC, see the official GDC Schedule. For more information on VR-specific events during the week, see AndroidPIT. 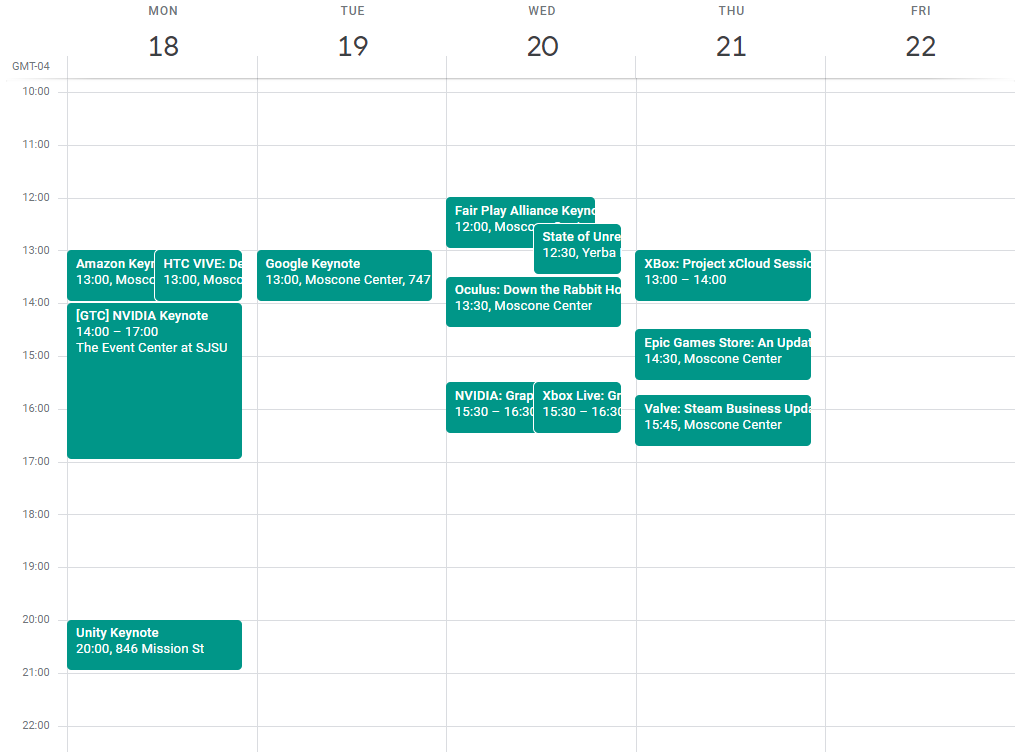 The Talk Going In

With so many large companies gathering in San Francisco, context about the current state of the gaming industry is essential. The gaming community is a very engaged and informed group, and in recent weeks, a few significant rumors have been floating around, including Google announcing a gaming console, Microsoft and Nintendo partnering up, Valve and Epic Games going head-to-head in the store-wars, and the increasing popularity of unionization in the game development circles.

Rumors have been flying that Google may be entering the console market—and soon. With the conclusion of Project Stream—which allowed users to stream Assassins Creed: Oddyssy—the question now becomes: Where will Google take its video-game streaming technology? Recent patent filings may provide some insight, and it looks as if Google will be creating a new controller for what many assume is a new streaming-only console. Below is a third-party rendering of the new controller, along with the original image from the patent (source):

To add to the hype, Google announced in a Tweet that Amy Hennig and Raph Koster would be joining a Google panel at 6:00 pm EDT on Tuesday (Mar. 19): 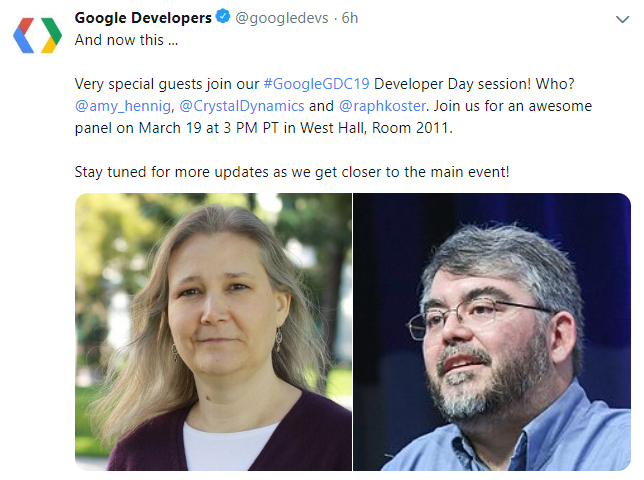 The inclusion of these two game developers hints that Google has something big up its sleeve for gaming. While all of this is speculation, the evidence is starting to mount, and if this rumor does turn out to be true, it will completely change the gaming landscape. Not only will the addition of such a monumental competitor shift the dynamics of the gaming industry, but this particular console may accelerate the move towards game-streaming and GaaS.

For more information, see the following videos and articles:

It is no secret that Sony's PlayStation 4 (PS4) has thus far been the victor of this console generation, selling over 94 million units compared to 39 million Xbox Ones and 32 million Nintendo Switches. Even so, Sony's animus towards cross-play has allowed Microsoft and Nintendo to band together to take on the eighth-generation giant. Nintendo went so far as to create a Minecraft Cross-Play Trailer, simultaneously taking a swipe at Sony and looking buddy-buddy with Microsoft.

Amid this collaboration, rumors have been swirling that Xbox Live and Xbox Game Pass may be coming to the Switch soon. This addition would be a monumental leap in the video game industry, as it would likely allow a large portion of the Xbox library to be playable on the Switch.

While this would be an industry-altering move, there are some problems with bringing Game Pass to Switch. First, some of the games including in Game Pass already exist as native games on the Switch. This conflict could cause some legal concerns on the part of game developers (i.e., a developer may restrict Game Pass from allowing their game to be streamed on the Switch if it can be bought natively for the Switch). Second, if Game Pass and Xbox Live do come to Switch, where does that leave Nintendo Switch Online (NSO)? Many consider NSO to be lackluster in comparison to PlayStation Network and Xbox Live, so would Nintendo want a superior online service to exist alongside NSO?

According to the grapevine, this rumor is likely to come to fruition, although the details of its implementation are still uncertain. It is also unlikely that Microsoft would announce this news at GDC: Being that Sony announced it would not be coming to Electronic Entertainment Expo (E3) 2019, E3 may be an opportunity for the two remaining console makers (namely, Microsoft and Nintendo) to pair up and share the spotlight with a major announcement. Regardless of when this rumor comes to fruition (if it does), GDC will play a critical role in this shift towards game-streaming and cross-platform play. The Xbox Live cross-platform SDK demo on Wednesday and the Project xCloud talk on Thursday, in particular, will provide great insight into where Microsoft is headed, and may even offer some insight into Game Pass being available on the Nintendo Switch in the future.

For more information on this rumor, see the following:

There has been a not-so-nice competition between Valve's Steam and the Epic Games Store to be the top-dog in the video game store-front arena. To say that this war has turned ugly is an understatement. After announcing that Metro: Exodus would be exclusive to the Epic Games Store—and confusion ensued about the fulfillment of Steam pre-orders—fans review bombed the other games in the series in retaliation. Additionally, speculation has arisen that Epic Games Store also collects users' Steam information in a concealed manner, which has further detracted from Epic Game Store's consumer sentiment.

More recently, Microsoft announced that the Halo: Master Chief Collection would be coming to PC, and in addition to being available on the Microsoft Store, would also be available on Steam. This news was a significant win for the Steam corner, but it is not the end of the story. As seen in the GDC: State of the Game Industry 2019 report, many developers are still not happy with Steam and think that Valve's cut of the game-revenue pie is too large for how little Steam provides.

With this fierce competition as a backdrop, Epic Games will present its Epic Game Store: An Update and Q&A at 2:30 pm EDT on Thursday and Valve will show what it brings to the table in its Steam Business Update at 3:45 pm EDT on Thursday.

Although not directly related to technology or software, there has been a tectonic shift taking place over the last few years in the gaming industry. While software and software development have tended toward open and unregulated management (i.e., open-source), it appears that recent stories of overworked game developers have brought up the idea of unionization.

According to the GDC: State of the Game Industry 2019 report, 47% of developers polled believe game developers should unionize. Strikingly, only 16% of those surveyed said no, with 26% saying maybe and 11% undecided. Interestingly, only 21% of respondents think workers in the industry will actually unionize. Most were unsure, with 39% answering maybe and 24% answering no. One developer went so far as to say the following:

When one executive can get a $20 million bonus in exchange for crunching hundreds of people, shipping before the game is ready, the laying off those people, the industry is ripe for self-correction.

While is it uncertain if workers in the game industry will eventually unionize, there is a roundtable scheduled for Thursday at 7:00 pm EDT to discuss unionization. If the gaming industry does decide to unionize, it will change the nature of software development and has the potential to spread further than just game development.

PC Is Still King & Switch Is the Up-and-Comer

Year after year, PC has consistently been the platform of choice for game developers. This dominance is unsurprising. Creating games for the PC is a natural feature of most game engines, PCs allow for unlocked framerates, and the hardware available for PCs means there is a large upper-bound for performance. According to the GDC: State of the Game Industry 2019 report, 66% of developers are currently developing games for PC, while 38% are developing for smartphones and tablets, 31% are developing for PS4 and PS4 Pro, 28% for Xbox One and Xbox One X, and 18% are developing for the Nintendo Switch.

Interestingly, when polled about the platform that most interests developers right now, the Nintendo Switch jumps out in the console race, with 45% of developers saying that they are interested in developing for the Switch. The PC still commands the lead with 60%, but PS4 and PS4 Pro pull in behind the Switch with 38%, smartphone and tablets follow up with 33%, and Xbox One and Xbox One X fall behind with 28%.

With the rise of the Nintendo Switch since its launch in March of 2017—on the heels of the disastrous Wii U lifecycle—Nintendo may have earned its place back with the big boys (e.g., Sony and Microsoft). What's more, Nintendo has successfully positioned the Switch to be one of the most successful consoles in the current generation—and will likely give the PS4 a run for its money for the top spot. With Nintendo's release of AAA games such as Pokemon and Animal Crossing in late 2019, the possible announcement of ninth-generation consoles by Sony and Microsoft in 2019 and 2020, and the foreseeable inclusion of Google in the console market, the world of gaming is about to experience a shake-up for the remainder of the year into 2020.

Coverage During the Week

This series will cover each day of GDC 2019, releasing a new article at the end of each day, capturing the events of that day and what they mean for developers. With so much talk (and hype) going into this GDC, there will likely be a lot to cover and even more to analyze. The goal of this series is to bring to the most pertinent information to the reader in a concise but exciting way and provide avenues for obtaining more details throughout the week.