Day 2 at the Game Developers Conference (GDC) 2019 was without a doubt dominated by the announcement of Google Stadia, a cloud-based game streaming platform. This service—scheduled for release in 2019—is set to change the landscape of gaming for many years, but it does have some serious unanswered questions and could be less than a dominant force in the gaming market. Not to be lost in the shadows, Tuesday also saw the partnership between Unity and Tencent, bringing the capability of the cloud to the rugged game development engine.

Google announced its new cloud-based streaming service, Stadia, during its 1:00 pm ET keynote; although some details are lacking, the technology looks promising. Stadia is a game streaming service built on top of the Google Data Center network, which includes over 7,500 edge nodes and is connected by high-speed fiber-optic links around the globe. While game streaming services have been lackluster in the past, Google appears to have the technology and network backbone to support its attempt at this type of service.

The vision of Stadia is to combine the three most essential aspects of gaming:

In the words of Phil Harrison, vice president at Google:

[Stadia is] focused on gamers, inspired by developers, and amplified by YouTube creators.

The combination of computing power and ubiquity of devices practically removes any technical limitations for game developers. Google espoused this concept throughout the presentation: unleash the full potential of developers to create games without having to scale down their imagination due to hardware and visual limitations.

Google went so far as to ask developers what they wanted in a platform directly, and based Stadia on the three most common requests:

While these appear to be lofty goals, Google has put its full weight behind Stadia and seems intent on driving Stadia to its full potential.

During October of last year, Google beta-tested its Stadia service through Project Stream, which allowed users to play Assassin's Creed: Odyssey through Google Chrome, all without downloading any additional software. The results were surprisingly good, as most expected a game streamed through a browser to be of poor quality and have high latency. Instead, Odyssey streamed in an impressive 1080p resolution at 60 frames per second (fps).

With Stadia, Google promises to take that quality to the next level, pledging support for 4k resolution, 60 fps, and surround sound. Remarkably, Google even claims that its Stadia nodes will be able to support 8k resolution and 120+ fps in the future. While 8k is currently sparse in most homes, Google is preparing the way for future games to include the best possible resolutions available. This performance is made possible by AMD-supplied compute nodes, which sport more graphic-computation power than the PlayStation (PS) 4 Pro and Xbox One X combined (image from Stadia presentation): 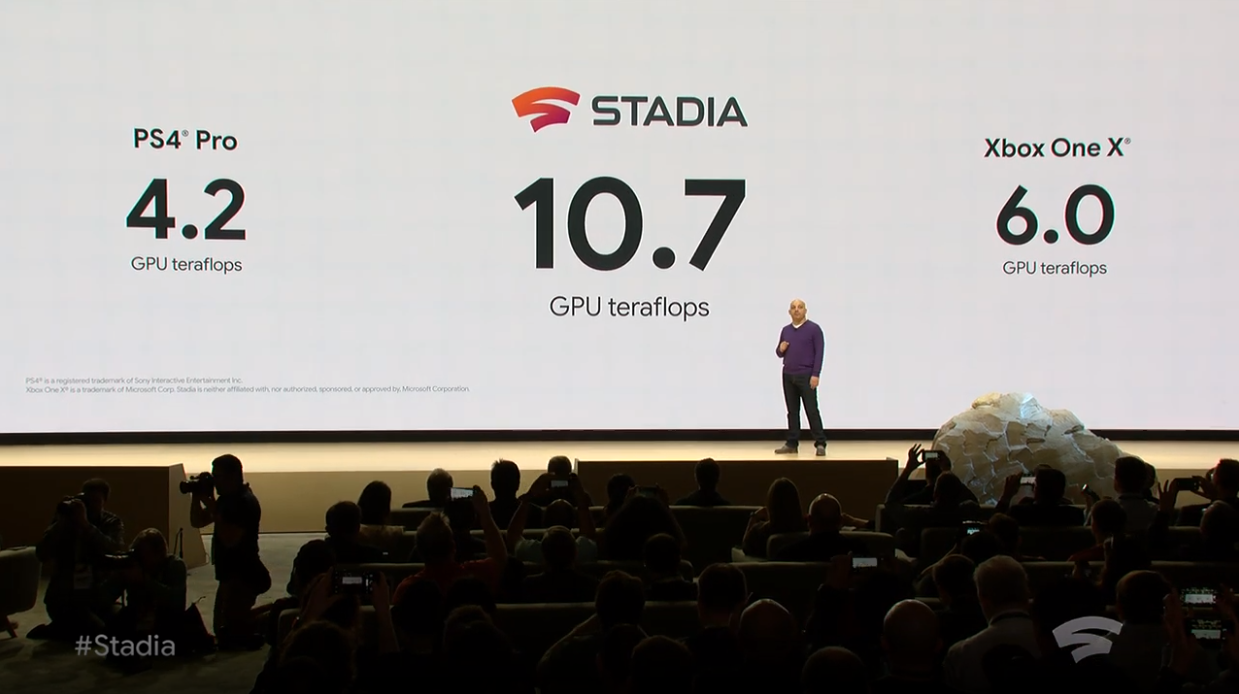 Stadia also expands the set of supported to devices to include:

To facilitate game streaming on such a wide variety of devices, Google also announced the launch on the Stadia Controller. This controller has the standard buttons expected for a game controller, but also includes two additions: (1) a Google Assistant button and (2) a capture and share button. The Google Assistant button allows a user to ask a question through the microphone included in the controller. This functionality makes the task of finding help in a game seamless: Instead of opening a separate device and searching for help, Google Assistant will attempt to find the help you need and immediately display it on the same machine as the streamed game.

The capture button interconnects with YouTube, allowing a player to capture and share an experience on YouTube with themselves, their friends, or the entire world. This connectivity with other Google products creates a seamless experience that removes a great deal of the friction commonly seen in gaming (image from Stadia presentation): 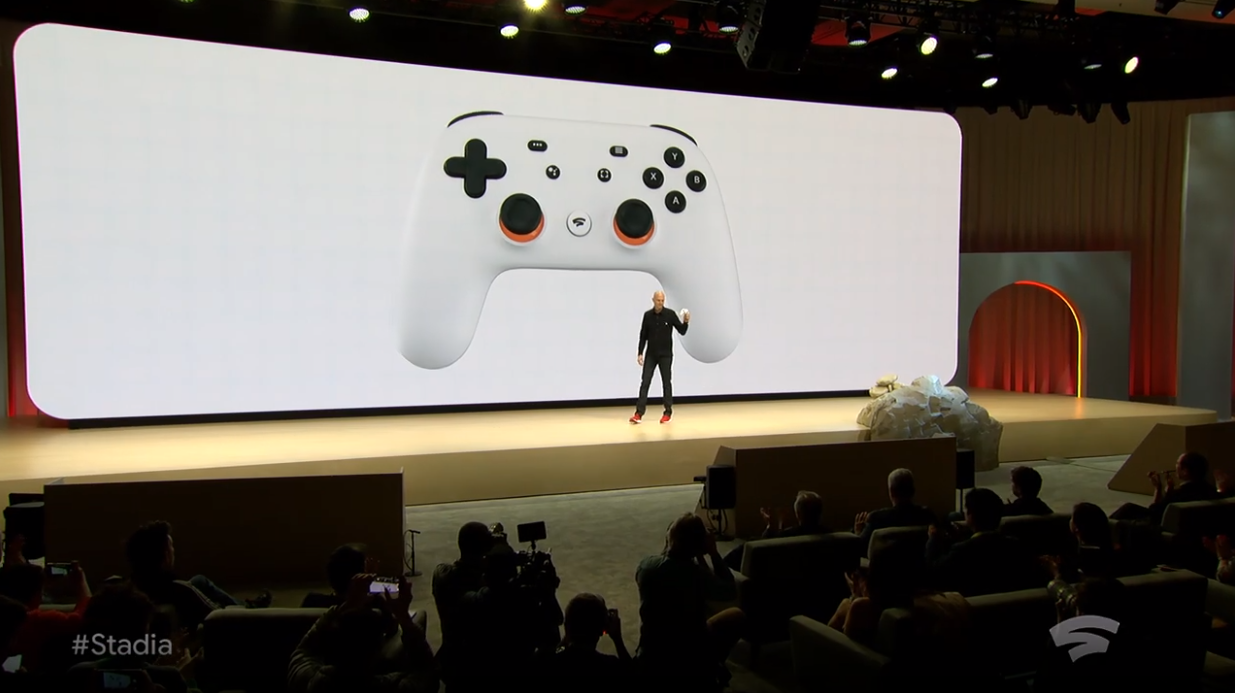 Gaming in the Cloud

The use of cloud infrastructure to support game streaming also changes the scene for multiplayer gaming. Co-locating the nodes (in the same network) responsible for executing a game means messages between the game instances never span across the public internet, and the only connection that is of concern is that of each gamer and the server (i.e., messages from one game instance to another never leaves within the Google Data Center infrastructure). This proximity means that Stadia provides the following benefits for developers:

These benefits combine to give a smooth multiplayer experience, but there is still one problem: The internet connection between the player and the Google Data Centers. If this connection is slow or disconnects completely, the streaming service becomes completely unavailable (i.e., no offline play).

Google announced that is has been working with id Software and Doom: Eternal will be a launch-day release for Stadia. In addition to this launch title, it has already shipped out over 100 development kits, and over 1,000 developers and creators are currently working with Stadia.

Moreover, it has partnered with both Unity and Unreal to ensure that the two most popular game engines work with Stadia out of the box. Stadia's utilization of the Vulcan open-source Application Programming Interface (API) also significantly reduces the hurdle from development to deployment in this cloud architecture. For more information on the development support for Stadia, see the Stadia developer website at stadia.dev.

While Stadia is groundbreaking and has the full support of Google—including the creation of Stadia Games & Entertainment Studio—there are still some vital questions without answers:

Stadia does have a lot of promise, but at the moment, it is difficult to tell how successful it will be in the long run. It is too soon to know how this service will ring with gamers and if the gaming community will latch onto Stadia. More details presented before making a definitive determination can on the viability of such an ambitious project.

This article only captures the most pertinent information presented by Google about its new game streaming service, and there is a sea of information flooding in every hour. For more information on the importance of Stadia, see Sarah Sinning's DZone article. For additional Stadia information, see the following:

(For the record, the article speculating the leak of Google's streaming service logo—as seen in Monday's GDC update—was correct.)

Unity continued its series of partnership with an announcement late on Monday that it will partner with Tencent and incorporate Tencent Cloud into Unity. This has two main benefits for game developers on Unity: (1) the cloud-capability of Tencent can now be utilized and (2) since Tencent—which Unity CEO, John Riccitiello, called its connected games partner—is a Chinese company, an avenue is now available to sell games in China, which is often considered a closed market. According to Riccitiello:

With the largest gaming community base, it is no secret that Tencent is an expert in powering the best and the brightest and the most successful in China. 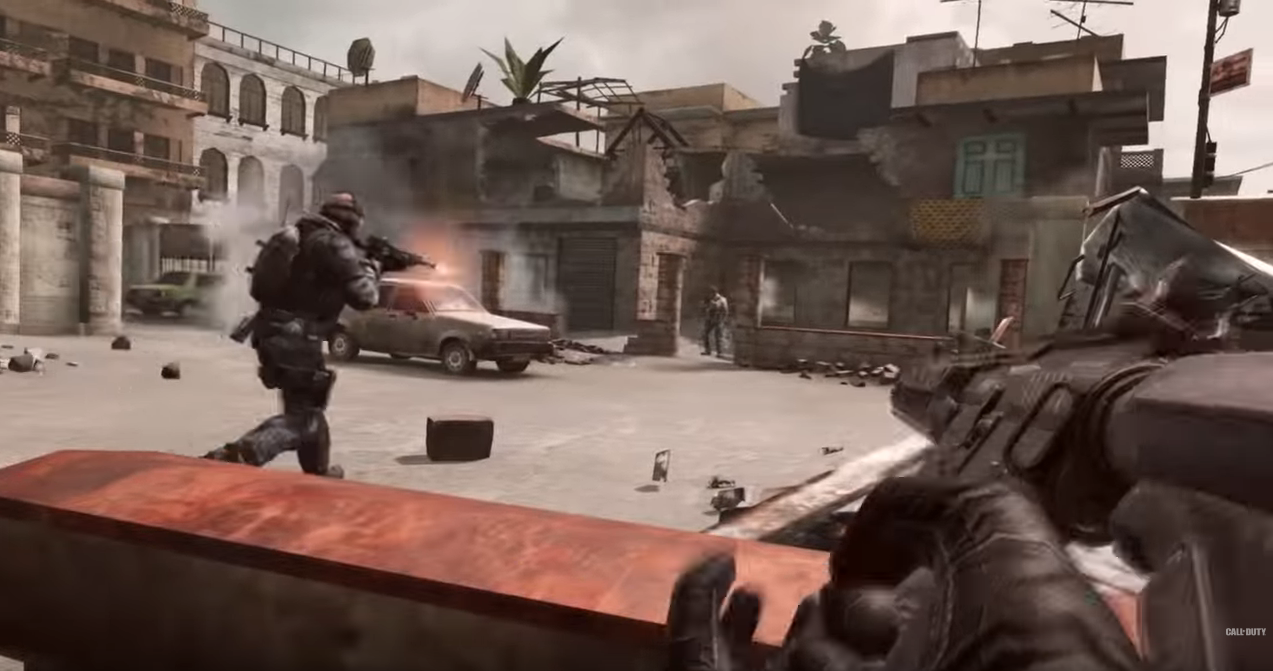 While Tuesday was quite a packed day, GDC still has plenty planned for the rest of the week, including the following events from prominent vendors for Wednesday: